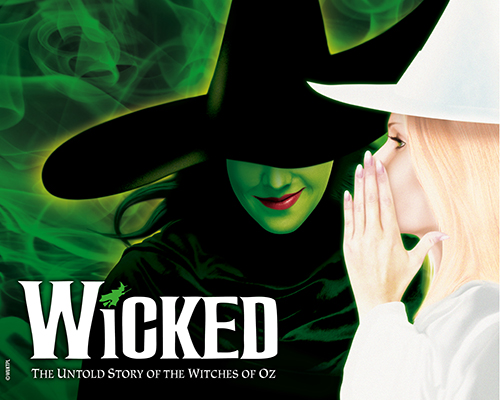 As a self-confessed musical theatre nerd, I have always been slightly disappointed in myself for not seeing the supposed ‘musical of all musicals’, which comes in the form of Stephen Schwartz’s Wicked. Since seeing intriguing extracts and songs performed, I have always wanted to find out the full story of this ‘prequel’ to The Wizard of Oz, telling the tale of how the Wicked Witch of the West really became that evil (hence the show’s title). And believe me, upon actually watching the show, it was a truly wicked performance in every sense of the word, and certainly left the audience hungry for more!

It is worth mentioning for those Oz fans among you that this show is a must-see. Hints, puns and in-jokes galore create a sense of mystery and magic that extends far beyond the wonderful special effects, set, costumes, and general mise-en-scene of the production. Since its beginnings on Broadway, Wicked has become a smash-hit that has broken box-office records worldwide, and it is easy to see why.

It was a truly wicked performance in every sense of the word.

At the Lowry Theatre, Manchester, there was not an empty seat in the auditorium, as people had travelled from far and wide to see this landmark UK tour. Playing a fierce, yet strangely pitiful Elphaba (the Wicked Witch), Ashleigh Gray delivered a fantastic performance – bewitching the audience with her powerful vocals and true heartfelt emotion, especially on the showstopper ‘Defying Gravity’. Similarly, Emily Tierney was a comical, clumsy and surprisingly heart-warmingly ‘Popular’ Glinda the Good. Additionally, the development of the relationship between the characters was played out in an excellent and believable style by these two talented actresses, who truly deserved their standing ovation at the end of the performance. An icily beautiful Carina Gillespie playing Elphaba’s sister Nessarose’s moments on stage were too brief but the transgression from innocent girl to vengeful Wicked Witch of the East, was shocking – her actions leading to the beginning of the story of the Wizard of Oz as we know it. For me, the only weak link in this superb cast was the eye candy factor in the form of Samuel Edwards as Fiyero, the love interest of both protagonists. His acting was superb, but his singing was simply overpowered by the clarity and intensity of the female leads – his tight breeches were a sure-fire win though!

This production was simply one of the best pieces of live theatre I have ever seen!

As mentioned above, the costumes, props, lighting and sound created an immense spectacle. Sitting near the front, I found myself absorbed in the powerful vitality of the live orchestra, the glamour and sparkle of the costumes, and the magnificence of the set. This show was all singing, all dancing, lights, music, and noise. Alongside this it was also immensely comical yet touching. The musical’s conclusion was simply not what I expected, adding an unfamiliar twist to the traditional Wizard of Oz story, and it left me feeling truly emotional.

Overall, this production was simply one of the best pieces of live theatre I have ever seen – everyone may say it, but it is undoubtedly true. This iconic story is renowned worldwide in its many incarnations, Wicked, in my eyes the most vivid and hard-hitting of them all. If you are a fan of musical theatre or despise it, there will be something in this production for you to enjoy.

Wicked is running at The Lowry Theatre until 25th July. For more information, see here.

Appointment of Pro-Vice-Chancellor for Research and Knowledge Exchange announced