Impact Sport spoke to Gafar Kuku, President of the University of Nottingham American Football Club about the sport’s popularity, social side and how you can get involved.

Hi Gafar. Football  rugby and hockey all seem to be much more common in schools and colleges, so not many people have probably played American football before university. How much experience do you need to take part?

Most of our team hadn’t played prior to coming to university, but this year we had our biggest intake of players who had played before (at local level or at another university). It’s a sport people can pick up quite easily with hard work and commitment from beginner level upwards. That’s the same across the three teams across our club – the contact team, the women’s flag football team and the women’s contact team.

I was ambushed at the fresher’s fair by someone (that I now play alongside) on my way to the boxing stand with no prior experience and here I am just over two years later, a first string player and president of the club. Like with most sports and competition at such a high level, you need to be both mentally and physically strong.

With this in mind, is it a popular sport?

American Football has definitely taken off the past few years in the UK. The Wembley games and NFL Weekends in London, the BBC’s new contract to show games and highlights have all added to the popularity. American Football became a BUCS sport in 2012 and since then most universities around the country have entered to compete in leagues across the year. It’s really nice to see.

How expensive is it to be a regular member?

Our costs cover our specialized kit that members hire (helmet, shoulder pads, lower pads, training jerseys and game day jerseys). There is also club membership, and a pre-season training camp weekend fee. Combined with the UoN Sports Membership the uni require everyone to have, it comes to exactly £300 for the year.

The coaching staff are fantastic. We have eight coaches in total, one for each of the positional groups (Corners, Safeties, Linebackers, Defensive Line, Wide Receivers, H Backs, Running Backs, Offensive Line, and Quarterbacks). All of them have previous experience playing. If I had to estimate I would say we had just over seventy years experience between the coaches three of which are former players here at Nottingham.

One of our coaches was the Captain and Quarterback for Swansea University. Our Head Coach has also coached in America at Adrian College and East Stroudsburg College. They really do work with us to make us better and finesse our techniques – making massive gains in our development. 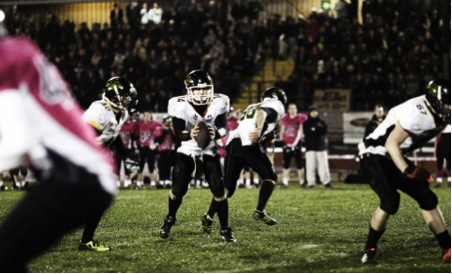 What is the social side of the club like?

We have an amazing social sec this year – Carl Pickering – who is simply the man in charge of all things fun. We have Wednesday night socials in Crisis every other week, sometimes joint with women’s teams like Lacrosse. Most of them are fancy dress which definitely makes us identifiable.

We’re all about enjoying ourselves, whether we’re in BCL screaming ‘Jumpman Jumpman Woo’ or in the main room dancing to Taylor Swift. The women’s teams do team breakfast at our women’s social sec Sarah Robert’s house before Saturday morning training.

On Sunday nights we gather at The Ropewalk to watch games and highlights that anybody is welcome to join. We’ve also started doing socials on Friday’s at Stealth to vary the nights our members like to enjoy and we have a Christmas and End of Season dinner each year.

This year we’re excited it will be taking place at our sponsor venue, Alea Casino.

What would you say is the best thing about being part of the club is?

We train twice a week and play games on weekends during the regular season so that’s a lot of time spent around the same group of people. I can honestly say I’ve met some people I know I will be friends with years from now.

The club is incredibly inclusive across our three teams and from day one you feel like family.

I’ve learnt about teamwork, communication and leadership and making it count for something in both on and off the field. There’s lot of impact and big hits in the game that are fun to watch as well as deliver to the opposition.

What should we look out for this year?

Definitely our home games on Uni Park 3G. We’re opening our season in a special way this year. For the first time ever we face Trent on University Park this Saturday at 7.00pm under the lights.

Our Super Bowl Party will take place in town on Sunday February 7th 2016 so be there or be square. Its always so much fun and we can’t wait to release the details about it so keep it locked on our social media platforms. The Women’s Flag Team is hosting one of the four Opal Series Tournaments on Jubilee Campus 3G on 21st November 2014. 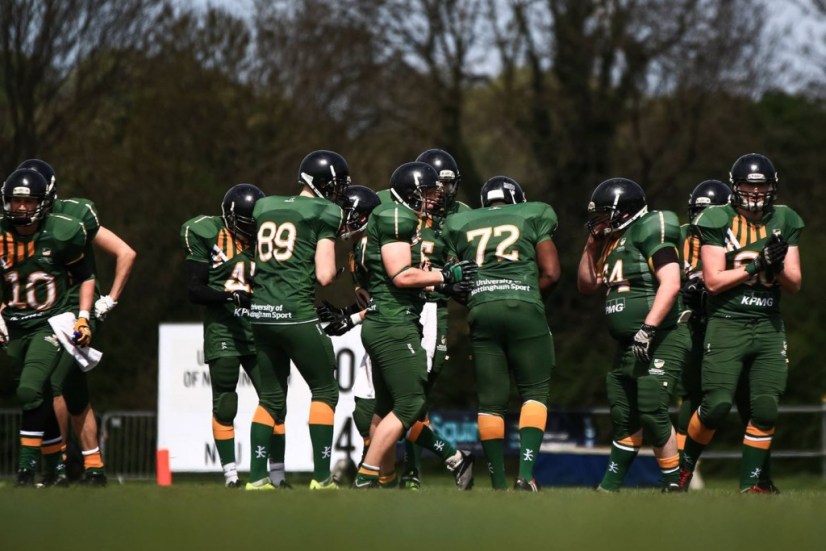 Who should we look out for this year?

Our lineman on both sides of the ball are looking strong and work a lot on technique so I’m excited to see how our oppositions rise to that challenge. Alex Boz (safety), Tom Morris (wide reciever), Josh Berry (linebacker) and Sam Wright (quarterback) are not messing around this year. These guys have shown some impressive skill in our preseason so they’re ones to watch.

It’s the same with running backs Chris Morris and Jon Nutt. We’re also excited to have welcomed two scholars this year: Will Hobbs (running back, Team GB) and Nathan Hamer (running back, Hampden-Sydney College in Virginia).

“We’re opening our season in a special way this year. For the first time ever we face Trent on University Park this Saturday at 7.00pm under the lights”

How can UoN students get involved?

Make you like our Facebook page for all of our info as that’s where we’ll be posting details about our fixtures for people to come down and support. We recruit throughout the year so anyone who thinks they’d like to try it, come and join us at 7.00pm Tuesdays and Thursday in A48 for our team meeting, followed by a training session (so bring boots suitable for 3G). We also have volunteering opportunities for our field management and  video analysis team so even if you don’t want to play you can still part of our community!

Be sure to take a look at the University of Nottingham American Football page on Facebook: https://www.facebook.com/UoNAF/?fref=ts

UoNAF kick off their season this Saturday at 7:00PM (14th November) against Trent university on the Uni Park 3G.