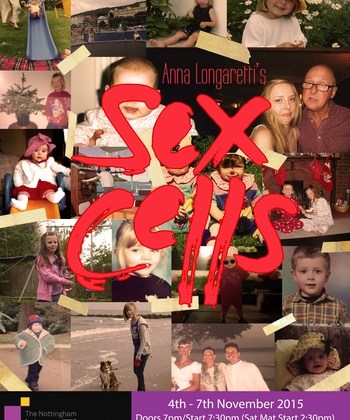 As shown in the set itself, the details of their occupation are hardly noticeable (with a few memorable clues peeking behind monitors or out of boxes here and there) and scarcely important. The story takes characters in a very specific occupation to tell a more universal and deeply affecting story not about sex, but what would come next: the joys and aches and pains of being a Mum.

This is a modern depiction of motherhood that isn’t afraid of showing that it’s an experience of both jubilation and desperate sadness that is different for all; it never offers anything as trite as explaining that children are the best thing to happen to anyone. There is real pathos especially in the quiet grieving of Lilian, played by Libby Boyd, an older mother with a loveless marriage and a son long flown the nest but equally so for the youngest Sylvie who desperately wants to be a mother but faces the prospect of adoption and the fears and insecurities she still carries. Despite a slightly shaky French accent, Bethany Almes is otherwise immediately affecting as Sylvie and heart-breaking in a superbly delivered confrontation with Lilian where we suddenly see right inside both women and understand everything there is to know. This is a masterfully staged moment and Boyd’s wordless reaction is devastating.

The whole cast know how good Anna Longaretti’s dialogue is and don’t waste a single line; it would probably be worth seeing twice just to try and hear the jokes you missed the first time. Sophie Walton has great comic timing as the vapid but endlessly endearing Essex girl Tiffany that recalls Catherine Tate’s creations; her bleary eyed stagger into the office one particular morning wrapped in the misery of a hangover is a particular highlight among many. Charlotte Kirkman is equally strong as a mum of five struggling to balance her roles both in and out the office and expertly balances hilarity and poignancy in moments where we sense a wistful yearning for pre-family life. Meanwhile shuffling cheerfully through the background in his cardigan or tapping away in the corner is their gentle and thoroughly useless superior Mr Causeway. Joe Caunce is so good here it’s easy to take his presence for granted and scene by scene effortlessly charmed the entire audience’s socks off.

I understand much grief was spent over construction of the set, and although it’s obvious immediately why it proved such an undertaking, it has been faultlessly executed, and is rich in its detail. Also deserving of mention is Eden Phillips Harrington’s costume design that wordlessly indicates so much about the ages and personalities of every character from the first scenes.

There came a point where I gave up trying to make mental notes on the performance just and let the story wrap around me like a hug. There are admittedly a few missteps (some lengthy musical black outs that stall the otherwise brisk pace and some problematic blocking now and then) but for a first time directing debut it’s a very impressive achievement for Will Berrington and his producer Anna Scholes. Overall, it remains enormously hard to sustain much dissatisfaction towards Sex Cells as a production.

As Sex Cells drew to a close it felt like watching the end of a wonderful old sitcom. I could have happily spent another 10 hours in this office with these characters. This is a terrifically entertaining and touching production, and few theatre going experiences can be as rewarding. Sitting in an audience united in laughter and delight towards the stage, the show also serves as an important reminder to give a great big hug of thanks to Mums everywhere.