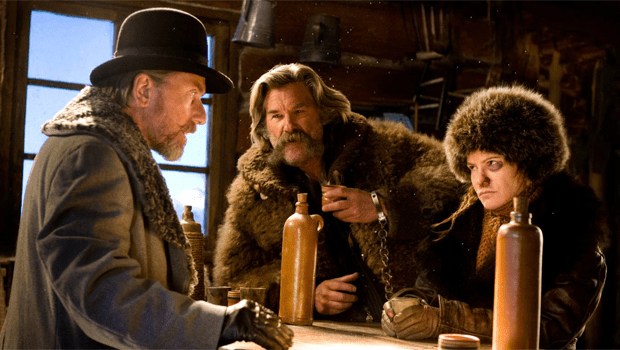 In my preview for this film I wrote that it could be another of Tarantino’s best works, however, by time of writing this review – I might need to revise that opinion. Without any spoilers, The Hateful Eight might actually be Tarantino’s best film ever, which truly entrenches him as one of the finest writer-directors, scratch that – filmmakers – of our generation.

For those of you who don’t know, the film follows eight hateful strangers, each trapped in a stagecoach stopover, Minnie’s Haberdashery, during a blizzard. Each stranger has stories to tell, only one of them isn’t who they say they are. The Hateful Eight has been described by many as having similarities to Tarantino’s first effort, Reservoir Dogs (1992), which is an opinion I would agree with. The most obvious similarity is that, unlike the masses of films that have been released in the interim between 1992 and 2015, it relies very little on big set pieces and loud explosions (*cough* Michael Bay). Nor does it rely on obnoxious music designed to increase tension. No, The Hateful Eight is a film designed to work within very enclosed spaces, relying heavily on the interactions of its diverse characters – to build tension and join the story together. 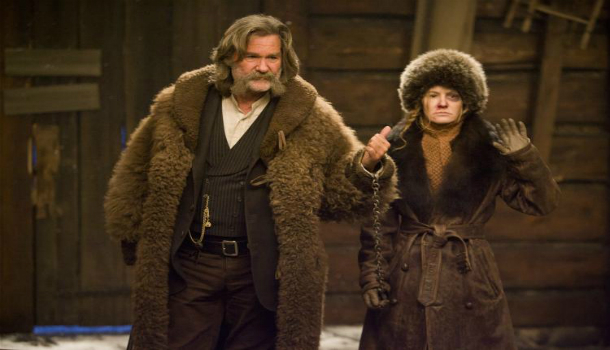 Regarding the use of enclosed spaces, this is reminiscent of a few of my favourite films — 12 Angry Men, Reservoir Dogs and Locke — specifically because it disregards the unwritten rule that a film must be expansive to incite excitement. No, this film very much encourages the opposite. I can only recall four different sets during the film, (the mountain, the carriage, Minnie’s Haberdashery, and Minnie’s barn), and the cinematography that fits the film’s various aspects within these four sets is precisely what makes it so great to watch.

The aforementioned aspects are split into six chapters, an interesting design choice from our filmmaker extraordinaire. In all six there is an underlying focus on character interactions to build the plot, and what’s more, all of these chapters – with their underlying focus – do a great job of showcasing the acting talents of the ensemble cast. Samuel L. Jackson was obviously the star – having received top billing within the film – but it would be an injustice to focus only on his work. 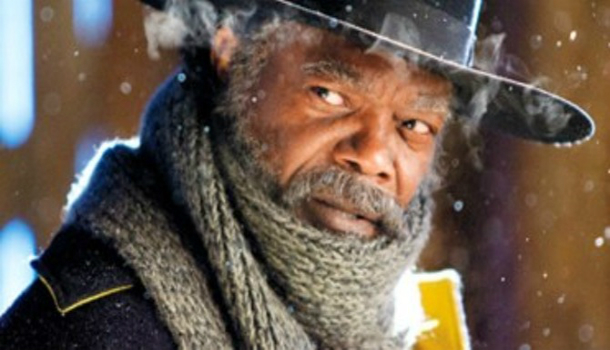 Just like every other Tarantino films, there is an ensemble cast that deserves equal credit. My particular favourites were Kurt Russell’s John Ruth and Walton Goggins’ Kurt Mannix. Kurt Russell does extremely well to bring a touch of Big Trouble in Little China into the mix, while Goggins’ performance has a remarkable streak of character development, which had me in tears of laughter numerous times. We should also recognise Jennifer Jason Leigh’s wonderful performance as the diabolical Daisy Donaghue, which rightfully earned her a nomination for Best Supporting Actress in the upcoming Academy Awards.

For all of you who may be fearful – fear not – because The Hateful Eight, holds on to everything we know and love about Quentin Tarantino’s films. There are some controversies within the film – such as Tarantino’s desire to be authentic to the time period, which involves unscrupulous amounts of racist dialogue – that I elect not to comment on. Whether or not Tarantino could make the film as good as without it is not for me to decide. Regardless, 2016 has just started and already we have seen one of the best films of the year, one which I would encourage you all to watch. In fact I might go ahead and book a second showing!

The Verdict
Outrageous violence, ridiculous moments of laughter, and a great way to spend two and a half hours of your time.

Images from ‘The Hateful Eight’, The Weinstein Company.