Trumbo tells the tale of Dalton Trumbo: acclaimed screenwriter of The Brave One, Spartacus and Roman Holiday, who was blacklisted and imprisoned in the United States in 1947 for his affiliation with the Communist Party at the height of the Red Scare in America. As with Spike Lee’s Malcolm X, it’s a film which sees director Jay Roach of Austin Powers and Meet The Focker’s fame taking a political, biographical left turn in his filmography.

Truly, the film is a spotlight on Bryan Cranston. After his leading turn in Breaking Bad, one of the most acclaimed projects of the twenty-first century so far, all eyes were on him for his first major screen role, and it comes in Trumbo. Once again, Cranston affirms why he’s one of the greatest acting talents to surface in his generation: just as the Hal of Malcolm in the Middle disappeared into the conflicted evil of Walter White, so too does the drug lord disappear within seconds of screen time as Cranston disappears into his depiction of Dalton. It’s a less challenging role than White, although footage of the real man in the credits makes apparent the preciseness of his performance, played with authoritative intellectualism, with fleeting moments of anger and vulnerability.

Unlike biopic Suffragette of 2015, which got much promotional millage out of a one-scene appearance from Meryl Streep, Trumbo actually downplayed an all-star cast featuring the likes of Elle Fanning, Helen Mirren and John Goodman, with whom Cranston previously appeared with in Argo. A surprisingly sizeable appearance comes from writer, stand-up comedian, director and producer Louis CK as Dalton’s fictional ally Arlen Hird. Not often noted for his acting, the comedian actually brings a great pathos and levity to the role (and for TV fans: seeing the leads of the incredible Breaking Bad and Louie is something of a thrill). Unfortunately the other kin Trumbo shares with Suffragette is a fairly by-the-numbers approach to the tale at hand. 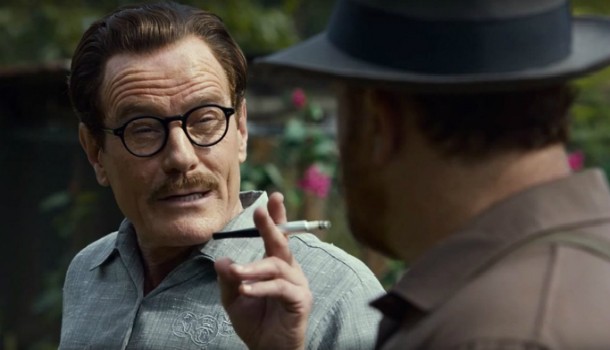 Trumbo depicts an undeniably enthralling narrative, which never bores across a two hours run time: but it can occasionally feel like, beside some stellar performances, it is riding a little on a story that’s inherently interesting, rather than the direction doing much to enrich the narrative with too many artistic flourishes. Though far from a comedy, there is a perplexing sense of levity running through the film which does somewhat hint towards the roots of its director. The cinematography is often beautiful, the opening shot and ensuing countryside scenery being especially striking, but it does often feel like a fascinating story was put to film, and little more. There are moments in the movie where little major plot points came and went with little emotional resonance, because it feels like Roach assumed that just because something was sad when it happened in real life, it would be when he laid it on screen too.

The script too lacks a little weight. Though filled with peppy dialogue and strong characterisation, unlike last year’s Selma, Trumbo chooses character drama over political bite. Both Selma and Tangerine both seemed to have capitalised on the civil rights movements so prevalent in the year of their release: Trumbo is equally opportune given the rise of the left and far right in politics on both sides of the Atlantic in the past few years, but fails to capitalise on the exploration of such ideologies to any degree. Indeed Dalton’s communist beliefs are explained to his daughter as a simple matter of sharing, and the topic is pretty much put to bed: it’s both a political simplification, and one that stands testament to how deep the film wanted to explore it, alongside the dichotomy of a man convicted for his communistic leanings, while living a life of luxury.

An entertaining and thought provoking film – with excellent lead performances, that could have used a little more inspiration in its execution.

Best Dressed at the Grammy Awards