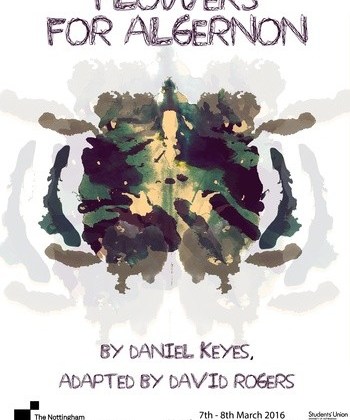 Entering the circular space, the audience were at once aware of and mesmerised by the breaking of the fourth wall. As the actors blended with the standing audience, we were all transported on the humorous, emotive and thought-provoking journey of Charlie Gordon, as he undergoes experimental brain surgery only previously tested on mice such as Algernon.

Based on the short story by Daniel Keyes, the story begins with Charlie (Miguel Barnilas) being brought in for brain surgery, part of an experimental procedure to increase his mental capacity from an IQ of 60 to expected genius levels. He is recommended for the procedure by his teacher, Miss Alice Kinnean (Alice Simmons). This is the first time the audience hear about Algernon, the genius white mouse, and the only prior ‘successful’ subject of the work of Professor Nemur (Ben Dillon) and Professor Strauss (Robert Goodhall).

After the surgery, Charlie documents his progress and from his own perspective and that of the lab workers, the audience sees him become more and more intelligent. Humorous as the performance is, the unintentional wit and naivety from Charlie gaining many laughs from the audience, once he develops his intellect he becomes aware of himself and humanity as a whole. Over the course of the play, he becomes more and more agitated and transitions from viewing people as initially friendly to hostile and passively aggressive; thus begins his isolation.

Charlie continues his journey of self-awareness, yelling at Alice that he is “not just something in a test-tube”. The closest emotional relationship he develops throughout the play becomes that to Algernon, as they share the experiences of becoming objectified by the scientists and used for their intellect. Towards the end of the play, Algernon suffers more and more, to which the doctor’s responses are cold. Charlie reacts angrily to their passivity, realising the ironic and inconceivable truth that he was in fact happier in his ‘retarded’ state rather than as a ‘genius’, because as an ‘idiot’ he was at least treated like a human and cared about, rather than being totally alone and dissatisfied. At the end, Charlie regresses to his original mental state, which is clearly demonstrated in his return to his original clothing and mannerisms (nervously fiddling with his jumper and muttering).

Many members of the audience burst into tears at the conclusion of the production, and the uproar of applause from a no more than twenty-person audience is testimony to the inspirational nature of the performance. Lighting was used incredibly effectively throughout the play to guide the attention of the audience from each area in the circular performance space, and music was further included to represent several months passing as Charlie’s IQ increased and finally peaked.

“This performance was hugely impressive with some incredible acting, in particular from Miguel Barnilas (Charlie Gordon)”

The only possible criticism one could give this production of ‘Flowers for Algernon’, is that some major plot points relating to the role of Charlie’s mother and the Warren State home were left unanswered. However, it is purely a compliment to the performance that the audience left with questions and a desire to learn more about the characters and the plot line.

To summarise, this performance was hugely impressive with some incredible acting, in particular from Miguel Barnilas (Charlie Gordon) who created the perfect rapport with the audience members and carried the emotional power of the entire performance.

Flowers for Algernon is running at the Nottingham New Theatre until Tuesday 8th March. For for information see here.