Claire Boucher, AKA Grimes, is an artist who attracts a particular type of crowd. They’re not cool, nor are they trying to be – they’re not averse to cheese, in fact they lap it up in spades, and most of all they’re out to have fun, and lots of it. Grimes may not be for everyone, but the people who connect with her blindingly bright pop music, and the idea of letting loose and being free, came to Rock City in droves.

The night kicked off, and was enhanced the whole night through, by the presence of HANA. Commanding the stage not like someone who was yet to break out, and more like a woman expressly about to do so: her performance was equal parts enthralling and ethereal. With the support of Grimes, Lorde and Lana Del Rey, three of the biggest names in alternative pop music, she has every right to be confident too. Real name Hana Pestle – she once made acoustic music covering the likes of Leonard Cohen, but in 2013 she ditched that idea, got a new image, learnt music production, and emerged as an entirely different, and more original, new artist. Flanked by a simple but highly effective stage set up featuring a couple of paper parasols illuminated by ever-changing lights, the purple glow in which she proceeded was the perfect setting for her music: modulated with much of the same gear Claire used on her first records, but taking a more subtle, and mystic approach. The crowd might not have known her songs, but I have a feeling that soon we all might. 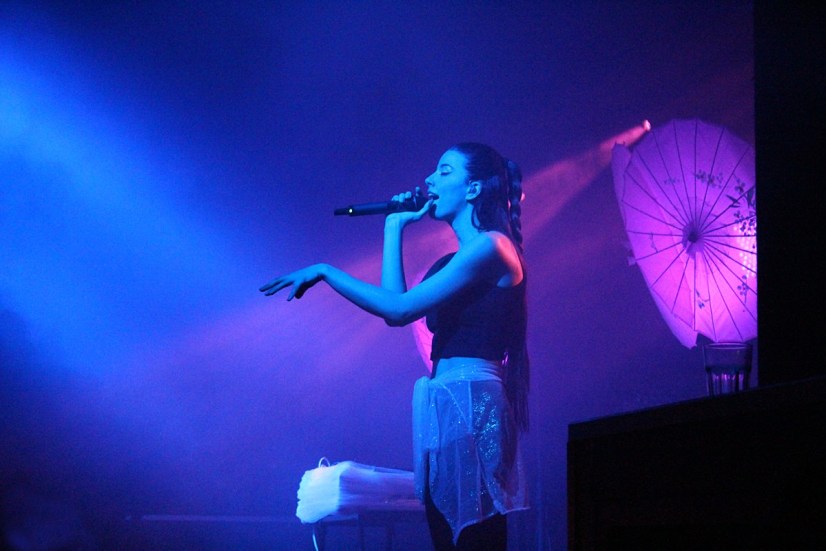 Personally, I felt like a misfit in a crowd full of hardcore Grimes fans. You could tell them a mile off: “Art Angels” scrawled on denim jackets, leggings adorned with a kaleidoscope of colour, of all sizes great and small. I, on the other hand, have always had a cautious relationship with the singer. I liked a lot of stuff on her breakout record Visions but some was deeply forgettable, and Art Angels was an album I loved in places, and felt tried too hard to be weird in others. But I came that night because I knew, from the uptempo nature of almost every song she’s ever produced, from the effort she puts into her music videos and packaging, that she was going to put on one hell of a show… And boy did she deliver.

The set began with her tiny backing dancer Alyson Van curving to the slow symphony of ‘Laughing and Not Being Normal’ – until the start of ‘Genesis’ when Grimes erupted onto the stage and all hell broke loose. The crowd went absolutely insane, and Claire, smaller than expected and dressed in an amazing Moschino dress made out to look like a pack of detergent with chemical ingredients on the back, stormed around the stage. Flitting between live-mixing the instrumentals and being front and centre between her two backing dancers, she was a hungry and energetic presence. Indeed ‘Flesh Without Blood’, a song I don’t much care for on the album, proved my theory – and was a tonne of fun in the live setting. The climax of the song, which saw the lights down low and Claire on her knees screaming into a mic as if this were the kind of Norwegian metal set Rock City often played host to, proved her height and oft introverted demeanour wouldn’t hold back the force of her expression.

The stage set up really was a flurry of activity. There were two backing dancers, HANA often making it a three, and intermittently picking up guitar duties – and the lighting was pitch perfect: a rainbow array that would only be appropriate in a seventies nightclub, or a Grimes show. At other times the dancers had lasers shooting out of their fingers and lassos of fabric to dance around. Grimes paced through a rendition of ‘Scream’ where she rapped in Russian, with ‘Venus Fly’ and the divisive EDM single ‘Go’ going down without complaint: the whole crowd beaming ear to ear. “Normally I’d tell you to dance, but that’s not a problem with you guys” Claire proclaimed at one point. She was spot on, but it’s honestly hard to imagine a crowd standing stone faced and motionless to a set like this one.

A personal highlight was ‘World Princess Part II’, which Nottingham was lucky to see considering it was their first live performance of the track. Claire predicted beforehand that she’d forget the words, and proved herself right, but the energy of the lead melody was just the right balance of cheese and pop appeal to set to get things off right. The tracks that went over less well were the slower and older cuts: few seemed to know ‘Symphonia IX’ and even a new version of ‘Be A Body’ couldn’t stop it from being something of a lull: but honestly, the crowd appreciated a breather. The night came to a close with what was once her flagship song, and the Art Angels cut which has emerged as her new one. ‘Oblivion’ remains her most emotive track to date, and the gentle, offset rhythm of the synths evoked more of a gentle sway than a full on mosh. Quite right too, because Claire’s passionate delivery deserved all the attention it got. She eschewed the tedious encore ritual by announcing that ‘Kill V. Maim’ was going to be her actual final song: and it couldn’t have been anything else. It’s hard to describe it as anything other than “a banger” – and the dancers and Claire threw everything they had at it, making an amazing finale.

There are some sets which are just going to satisfy the fans, and indeed it seems Grimes attracts only the most hardcore of them when she performs: which is a shame because this wasn’t one of those sets. This was one to win over your critics. It’s hard to imagine attending this show and not having a blast: and it proves that Grimes on record is only half the story. With her dancers of unstereotypical sizes and ethnicities, with music covering several continents of culture all in one orgasm of sound and colour: her set at Rock City was a celebration of everything she stands for – diversity, energy, and not giving a shit what anybody else thinks.

A life of adversity: A Look at Jamie Brewer