Book of the Month: April 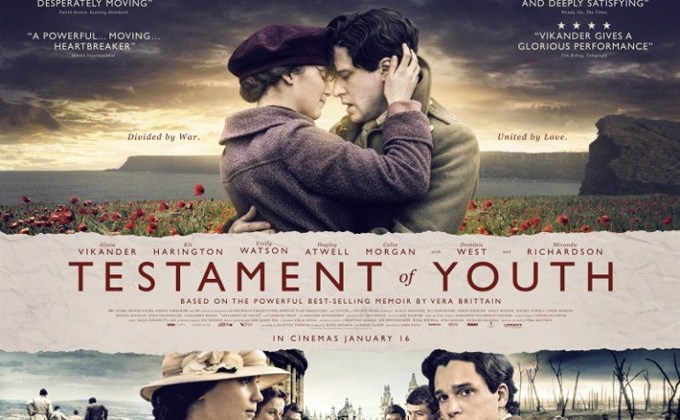 ‘Mother says that people like me just become intellectual old maids,’ I told him.
‘I don’t see why,’ he protested.
‘Oh, well, it’s probably true!’ I said, rather sharply, for misery had as usual made me irritable. ‘After the War there’ll be no one for me to marry.’
‘Not even me?’ he asked very softly.

At over 650 pages, this book isn’t one for the faint hearted. Combined with the fact that it is incredibly emotional and romantic it should only be attempted with a supply of tissues and a tub of ice-cream in close proximity. Despite the fact that it took me a while to get through, due to being an English student and therefore not having much time for reading off syllabus, I really struggled to put Testament of Youth down. I even chose it over Netflix most nights. It often had me up in the early hours reading, when I know I ought to have been asleep, or reading that week’s text.  It really is that good!

The quote above sums up the general vibe of the piece: one of tender romance between lovers, but also a brave challenge to society’s outdated view. In this case, particularly towards women and education. The events recall an autobiographical first-hand account of World War One, which maps out the life of its author Vera Brittain, initially documenting her struggle to get accepted into the male-dominated Oxford University. Having defied all expectations by gaining admission, her triumph was then cut short when war broke out, and she realised her purpose was for something far greater than a university degree. She decided she could not just sit by idly studying when her lover, Rowland, and brother, Edward, were fighting in the war.

Thus she began her career as an army nurse, in order to play her part towards the war effort. Her budding romance with Rowland is made uncertain due to the complications of war, and is sadly cut short when tragedy strikes, tearing both her brother and Rowland from her life. The rest of the book details her struggle to adapt to a life post-war with the loss of her fiancé, where she debates whether she can return to Oxford and her previous life, both of which now seem to be impossibly and permanently changed.

Anyone who is a fan of romances and the classic love story will love this book. Perfect for budding feminists as Vera’s dry, critical sense of humour and progressive way of thinking challenge the patriarchal values heavily present in the early twentieth century. For any ardent war time story lover, there are also film adaptations if the book just isn’t enough. Good luck with this epic length piece that is guaranteed to tug at the heart strings and will most likely reduce you to tears – just remember to stock up on the ice-cream first!

“Everyone has a chance to play in the game”: Women’s Rugby Union Varsity Interview