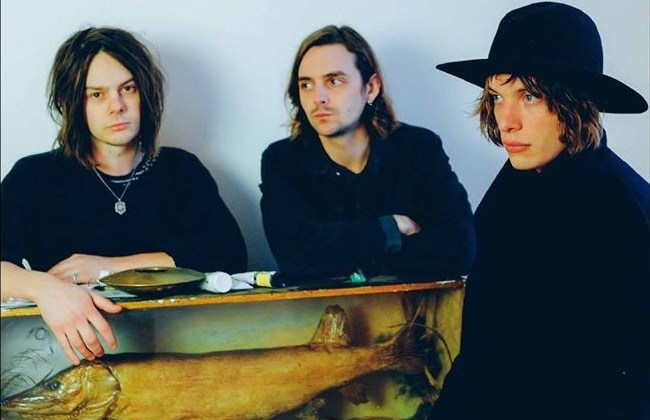 Yak have an incredible talent, a raw edge which is both intriguing and different. With their debut album due to be released in May, there is no better time to discover the crazy, vigorous sound of the London based band. Fronted by Oli Burslem, the band were formed in a relatively idyllic London based lifestyle. Far from the average youngster in the city, Burslem was used to pumping into rock stars such as Thurston Moore and Jason Pierce at his Spitalfields Market stall in East London. Bassist Andy Jones and New Zealander Elliot Rawson make up the rest of the line up.

“Watching them live gives me that feeling you get watching scratchy early footage of Nirvana.”

Despite already having a ferocious reputation, the band hit the ground running back in 2014 with the release of Hungry Heart. It encapsulates the direct style of Yak’s sound, an enigmatic collection of effect-ridden guitar riffs, lyrics and drum beats. This was followed by their second EP Plastic People. It still generates a similar noise to their debut release, though songs such as ‘Smile’ and ‘Distortion’ hint at a more gentle eclecticism.

After developing a following in America, they caught the eyes of Jack White’s label, Third Man Records. Their first release under the lead singer of the White Stripes was No EP, an edgy amalgamation of frenzied guitar riffs and repetitive cries. The collection of tracks were met with much critical acclaim, NME even gave it a rating of 4/5. Such support has been echoed by fellow musicians including Peace’s Harry Koisser. He told Clash Magazine that they are “sexy and dangerous and so, so loud. Watching them live gives me that feeling you get watching scratchy early footage of Nirvana.”

But it really is playing live, where Yak really flourish, producing a raw energy unlike no other. Over the past few years they have supported bands such as Peace, Palma Violets and The Last Shadow Puppets, whilst also filling intimate venues of their own. What is apparent is their desire to leave a lasting impression upon the audience: Burslem adopts a far different persona on stage. He has an expression of rage and intensity which makes songs seem more powerful than their studio versions. More often than not the stage along with their gear would be left destroyed at the end of the gig as a result of pure energy. With a live sound like theirs it is no surprise that the band have such a large following forged from various appearances supporting other established acts.

2016 is bound to be a big year for Yak. Their debut album Alas Salvation is due for release in May and already they have announced a UK headline tour, with more dates to follow. Having only been an outfit for two years one has to wonder whether an album is arriving too soon, with it being a common trend in the music industry for new bands to take up to seven years before releasing a full length EP. However, Yak cannot be defined within the norm; their quick rise out of nothingness suggests the world beating potential of the chaotic group.

With fast paced, intriguing songs it is impossible to ignore the limitless potential of Burslem, Jones and Rawson. In a world where differentiation and rawness is limited in rock music, Yak have the ability to become the saviours of an industry which is slowly losing its heart.