Is There a Point to Holocaust Dramas in 2016?

Liam Inscoe-Jones and Beth Rowland discuss the place of Holocaust dramas in modern society and cinema, and whether the lessons of history can still be borne through an entertainment form.

Son Of Saul is a 2015 Grand-Prix winning Holocaust drama from director László Nemes. It is one of most shocking portrayals of the Holocaust in cinema, perhaps topping Ellen Klimov’s 1985 Soviet-occupation drama Come and See. It follows the titular Hungarian, an appointed Sonderkommando: a rank given to select Nazi death camp prisoners tasked with executing their fellow Jews in the gas chambers.

A very moral handling of the subject matter, it was photographed ingeniously by Mátyás Erdély, who shot the piece with lead Géza Röhrig in tight focus so that many of the horrors are obscured. Still, I was shocked by the extent to which it showed the piled naked bodies in the wake of gas chamber poisonings and the assassination of Jews on the brink of death pits.

“there is a feeling of widening your emotional intelligence, through a fractional experience of something you hope to never experience yourself”

The film is nihilistic and shocking, and it was the first I’ve seen in a long time bereft of people chomping on popcorn throughout. After the credits rolled people filed out in solemn silence. Describing it to friends afterwards, some simply couldn’t understand why I’d pay money to see such a thing. I couldn’t understand why they wouldn’t.

It would be ridiculous to say I enjoyed the emotional onslaught of Son Of Saul, or that even that I “liked” the film: but it’s still one of my favourite releases of the year. I cannot explain the phenomenon besides comparing it to the effect of choosing to listen to an expressly sad album such as Sun Kil Moon’s Benji.

It’s hard to place why you’d do it to yourself: but there is a feeling of widening your emotional intelligence, through a fractional experience of something you hope to never experience yourself. But it’s historical and culture significance is easier to determine, and far better enunciated through the words of Elie Weisel.

He is the Nobel Peace Prize winning Holocaust survivor who wrote Night, a slim memoir of his time in the Auschwitz death camp which has since been translated into 30 different languages. Oprah Winfrey called the novel “required reading for all humanity”.

On this subject, Weisel writes that “for the survivor who chooses to testify, it is clear: his duty is to bear witness for the dead and for the living. He has no right to deprive future generation of a past that belongs to our collective memory. To forget would be not only dangerous but offensive; to forget the dead would be akin to killing them a second time”. 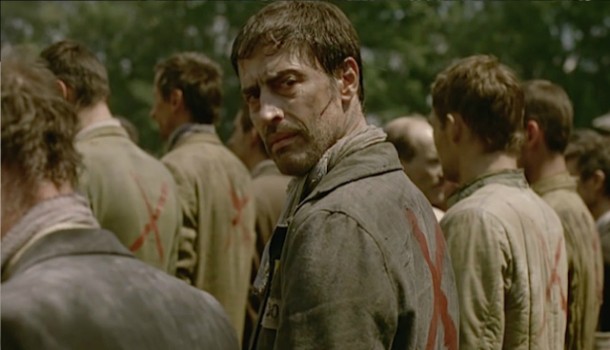 Historically, Son of Saul adds little new information to the collective knowledge of the Holocaust, it is a retelling: that’s exactly its point and import. Released in England in the same fortnight where Donald Trump has secured the Republican nomination through racially-divisive rhetoric, and the far-right Freedom Party came second in the presidential election in Austria, the very country where many of these death camps existed.

It is fundamental that pieces of art continue to retell the stories of the most extreme consequence of the determination that any human is in any way born superior to another, and that we all continue to see and endure their horror.

I knew nothing about Son of Saul before I sat down to watch it. I hadn’t seen the trailer, read any reviews, or researched it at all. I only knew one thing: it was about the Holocaust. Instantly, I was nervous; I’m a rom-com kind of girl, I flinch at any violence and cry at anything remotely emotional. But I suppose if you make your boyfriend sit through About Time when it’s your choice of film, then you must too sit through whatever his choice is.

However, I found Son of Saul fundamentally problematic. Essentially, the issue is this: I watch films as entertainment, and this harrowing, disturbing, and frankly hard to watch film did not entertain me in any way.

The film follows one Jew, forced to usher fellow captives into the gas chambers, rifle through their belongings and then remove and dispose of their bodies. It is perhaps the worst job in the concentration camp, and I struggled to watch as the naked bodies of the dead were piled on top of each other, thrown into furnaces, the blood scrubbed away by fellow Jews.

The film was the most shocking I have ever seen, and I felt trapped in the brutality of it all. I had to avert my eyes on many occasions: I just couldn’t watch the frail, elderly Jewish rabbi shot in the head and fall into a burning pit of bodies while his wife waited her turn.

That is not to say that films about horrible events like the Holocaust are not important, or should not be made. An essential facet of filmmaking is to educate and inform, and the Holocaust must never be forgotten, but represented for every generation, in order for our children and grandchildren to learn from the mistakes of the past.

However, those who need to learn from the Holocaust were not sat in the cinema watching the film. Those preaching far right or racist beliefs are not accessed by a small-time foreign film, and for that reason the film serves little educational purpose. Instead, it shocks those who already know how horrific the Holocaust.

Worse still, Son of Saul draws no connecting line between the dangers of far right or racist beliefs: it merely shows the most extreme result. It is therefore no warning or lesson, merely a horrific retelling of an event that is perhaps one of the most uncomfortable in the whole of human history.

For those who, like me, have already visited Holocaust museums, been stunned into silence and shed tears over the tragic loss of life, the film was a kick in the face. I had to turn my face away: not because I am not offended and horrified by the Holocaust, but because it hurts me to watch even a retelling of the events that really killed millions of innocent people. And for those who need to see the film, and learn from the Nazi horrors: sadly, they weren’t watching.

Safety and Responsibility: Why Universities Should Provide Drug testing