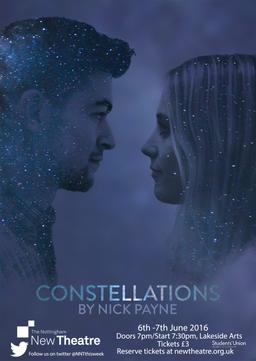 Constellations, written by Nick Payne, is a play that questions concepts of fate and free will, whilst demonstrating the inevitable complexities that come along with any romantic relationship. This is paired with the dramatization of the ‘Quantum Universe’ theory, giving the play an added depth of meaning.

As I researched the play beforehand, I was intrigued to see how the director, Gus Herbert, producer, Matt Standen, and cast members would educate the audience about such a complex theory, so I waited in anticipation.

Both Marianne (played by Sophie Walton) and Roland (played by Ben Standish) exceeded my expectations and captivated the audience from beginning to end. They conveyed a vast array of emotions throughout the performance, a credit to the evidently detailed, meticulous directorial decision-making, and succeeded in encouraging a range of emotions from the audience.

The play takes the audience through the lives of Marianne and Roland, from their first meeting, through their ups and downs as a couple, and then finally on to when Marianne becomes terminally ill.

When this scene was first performed, Marianne tells Roland that her cancer is only at Grade 1, and that she has a very high chance of full recovery; although she has difficulty speaking, she is still able to communicate with her voice.

”The contrast between these two scenes, Marianne and Roland’s hope contrasted with their despair, ultimately encouraged one of the most touching moments in the play”

The scene is then re-enacted later in the play, when Walton and Standish utilised sign language as their main form of communication. This was a highly poignant moment for Walton and Standish, as they both rely on facial expressions and body language as a means to convey their desperation and heartache over the severity of Marianne’s cancer, now at Grade 4.

The contrast between these two scenes, with Marianne and Roland’s hope contrasted with their despair, ultimately encouraged one of the most touching moments in the play. Walton’s greatest triumph was the extent to which she engrossed the audience, as it sat in complete silence and awe of her emotion at this point.

“Do we choose our own ending, or is it pre-determined by the universe?”

The actors’ onstage chemistry was beautifully natural and endearing. As they commenced the play, Walton and Standish constantly diverted their eye contact between the floor and each other, which instantly sparked the audience’s attention and allowed them to observe the immediate romantic tension between the couple.

Standish succeeded in encompassing contrasting figures, for example, he would perform one scene as a weaker character, whereas in the next, he would adopt a superior role.

Impressively, this encouraged the audience to recall the main message of the play: Do we choose our own ending, or is it pre-determined by the universe? As actors, the duo worked incredibly well together as their performances were mesmerizingly slick and in sync with each other.

Undoubtedly, the style of play is confusing, since scenes are repeated multiple times with only slight differences in order to present different outcomes. However, the storyline is simplistic, which was reflected in the set design of the production, as well as the minimalistic staging, and rare use of props.

The two actors used the entire stage to communicate clearly, which was aided by effective lighting and music in order to underpin a scene change.

‘‘The script, which is wonderfully romantic in its nature, as well as realistic in regards to the relationship between the couple, allowed a combination of wit and angst throughout the performance’’

Despite the repetition of scenes, the audience were constantly wondering what would happen next as each scene juxtaposed the next. The script, which is wonderfully romantic in its nature, as well as realistic in regards to the relationship between the couple, allowed a combination of wit and angst throughout the performance.

The audience were enthralled by the relationship between the couple, as Walton and Standish demonstrated a diversity of feelings.

Admittedly, there were a few disjointed moments within the production, for example towards the start of the performance when the actors re-started scenes, and Walton and Standish stood at opposite sides of the stage, or took long pauses. Personally, I felt unsure on whether this was meant to happen or whether they had just forgotten a line, which was slightly jarring and uncomfortable.

However, as the play progressed, it became clear that these pauses were deliberate in Herbert’s choice of direction as he aimed to create a clear differentiation between each scene, offering moments for the audience to reflect.

Towards the end of the play, Walton and Standish performed the scenes so seamlessly and naturally that I became completely unaware of the changing of scenes. As the audience accepted the style of the play, it allowed them to focus upon the comedic moments, as well as the incredibly touching ones.

Hebert’s production challenged the audience’s perceptions and expectations of romance, passion and love, alongside the metaphysical, pre-determined elements of the universe.

Despite the turmoil that occurs, the play concludes on a happy note, at which point I feel both Walton and Standish succeeded in capturing the charm of the play. Touching, heart-warming and utterly wonderful, I would most definitely recommend watching this show.

‘Constellations’ is running at the Nottingham New Theatre until Tuesday 7th June. For more information and to book tickets click here.

EXCLUSIVE INTERVIEW WITH EDDIE IZZARD: “If you want to make anything different you have to be inside Europe”