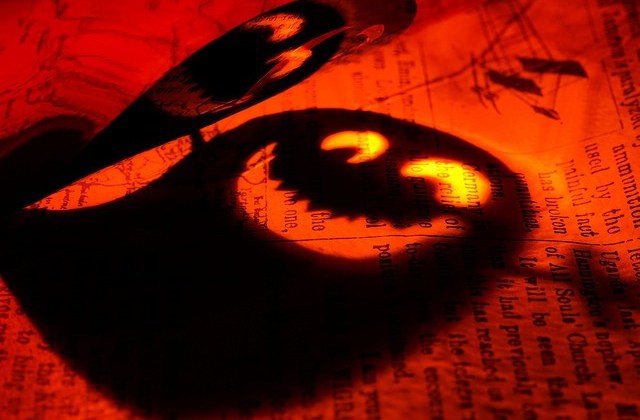 With Halloween fast approaching, Impact Arts brings you the five best arty Halloween costume ideas, for when going as a vampire or a zombie just won’t cut it.

First on this list; a little something for those who have grown tired of the usual superhero costumes, which have become increasingly popular with the rising success of Marvel and DC in cinemas. Alan Moore’s character is guaranteed to be recognised, gaining fame through the hacker group Anonymous, who wear his mask, and is the perfect alternative to the well-worn ‘hero’ trope.

The antihero/vigilante’s costume, itself based upon Guy Fawkes, has become globally recognised as a symbol of rebellion and revolution and this darker character is surely better suited to the traditional Halloween style. Also, it doesn’t hurt that the character ties into Bonfire Night, which will be just days away…

While many recognise the classic film that is Breakfast at Tiffany’s, made iconic by Audrey Hepburn, the fact that it is based on a book by Truman Capote is less well known. The character of Holly Golightly and the staple outfit of the floor length black dress and tiara has been well worn over the years, but there are many other outfits which could be worn on Halloween, inspired by Miss Golightly. For example, the tasselled earplugs, eyelash embroidered eye mask and white shirt dress is just one of many other options when dressing up as Hepburn’s portrayal of Capote’s main character.

#3 – Anyone OTHER than Alice: Alice’s Adventures in Wonderland

Tim Burton’s recent adaptation of Lewis Carroll’s work, Alice’s Adventures in Wonderland, have brought with them a new perspective on many of the characters within the books and various interesting costumes to choose from. The character of Alice is somewhat overdone, however, The Mad Hatter and The Red Queen are just a couple of the iconic characters which Burton has given new life.

While the fact that Alice has mostly remained true to Carroll’s vision in her style is admirable, this certainly provides less flair for a Halloween costume, with the other revamped characters proving to be a much more interesting choice for a costume.

While at first glance this could seem to be just another witch costume on Halloween, the character of Elphaba is so much more. Not just the Wicked Witch of the West seen in The Wizard of Oz, Wicked’s Elphaba is shown first to be a misfit, but later to be strong, independent and a rebel, fighting against society’s cruelty.

This costume is a great choice, even if just to have an excuse to belt out Defying Gravity at whatever Halloween party you’re attending…you could even convince a friend to be Glinda and make it a duo. Although a ‘witch’ costume, this is only for the truly committed, this is theatre’s answer to the fully body paint Avatar costume – go green instead and become Elphaba from Wicked…

Sweeny Todd provides another scary option for your Halloween outfit, the fact that it comes from an urban legend making it perfectly in-keeping with Halloween. This cult classic is perhaps less recognisable than others on this list, but perhaps also more original, this is also another opportunity for a duo outfit with the character of Mrs Lovett, the baker who cooks Sweeney Todd’s victims into pies.

In true Burtonesque fashion, this character is both frightening and stylish, with the monochrome costume featuring pinstripes and a waistcoat, although, if attending a party out and about, maybe leave the switchblade at home…