November 1998: The first Star Wars Episode I: The Phantom Menace trailer premieres in cinemas around the world. Expectations were high…oh, innocence is bliss. IMPACT Film & TV dare to imagine a Trailer Watch from yesteryear…

George Lucas’ stellar new trailer for Star Wars: The Phantom Menace showcases the thrilling, classic StarWars-esque action that the director is known for, while introducing political elements that are sure to expand on the rich lore of the world.

Safe to say, I am pumped for this movie, and so seem a lot of other people. The above video was taken by someone at my screening yesterday night, after the trailer debuted while I was about to watch Meet Joe Black (a very mediocre film if I’m being honest the highlight of my evening was the trailer without a doubt).

I stuck it out to see the movie I paid to watch, yet many in the audience stood up after the trailer played, only to return after the Brad Pitt film finished. To my surprise, The Phantom Menace trailer played again, and the staff let the aforementioned audience members back in with their ticket stubs.

“It seems like the director is trying to make us have empathy for young Darth Vader, one of the most terrifying villains to ever hit movie screens”

As you can see from the video, the response was massive, and who can blame us? As soon as the Lucasfilm logo popped up, after hearing the news that the creator himself was directing and writing the feature, no one could contain their excitement.

One guy was even audibly heard cheering the first time a young Yoda pops on screen (who, and I must be in the minority on this, does not seem to look much like he did in the trilogy? I’m sure this will be a minor issue).

As for the actual content, what can I say? They are raising expectations past the roof! It shows a lot of young Anakin Skywalker, played by Jake Lloyd. Personally I haven’t seen him in anything, so I can’t comment much on my expectations of him as an actor, yet I’m sure he’ll be great!

It seems like the director is trying to make us have empathy for young Darth Vader, one of the most terrifying villains to ever hit movie screens. A bold choice, but one which I believe will give the film a striking emotional depth.

“Darth Maul looks to be a big part of this movie as he looks like a menacing presence on screen, with the trailer only hinting at what is to come from such a striking character”

Lots of moments stand out, like young Anakin meeting Obi-Wan for the first time, played by Ewan McGregor who, if I’m being honest, does not impress me much. McGregor is not a staple in Hollywood like Liam Neeson, and he will likely be one of the weak points of the prequels. Other stand-out moments of the trailer are electrifying speeders, space battles and, most importantly, lightsaber duels!

The double lightsaber held by the villain (rumours tell me that he is named Darth Maul) seems particularly cool, as does the character. He looks to be a big part of this movie as he looks like a menacing presence on screen, with the trailer only hinting at much more to come from such a striking character. 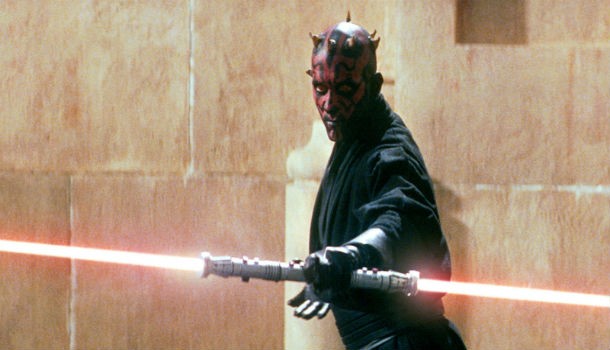 “Look how menacing he looks! What a great new character to keep during ALL the prequels”

The trailer also features princesses, and Jedi councils, and such elements that lead me to believe this will be a very politically charged film. I love that Lucas is adding to the Star Wars mythology like this, and there is no way those political elements will detract in any form from the action and pace of the film (no sir!).

I could really go on forever about this movie and the trailer, and I wholeheartedly believe it will be the single best blockbuster this decade has seen (I said it). Let me just finish by stressing that I could not be happier for this release, and I’m sure that the hype this trailer has created for the film will not be misplaced in a mediocre effort.

I also noticed a rather goofy character at 0:51 being electrocuted by one of the pods. He seems like the comedic relief in the film, and I’m sure his presence will be a short and welcome one, and that his humour will be smart and that he will actually be of some help to the Jedi. I have faith in this character.

The cost of student living: The middle-income children are frozen out