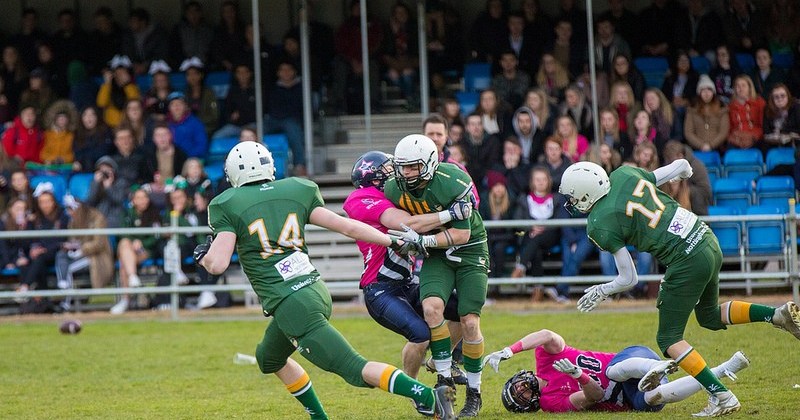 The University of Nottingham (UoN) have broken away from fourth-placed Edinburgh and are still chasing Durham in second position in the BUCS (British Universities and Colleges Sport) standings after another fantastic week of results.

Edinburgh currently lie on 2827 points, while the green and gold have extended their tally to 3139, (after a 60% win ratio this week), which is a mere 142 points away from eclipsing Durham’s total of 3271.

It was a wonderful week for our American Football club, with a 40-2 away triumph over Liverpoool John Moores on Wednesday, and a 48-28 victory over Warwick Wolves on Saturday. UoNAF have consequently reached the play-offs after an entire season unbeaten in the British Universities American Football League.

This bodes very well going into this year’s Nottingham Varsity Series where UoNAF will be looking to defend their title after toppling Trent for the first time ever last year.

For our badminton clubs, it was three wins out of a possible four with the women’s seconds and thirds victorious over East Anglia, Oxford Brookes and Worcester. Both teams remain top of their leagues in BUCS after the 6-2 and 7-1 triumphs.

“This bodes very well going into this year’s Nottingham Varsity Series where UoNAF will be looking to defend their title after toppling Trent for the first time ever last year.”

The Nottingham University Football Club’s (NUFC) second and third teams defeated Staffordshire and Warwick with the thirds finishing their season top of their league after the 3-1 win, having accumulated 22 points over the campaign with 7 wins 1 draw and 1 defeat in Midlands 3B.

The University of Nottingham’s Women’s Football Club earned a 2-0 victory over Staffordshire 1sts for our third team, which secured promotion from Midlands 4A, while the first team remain top of their league despite suffering a 2-0 defeat to Stirling in the BUCS Cup.

The 3s put in another great performance to win 2-0 and earn themselves a promotion ???? pic.twitter.com/HgPPiZreiS

It was 5 out of a possible 8 wins for hockey including a 3-0 win for the men’s seconds against Manchester’s thirds in the cup and a 4-0 win at home versus Aston’s first team for our women’s fourths.

In lacrosse, there were 25-0 and 24-1 wins for our men’s and women’s firsts against Southampton and Imperial in the cup, while our Rugby League firsts maintained their position at the summit of Midlands 1A after a 10-6 triumph over second placed Oxford at home last Wednesday.

“Squash had a storming BUCS Wednesday with eight out of a possible nine victories.”

Our Rugby Union men’s fourths were involved in an enthralling 23-23 draw against inter-city rivals Trent down at Highfields Park, meanwhile, there were good performances against Manchester and East Anglia for the women’s firsts and seconds. The firsts progressed to the semi-finals of the BUCS cup with that 22-14 home triumph over Manchester.

Squash had a storming BUCS Wednesday with eight out of a possible nine victories, the men’s firsts defeated Leeds 5-0 in the cup while it was a 4-0 win against Warwick in the cup for the women’s first team.

It was 5 wins for table tennis as UoNTT prepare for the PG Mutual National Championships which take place from 3rd -5th March in the David Ross Sports Village this weekend with Danny Reed and Kelly Sibley expected to dominate in the DRSV. In BUCS last Wednesday however the men’s firsts inflicted a crushing 17-0 defeat upon Sussex to ease to the semi-finals of the BUCS Cup.

There were three 12-0 wins for our men’s tennis teams with the seconds and thirds maintaining first positions in their leagues with triumphs over Trent and Oxford Brookes while the firsts were in cup action against Imperial yet remain top of BUCS Tennis North A – leading by a three-point margin.

“A massive congratulations again goes to all of our teams on another fantastic week of action!”

In ultimate frisbee, there was a 9-8 victory over Leicester seconds while there were three wins for UoN Futsal against Angela Ruskin and Trent on Thursday last week.

Impact Sport will be keeping a close eye on how all of our teams manage in the BUCS Leagues and Cups as we come towards the business end of the season and in the run-up to the much anticipated Nottingham Varsity Series which kicks off on the 25th of March.

You can see a full list of the University of Nottingham’s BUCS results here on the UoN Sport website as well as a comprehensive list of fixtures for tomorrows encounters with the green and gold being the university in focus for BUCS this week. A massive congratulations again goes to all of our teams on another fantastic week of action!

Moonlight: A Tale of Growing Up That Shook The Academy