Nottingham close in on second in BUCS

Another outstanding week of sport last week saw the University of Nottingham claim victory in 30 out of 49 BUCS fixtures, an impressive win ratio of 61% the like of which has increasingly become the norm for the Green and Gold this season.

With the BUCS Nationals taking place in Sheffield over this weekend, this was an important week for UoN’s BUCS teams. Before this weekend’s fixtures Nottingham have consolidated their third place in the league tables, moving to 2913 points and creating a commanding 315 point lead over closest rivals Edinburgh.

Loughborough still sit at the top of the University tables with a score of 3487.5, making it unlikely that they’ll be caught any time soon. However Nottingham’s strong results this week have closed the gap to second place Durham to just 217 points, a margin UoN will hope to reduce in the coming weeks. 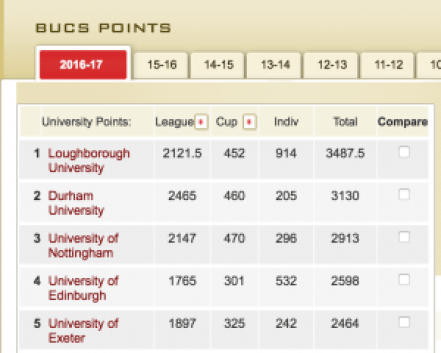 A particularly honourable mention this week must go to UoN’s Men’s Hockey club, who’s first team have succeeded in winning the North A League for the first time in their history. This is a stunning achievement and perhaps the highlight of the week, with the first team securing an impressive 6-1 away victory against Sheffield Hallam. 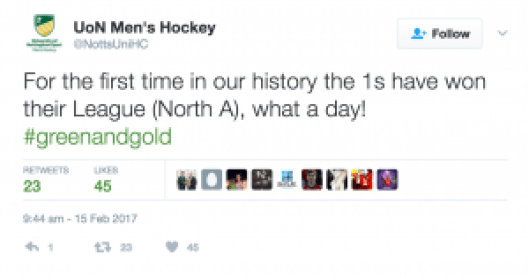 Similarly impressive were the displays of Nottingham’s footballing XI’s. The Women’s first and third teams defeated Leeds and Nottingham Trent 4-1 and 12-0 respectively, whilst the Men’s third team sent home Worcester after a convincing 4-0 thrashing.

Successes were also seen in American Football with another defeat of Worcester this time by 56 points to 0, and in the Futsal with a closely fought 6-5 victory over local East Midlands rivals Loughborough.

In Netball, the Women’s first team defeated Nottingham Trent in the cup 49 points to 44 and the fifth team beat Wolverhampton’s firsts 47-16. Likewise the Lacrosse Women’s second team defeated Oxford Brookes in the cup with a strong 19-4 home victory.

These were just some of the amazing performances we saw on 2017’s third BUCS Wednesday, and with Nationals currently taking place in Sheffield the Green and Gold will have both eyes firmly set on catching Durham in second in the BUCS Rankings.

If you want to see the full list of BUCS results for last week and next week’s fixtures then visit the University of Nottingham Sport website.

The “Ideal” Male Body Through Time

How Damaging was ‘Spectre’ towards the 007 Franchise?