It’s no secret that Hollywood is driven by popular novels, plays and musicals. However, the sad reality is that many of the original works can be overshadowed by successful movie adaptions. If we consider the flip side, film adaptions can also slaughter an original piece of work (I’m looking at you Marvel Studios). While I could happily complain about the poor quality of recent Marvel movies, I’m here to tell you about a film adaption that really matters – Fences.

Receiving four Oscar and two Golden Globe nominations, it was clear that Fences would be something of a success. In the end, Viola Davis won big taking home both an Oscar and Golden Globe for her role as best supporting actress. That said, awards do not always suggest a film is of good quality, but, I can assure you Fences is nothing but brilliant. 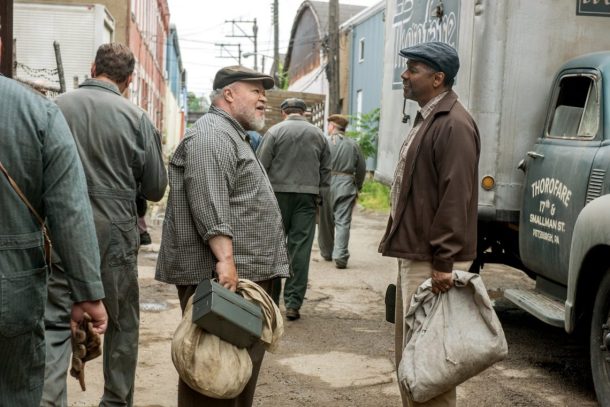 August Wilson’s play, Fences, debuted on Broadway in 1987 and quickly rose to success, picking up the Pulitzer Prize for drama and a Tony award for best play. Since then, Fences has been endlessly praised and frequently picked up and reproduced. Denzel Washington’s contemporary revival of the play does not fall short in favour of the original. There is no doubt Washington, Davis, Jovan Adepo (Cory Maxson), Mykelti Williamson (Gabriel Maxon) and Stephan Henderson (Jim Bono) shoulder the success of this adaption. The cast offer effortless acting, especially Washington and Davis, who have both featured in the Tony award winning 2010 Fences play revival.

The film itself audaciously takes on loaded topics of domestic dysfunctionality, race, pride, dreams and love with ease, offering an honest reality into the everyday 1960s African-American working class struggle. With the focus on Troy Maxon and his failed baseball career, the gripping plot and unsuspecting events will leave you engrossed in the lives of the Maxon family.

Despite all my praise, Fences contains a few flaws. For one, the attempts to re-apply the play’s original style becomes over-emphasised and often stifling. The length of the movie can also be challenging but the persistent channeling of symbolism, allegory and metaphor through subliminal on-screen scenery can be exhausting. I, for one, found the combination of heavy thematic topics alongside excessive literary representation monotonous and tiresome.

For Fences, it seems the movement from fiction to film has been nothing but a success. Would August Wilson be pleased with the adaption? Well, with Denzel Washington as a director, a stand-up cast and faithfulness to the original plot – the film adaption positively pays homage to August Wilson’s creation.