The University of Nottingham’s Men’s Futsal team were extremely unfortunate to lose out 5-6 against a strong Nottingham Trent outfit on the third day of Nottingham Varsity Series 2017. An agonising but brilliant late winning, long-range strike secured the win for the away team, after an enthralling end-to end encounter at the David Ross Sports Village.

UoN were certainly looking to cash in early at the new £40 million facility, and they did when the team’s heart and soul, as well as club President, Sam McGrath, fired into the bottom corner after an excellent Green and Gold breakaway.

However, Trent came back strongly buoyed by the NTU faithful at DRSV, as UoN failed to capitalise on Trent’s Danny Miranda being sent to the sin bin. The men in pink established a two goal lead, thanks partly to a brace from the game’s stand-out performer Lewis Herron, who made it 1-2 with an angled strike which beat UoN goalkeeper Ben Lazarus at his near post.

Kasey Riley added a third for Trent after Nicolas Papadopoulos lost possession in the University of Nottingham half; he darted towards the UoN goal and slotted the ball past Lazarus with aplomb. 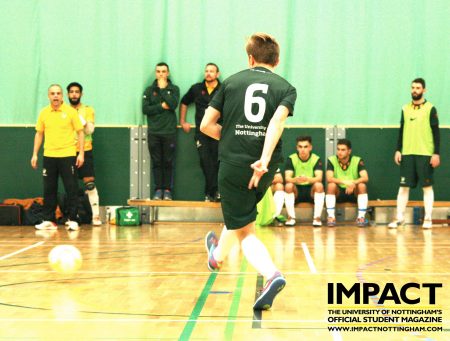 However, their joy was to be short-lived, as a brilliant 5 minutes from UoN turned the game completely on its head. Dan Slater cut inside from the left and hit a fiercely struck shot which was saved by the Trent keeper, only for Charlie Hyman to ignite the comeback when he prodded home the rebound to make it 2-3.

Mo Maghribi, in his tenth year with UoN Futsal and despite a leg injury pre-match, was able to equalise with a tap-in after Robert Symes had his shot saved. The home side came close again with Elliott Coleman brilliantly lobbing the Trent keeper after a long Ben Lazarus throw, but he was denied only by the frame of the goal.

Less than a minute later and the home side took the lead. Dan Slater scored after some brilliant one-touch passing and silky skills to leave the Trent keeper flat on his backside, making it 4-3 going into the break.

Green and Gold ultras, the self-proclaimed ‘Lungs of the DRSV’, which contained fans dressed as flamingos and bananas in the ‘Daniel Slater’ stand, went into raptures over on the far side. 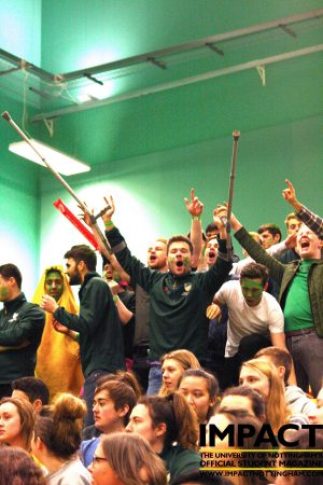 The game was far from over, though, as Trent came out all guns blazing in the second half. Goals from Timi Ol and James Webb for NTU made it 5-4 in favour of our inter-city rivals.

This did not discourage UoN, however, and with just two minutes left, they were able to find an equaliser and make it 5 goals apiece. McGrath again provided the goal, tapping in after great build-up work from Elliott Coleman, Danny Edwards and James Barnett. 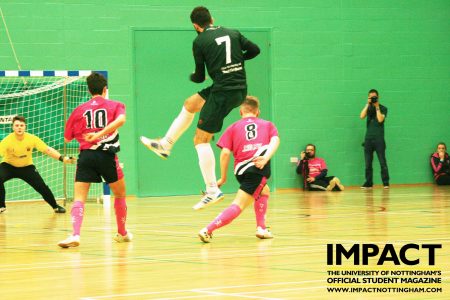 Then the unexpected happened. With penalties seemingly the likely outcome, Mwiza Sichone smashed a shot in off the post for NTU with thirty seconds left on the clock; that would be the last goal of the game, with it finishing 6-5 to Trent, and making it 3-2 in the Varsity series in favour of UoN.

Last year’s game between the two sides finished 2-1 on penalties to UoN, after a 6-6 draw. It was the game which clinched the 2016 Varsity Series for UoN and it was a similarly exciting spectacle in this year’s fixture, as both teams started with attacking intent which lasted for the entire match.

Trent showed a lot of class and composure on the ball, as well as energy and pressing without it, as you would expect from a team who have won the Premier Midlands league for the last two year’s running. However, it was UoN who took the lead when McGrath fired his shot past the away keeper after a clever pass from Papadopoulos.

McGrath was understandably disappointed with the result, but proud of his team after the match. He told Impact: “Obviously we knew it was going to be a close game, it was just a shame we were on the wrong side of it. We’re hugely thankful to both sets of supporters for making it a great spectacle. It’s been a privilege to play in such a great venue and occasion in my last year of Varsity, and to be president of UoN Futsal”. 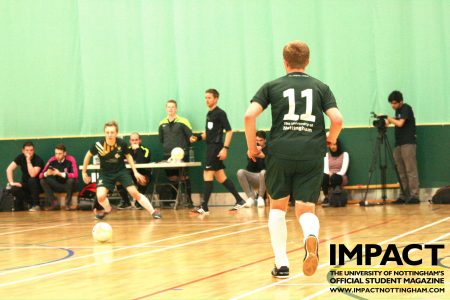 A lot of Trent’s play revolved around their number 10, James Webb, who demonstrated his quality for the duration of the match, with his clever chipped through balls finding teammates on numerous occasions. UoN could be thankful for their goalkeepers, Lazarus and Chowdhury, for perhaps keeping them in the match throughout.

It was Webb who was instrumental in Trent’s first goal and equaliser, as his mazy run resulted in Heron poking home, and Heron was able to grab another just minutes later, when the ball broke for him in the area and he flicked a shot past Lazarus in the UoN goal.

One thing that could never be doubted was the UoN team’s resolve, with Hyman, Slater and Maghrbi turning the game from 1-3 to 4-3 in favour of the Green and Gold before half time.

Perhaps controversially, due to a yellow card for dissent at half-time, Timi Ol emerged for the second half and then was able to make it 4-4, after he nicked the ball from Papadopolous and beat Chowdhury in the UoN goal with an excellent finish from a tight angle.

Webb was then able to give the away side the lead when another of his chipped through balls evaded everyone and trickled across the line. Yet even then the home side didn’t give up, and they deservedly got the equaliser with just two minutes left when McGrath turned the ball over the line.

The game was then decided by a moment of brilliance from Sichone, which no one expected in the last thirty seconds, whose thunderous shot from a corner went in off the post and secured the win for Trent.

Perhaps the result was a little harsh on the home side, who never gave up against their higher league opponents, and they will be looking to test themselves against Trent again next year, both in Varsity and in the league, after a superb season saw UoN finish top of the Midlands 1A.

For this year, however, it’s Nottingham Trent who take the victory, and thus move within one point of UoN in the Varsity series, with the score at 3-2 after the day’s fixtures.