Despite being one of the nine events to take place on Super Wednesday, the second of the 2017 Notts Varsity series, the golf match between the University of Nottingham and Nottingham Trent took place away from most of the other sports at Ruddington Grange Golf Centre, giving Trent a home field advantage. 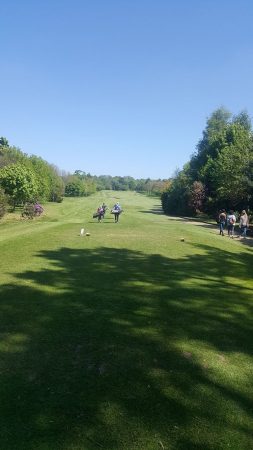 Weather conditions for the fixture were ideal, with clear blue skies and a cool breeze preventing players cooking in the sun, but not strong enough to effect the movement of the ball. The first event of the day was the foursomes. In this round five groups of four, each containing a pair from UoN and Trent, went round the course after staggered starts.

Each player in a pair took turns taking a shot, putting pressure on both players to perform with every effort. This resulted in a highly tactical affair as the pairs looked to place their shots in positions that best suited their partner’s strengths. As the event went on Trent began to gain the ascendency, and, by the halfway mark of the ninth hole the Trent army held a narrow lead in most of the games, reflecting the stronger form they have showed in this year’s BUCS season.

Yet despite the Green and Gold losing the first point of the day, UoN were able to secure two wins and two draws, to become outright leaders 3-2 after the foursomes. As both sides paused for lunch, confidence was high amongst the University of Nottingham players, who felt that, man for man, they were the stronger of the two teams going into the singles in the afternoon.

When the singles finally teed off at 3pm, both sides were well rested and refreshed. In each group, there were four players, two Uni of and two Trent. The Green and Gold players had got their eye in now and were playing much better with a proper understanding of the speed of the greens. Trent by contrast seemed to struggle in the first half of the course, missing shots they had been nailing earlier on.

However, the tide swung in Trent’s favour between the tenth to fifteenth holes, and it was the University of Nottingham players turn to crack under pressure, spending increasing amounts of time in the rough as play entered the late hours of the day. 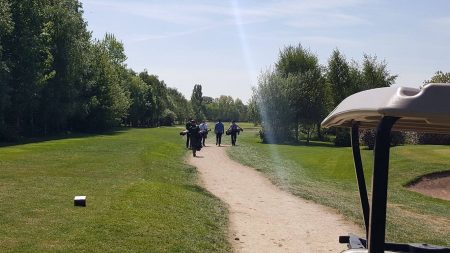 In the end, it all came down to the final hole. With the scores at 7.5-6.5 to the University of Nottingham, the final players from both universities made ready. Trent’s player was leading by one shot at the final hole and if he won or drew, the match would go to a play-off for a second year in a row. However, he was unable to keep his composure at the last, hitting the key shot out of bounds and losing the hole as a result.

After an incredible 10 hours of closely fought play that ran from the start to the very end of Super Wednesday, the University of Nottingham were able to retain their title as winners of the Notts Varsity Golf. This victory ensured that the Green and Gold were victorious in claiming a critical Super Wednesday point, seeing them edge closer to retaining the series as a whole.