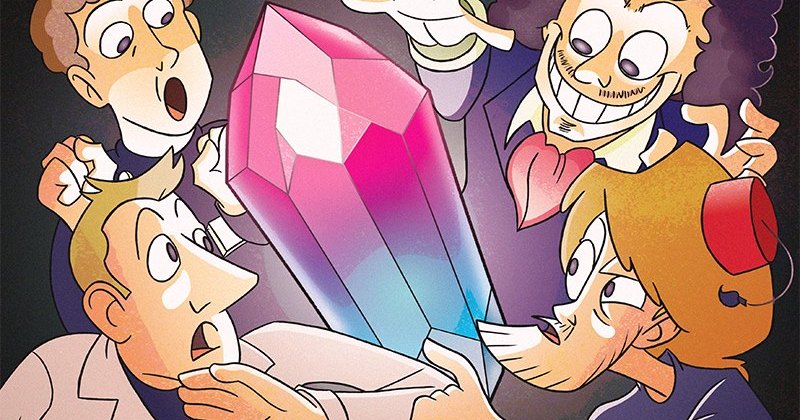 An intrepid band of adventurers have set out on a dangerous quest. Threats lurk around every corner, from grumpy barmen, to mysterious monkey men, to strange hybrid creatures looking for love. The adventurers will have to use everything they’ve got to survive this journey and complete their quest: to find the Crystal of Gumsmastaa.

However, there’s a twist. In this production, the adventurers are not the actors, but the audience. Guided by their Gamesmaster and his band of minions, audiences will be put through their paces to determine whether they really have what it takes to find the mysterious crystal.

While the audience might be the adventurers, the cast and crew are the real stars here. Laurence Cuthbert plays the mysterious Gamesmaster, effortlessly guiding audiences through each obstacle that comes their way. Despite heavy amounts of audience participation in the show, Laurence always ensures his audience are comfortable, never forcing anyone to do anything they’re not happy with. His minions, Chris Trueman, Josh Mallalieu and Matteo Bagaini, are also extremely talented, switching between numerous wild and wonderful characters seamlessly. Each role is approached with such gusto that it’s hard to believe that all of them are played by the same small cast.

Crystal Quest: A 5D Adventure is as much an exercise in imagination as a piece of theatre, with audiences invited to explore countless new locations and characters in the blink of an eye. One particularly inspired part of the production involved the Gamesmaster asking audiences to close their eyes whilst he described the events unfolding, using features individual to each performance to create the intense final scenes.

In addition to the cast itself, this journey in imagination is aided by the simple but effective sound and lighting design, which really brings to life each new setting. The costumes are also an excellent addition to the production, from Laurence’s imposing and impressive Gamesmaster’s cloaked outfit, to the quick-change costumes of the minions, which help strengthen the portrayal of each of their individual characters.

“Crystal Quest: A 5D Adventure is a one-of-a-kind production that can be watched again and again”

Whilst this play may not be for those who don’t enjoy audience participation, or who prefer more ‘traditional’ forms of theatre, it cannot be denied that it is an entirely unique and extraordinary production. Each performance is different and individual, with audience members calling the shots and making the decisions about where the band of adventurers will go next.

This means that each performance must have a large amount of improvisation due to the unexpected nature of audience decisions, but this is completely unnoticeable due to the talent and skill of the cast. In summary, Crystal Quest: A 5D Adventure is a one-of-a-kind production that can be watched again and again.