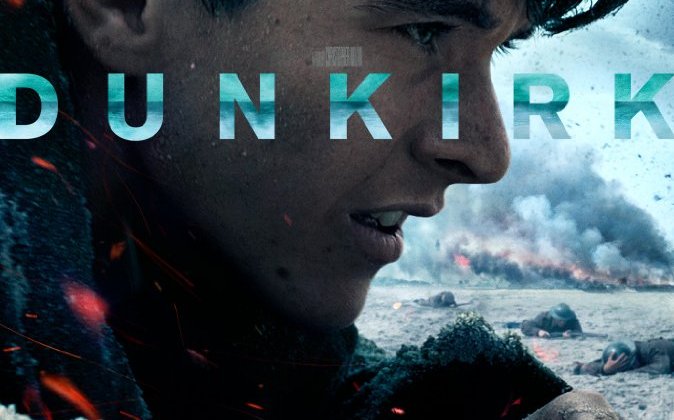 Three. Two. One. Mark. Christopher Nolan has taken his shot at the war film genre. ‘Dunkirk’ requires proper recognition as something that, for the most part, could be a timeless piece. Between Tom Hardy flying soundly in the Supermarine Spitfire-fighter aircraft (as a Royal Air Force pilot) and Hans Zimmer’s tension filled ‘tick-tock’ film score playing throughout each scene, one needs to realise how well-made this film truly is.

The film takes up the classic WWII historical event upon the beaches of Dunkirk when roughly 400,000 British and French troops found themselves cornered and surrounded onto the grim, hopeless and white sandy beaches of Dunkirk, France. While actors such as Tom Hardy, Harry Styles, Cillian Murphy, and Kenneth Branagh all are brilliant in every scene, the audience can begin to be drawn away from actors’ notoriety, and into three different elements they are surviving within.

The Planes. The Beaches. The Boats.

When separated, these elements can give you something, just not everything. Once combined, as Nolan has successfully done in ‘Dunkirk’, the feeling of understanding of how the evacuation of Dunkirk was accomplished through bravery, survival, and sheer luck (to name just a few) is quite clear.

“One of the best-formulated casts to date”

Of course, this is not to belittle the cast Nolan has summoned up in the slightest. From what I could tell, Nolan has gathered one of the best-formulated casts to date. This does not mean they’re the best names of Hollywood, but that Nolan has carefully picked each character, all while ensuring that each role are accurately represented by actual British or French actors.

Yes, Harry Styles, Tom Hardy and Cillian Murphy are incredible names to be thrown about. But the roles they play just make sense – they fit perfectly for each of them. Throwing the once unknown (yet soon to become household name) is Nolan’s “everyman” Fionn Whitehead. Why Fionn rather than Harry Styles for the role? Because you don’t know him, you can make what you like of him, and he could be anyone. He’s the perfect “everyman” persona that Nolan could have chosen.

“The story of Dunkirk was one of desperation”

Now, from one scene of watching a father and son trek across the channel in their small ‘pleasure yacht’ to aid the soldiers, and then to witness those very soldiers desperate for home upon a warship only to get bombed moments later gives you an idea of what was at hand. The story of Dunkirk was one of desperation, to never surrender, and by merely surviving and escaping the site of Dunkirk was their own means of never surrendering.

What Nolan has accomplished in this narrative is the ability for us to become enthralled by the story, what each character portrays either verbally or physically, and anticipating for what is soon to follow.

Aside from the story itself, the cinematography is one that refuses to let you look away. Nolan, who’s notably dedicated to giving the best image quality, uses cinematographer Hoyte van Hoytema, who collaborated once before with Nolan on ‘Interstellar’, hauls the large IMAX camera for every scene – each scene being either on the open beaches or within the tight-knit fighter aircrafts and boats. To point out one reoccurring and memorable scene is of every shot captured of Tom Hardy within the Spitfire and the Aircraft itself.

What’s truly impressive though is Nolan’s dedication to the factual representation of the story, which only gives the audience an even better viewing of the story at hand. In a recent exclusive by Total Film, they noted of Nolan’s use of period-correct planes, boats, and warships all in getting the perfectly authentic film. Avoiding the route of Computer Graphics, everything captured on camera is true to the eye. “With CG these days, it’s perfectly possible to make an absolutely accurate film that is completely fake,” Nolan stated to Total Film.

Christopher Nolan has made some incredible feature films, and ‘Dunkirk’ is without question one of the best ones yet. Hans Zimmer’s film score fills the story to the brim with tension, the cinematography is beautiful, and you’ll want to watch it to the very end and feel incredibly satisfied. The question isn’t if you’ll go and see it, it is about the when and the how you will be seeing Nolan’s masterpiece.

The Verdict:
Gather every penny you have and see this tonight.

Images courtesy of  Syncopy via IMDB

Artists for Grenfell – A Closer Look at the Song’s Success

Look Out For… August