Trailer Watch: The Shape of Water

The first trailer released for Guillermo del Toro’s The Shape of Water sets it up to be beautiful, heart-warming and poignant in equal measure; personally, I cannot wait.

Set against the Cold War, Elisa (Sally Hawkins) is a mute janitor whose work at a secluded laboratory often leaves her feeling lonely. When her and her colleague, Zelda (Octavia Spencer), discover an amphibian-like creature in the water tanks, Elisa develops a profound connection with it. Nevertheless, their relationship will have to withstand the anger of government officials, lead by Strickland (Michael Shannon).

The film boasts a superb cast, with the oft-overlooked, Oscar-nominated Hawkins taking centre stage, after breaking into Hollywood with 2013’s Blue Jasmine. Supporting her is Spencer, who – having experienced a slight lull in her career after the tremendous praise showered upon her after 2011’s The Help – is back in true form following the boost given to her by the justified acclaim surrounding Hidden Figures earlier this year. The unification of their talents with that of del Toro’s will hopefully lead to a fruitful collaboration, especially as his approach to fantasy-horror is unique. He effortlessly causes terror from a peripheral part of the plot to permeate into the bulk of the story, leading to an intense, intriguing film. 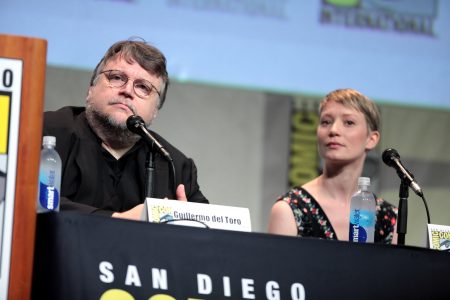 Judging by the trailer, the parallels with del Toro’s 2006 film Pan’s Labyrinth are obvious – both occur during times of war and feature an isolated female protagonist who befriends an other-worldly creature. Hopefully, The Shape of Water will follow in the path of its spiritual predecessor in successfully combining fantasy with an intensely human story, while also carving out its own name. It’s a tough job to crack, but del Toro has pulled it off before; with any luck, he will do so again.