Why I’m Over the MCU

The battle between Marvel and DC sometimes seems as old as time itself, but in recent cinematic history Marvel’s Cinematic Universe undoubtedly has had the upper hand over DC’s string of predominately sub-par movies. However, as the franchise edges closer to the big blowout that is Infinity War, yet shows no sign of stopping after Phase Three, it’s time to ask – when does it become too much?

Just last month, Spider-Man: Homecoming was released to rave reviews, and has already grossed $702.1 million at the box office, a figure not at all to be scoffed at. Two months earlier, Guardians of the Galaxy Vol. 2 achieved a similar success, and the November release of Doctor Strange ensured that Marvel also ended 2016 on a high. 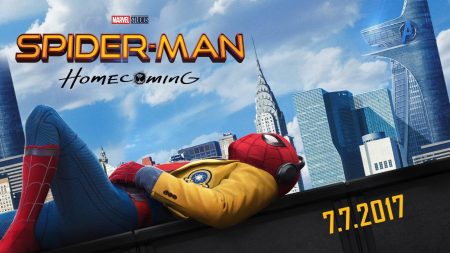 Poster for Spider-Man: Homecoming, the latest addition to the MCU.

Considering the overwhelmingly positive response to most MCU movies since Iron Man, this is hardly a surprise. The films Marvel continue to churn out are consistently entertaining, but much like last year’s Rogue One tricked audiences into thinking they were watching something big by offering up a heartless reel of re-hashed Star Wars tropes under the guise of a ‘movie’, Marvel’s releases also seem to grow increasingly thinner and more self-referential with every release.

Captain America: Civil War, one of the MCU’s most well-received films to date, was a true cinematic spectacle, a constant edge-of-your-seat play of internal tension between an apparently unbreakable group of specially-enhanced individuals. But on the small screen it’s too big to be intimate, with an undercurrent of a mystery plot that takes way too long to play out and an unnecessary hour-long opening which seems designed to do nothing but delay the inevitable action sequences and take the audience through a tour of the MCU’s used-footage self-referential world.

Spider-Man and the Black Panther (the latter of which still isn’t expecting his full-length cinematic debut until 2018) are shoehorned into the Avengers mix, and without previous episodes based around these characters the audience is unable to feel any emotional attachment to either. Other characters such as Ant-Man seem to appear during the film’s too-long civil-war action-interlude simply to add a sense of spectacle.

In retrospect, Civil War’s saving grace comes only during its last half-hour, and there is more tension in the fight between Bucky, Cap and Stark than there is in the rest of the entire movie. Full of subplots and half-arsed character developments which seem to trail off and go nowhere, Civil War is a worrying taste of what Infinity War (which will include many more heroes than on offer here) might offer. That’s reason enough to stop funding this multi-billion dollar franchise which has grown way too big for its own super-shoes. 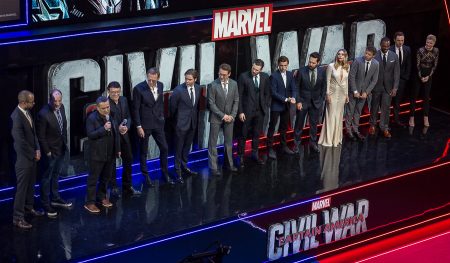 Cast members at the premiere of Captain America: Civil War.

By continuously building up to a climax which comes way too late, Civil War went a step further than Marvel’s previous overloaded movies. It essentially becomes an advertisement for itself, drawing out its own length to allow these irrelevant second-wave characters an illusionary room to breathe after being unceremoniously dumped into the Avengers crowd. It also gives the movie a false sense of the epic, to appease reviewers looking for the next ‘serious’ superhero movie.

A two-and-a-half-hour runtime is justifiable for The Dark Knight, a film full of ideas, motifs and endlessly compelling characters and themes – it isn’t justifiable for a second Captain America sequel which seems to spend no more than half of this actually continuing with the story The First Avenger and Winter Soldier set up, and even less time asking the questions more serious superhero movies, such as Sam Raimi’s Spiderman trilogy or Nolan’s Batman series, pose.

The only line in the entire movie that carries any weight is glossed over by Peter Parker’s characteristically but distractingly juvenile delivery – “When you can do the things that I can, but you don’t, and then the bad things happen – they happen because of you”. Well meant, kid, but not so well said. 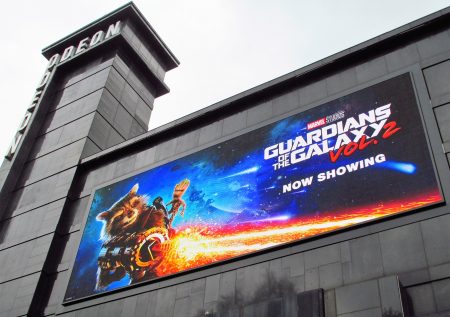 Poster for Guardians of the Galaxy Vol. 2, sequel to one of the MCU’s most surprising successes.

In many ways, even the best of the MCU’s films seem to be acting as advertisements for the series’ eventual climax – though there are some exceptions. In just two movies, the Guardians of the Galaxy mini-series has established stronger inter-character relationships than the rest of the MCU managed in fourteen.

Many of the origin stories since Phase 2 might not have stood on their own two feet outside of the MCU. The entertaining Ant Man was nevertheless a tonal mess; Doctor Strange started off promising and appeared visually intriguing, but it quickly became Marvel’s most paint-by-numbers superhero movie in recent history, and undoubtedly the one with the laziest villain and ending in the franchise – and that’s saying something.

“I simply can’t justify investing time and money in a piece of cheap entertainment when I know I can be just as entertained by…my old DVD collection.”

Maybe I’m being a bit unfair, given that I haven’t yet given Homecoming a try, but I’m not sure I want to. Nothing in the MCU has had the same sort of depth Raimi’s incredibly humane and nuanced Spider-Man films showcased, and I’m not ready to see that franchise get slaughtered a second time around, this time forced to fit into the never-ending ‘Adventures of Tony Stark’ saga.

Yes, Tom Holland is supposed to be the most true-to-the-comics Parker yet, yes it’s supposed to be fun. But after finding myself unable to sit through my first re-watch of Thor since its theatrical debut, and my stomach churning at how much I loved Civil War when I first saw it at the Savoy, I simply can’t justify investing time and money in a piece of cheap entertainment when I know I can be just as entertained by choosing a disc from my old DVD collection.

The point of this article isn’t about whether it’s more important for a movie to be fun or meaningful, but to show that they can and should be both – just as entertainment without depth is forgettable, a piece of art with a world of original ideas will fail if it isn’t engaging enough to garner mass appeal.

The truth is that the MCU, by refusing to give audiences anything thought-provoking or that they haven’t seen before, is stagnating – and so are cinema’s other ‘universes’. DC might be chasing Marvel’s tail with the release of Wonder Woman, its first good DCEU movie, but there’s no guarantee Justice League will follow suit. Even the recent reboot of the Star Wars universe is growing too fast for its directors to handle.

With new expansions and cinematic universes propping up every day (The Mummy – really?), hopefully Marvel will feel pressured to release more innovative and engaging superhero flicks in the vein of Logan. But for now it seems like all we’ll get is the same pre-digested tosh until people stop paying for it.

It is the duty of cinemagoers to pressure the industry to release something worth paying for, and I can’t help but feel the Marvel Cinematic Universe is heading way off-course, as Hollywood keeps on churning out the same hit-and-miss nonsense, and consumers keep turning up. Marvel might want to remember that “with great power comes great responsibility”, and fix the formula before moviegoers as a whole start to feel the same.

Article images courtesy of Marvel Studios via IMDb, and ‘Ibsan73’ and ‘DAVID HOLT’ via Flickr.