Green and Gold light up the opening round of BUCS

The University of Nottingham find themselves leading the pack amid the embryonic stages of the 2017-18 season in the British Universities and Colleges Sport (BUCS) league. Netball and Badminton shone, whilst their are only few early strugglers. Nevertheless, UoN are sitting pretty atop the table with 1702 points in a year where they are hoping to turn themselves into genuine challengers. 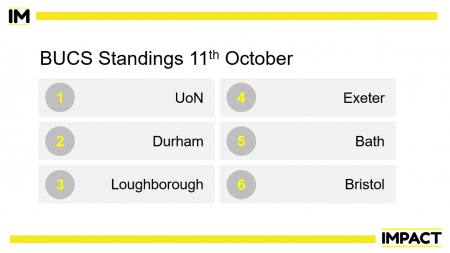 Green and Gold, always believe in your soul…

Women’s Badminton 1st had a near perfect start to their campaign, in which they’ll hope to put in another strong challenge for the Championship. They made it all the way to final of the knockouts last year but were beaten by a Loughborough side who they had beaten to the title in the Premier North league by three points. However, a 5-3 win away at Birmingham dispelled any fears of a lag from before the summer.

Moreover, they followed up their win by repeating the same scoreline and reminding Loughborough that UoN are here to stay. The Men’s 1st faired not so well, however, coming on the wrong side of yet another 5-3 scoreline with Loughborough refusing to go home empty handed.

In Hockey, UoN enjoyed a considerably strong start to the new season. Men’s 1st set the tone with a 1-2 win away (if you can call it that) to Trent – and whilst they were one of the few teams to draw on the 11th October, the others more than made up for it, with Women’s 1st leading the way for four other teams to claim victories as they beat Loughborough 4-1. The rest collected draws, with Women’s 4th being the only Hockey side to fall behind.

Tennis also shone on court. The Men and Women’s 1st teams won at Sterling and Northumbria (both 10-2) respectively, with both sets of 2nd and 3rd teams also sweeping aside the opposition. In Table Tennis, we were a little less consistent, with Women’s 1st among the three teams to take home the spoils, whilst the other three were less sucesfful. The balanced should be tipped on Wednesday 18th, however, as the Men’s 1st welcome Sheffield to DRSV.

Both of our Volleyball Firsts took on Sheffield Hallam at DRSV, as the boys suffered a 0-3 defeat and the girls hung on for a 3-2 win. Whilst in Fencing, the Women’s 1st narrowly succumbed to a 109-105 defeat in Newcastle. They’ll hope that this is the year where they can really kick on, with two Championship first round exits being their best results in the past four years.

Over in the pool at Oxford Brookes, Waterpolo Men’s 1st blew the home side out the water with a 32-2 annihilation, whilst on home waters their female counterparts have a 10-36 defeat to St Andrews to contemplate.

Football is where UoN will be really scratching their heads, however. Our seven teams took the field but only three; the Men’s 3rd and 4th and Women’s 1st went into the changing rooms at full time with a result. The Men’s first team outfit allowed Oxford to take a 0-1 win back down the M1 as NTU Women’s 1st left Uni Park having secured a 1-1 draw.

In Rugby League, the Firsts have had a difficult first two results. Last year’s BUCS Rugby League Trophy Champions made a trip up North that they’ll soon want to forget, taking a 28-0 loss at the unsparing hands of Newcastle. Their 12-56 defeat by Northumbria on the 11th October won’t help them move on too quickly either. Rugby Union spared most Green and Gold blushes, however, with all but the Men’s 4th team being rewarded for their efforts. This is especially the case for the first team, who snatched a 19-18 win up at Newcastle and then followed it up with a somewhat more comfortable win against Bishop Burton, winning 29-6.

Squash are one of Uni of’s prize assets, consistently challenging for the Championship, and they gave a hint as to why in their opening round of fixtures. With over half of our teams winning fairly comfortably, its exciting to know that the first teams haven’t even set foot on court yet.

Lacrosse and Netball also showed a known strength in depth as each club lost only their lowest level matches. Most notably, Women’s Lacrosse 1st breezed past St Andrews, as the Men’s 1st convincingly beat Manchester. Meanwhile, Netball’s firsts claimed some local bragging rights when they took on NTU and won 34-28 before the two prime Lacrosse teams picked up sticks again, going on to make it consecutive victories, with the men securing a 15-7 win against Loughborough and the women bettering that scoreline by six goals.

From Board Game to Film – Why Clue is a Great Movie