The University of Nottingham Futsal team made light work of what might have seemed a testing top of the table clash against Atletico Birmingham on Sunday evening. The Green and Gold entertained a crowed of over 150, putting twelve goals past their early title challengers, with the only blotch being the four goals conceded in the second half.

Impact spoke to one of a hat-trick of hat-trick heroes in Ryan Leyshon to gauge how surprised the group were at the ease of their victory:

RL: “I didn’t know what to expect [from Birmingham]. The only thing I predicted is that we would have a better tactical knowledge of the game. I knew that if we stuck to our game, we won.”

The home side put out a strong line up for this National League game, which followed a flurry of BUCS fixtures at DRSV where the UoN 1s drew three goals all with Bedfordshire 1s, before the 1s came back out to beat Derby 1s by seven goals to five, whilst the 4s joined the 2s in the last 16 of the Conference Cup with a 14-3 victory over Birmingham City University 1s.

The National League side got down to business from the off, eager to continue a strong start to the season which saw them win 2-11 against Liverpool Futsal Club before claiming a 1-5 win on the road again in Sheffield. Showing the control and flair that would be expected of a side that achieved mid table in the top division Super League last year (see below), they allowed Atletico only one real opportunity to get the opener before Olly Whaley put away one of UoN’s many early chances after six minutes. Whaley opened his account following a corner with a lovely first time shot to re-direct the ball onto the top left of the cross bar and into the net.

Whaley could have scored again just a minute later, missing an absolutely certain chance from a yard out. Despite the early excitement he would have to wait eight minutes before the chances started flowing again for him to get his second.

Then the rest of the team started chipping in, with Ryan Leyshon finding the net twice before the break. If that wasn’t enough to shift the plaudits from Whaley, the two goals were something to behold. Both rockets with the first being an effort two Brum keepers would have struggled to keep out.

Four UoN goals to Birmingham’s zero at the halfway point, and the home side had earnt themselves a healthy lead to hold onto in the last twenty. It seemed like enough for the win with the ease of which the first half had panned out for the Green and Gold, but even the players were guilty of having to much confidence in Birmingham’s lack of goal threat to secure the three points.

In fairness, their even faster start to the second half saw them notch the fifth and what would prove to be winning goal after two minutes, with Pawel Tomcsak winning and scoring a penalty after he was fouled in the box. The resulting shot was so powerful it cut the opposing keeper’s face, who had to be subbed off.

Tomcsak fired home again to cement his position as top scorer in the National League North, with UoN adding another two goals through O’Sullivan and Dan Slater before Brum found the net – albeit through a Jonathan Alvarez own goal. A quick response meant Slater and Leyshon added goals, the latter getting his hat-trick on 28 minutes, but you sensed that UoN were letting the defensive side of their game slip when Atletico grabbed another at the half-hour mark.

Dylan Harris-Newton made it double-figures for UoN but again their potency in front of goal allowed greater complacency at the back, as Brum found the net twice to make coach Mark Forrest call a time-out and ensure that his boys don’t allow any hope for their frustrated opponents.

Whatever he said worked. Tomcsak and Whaley subsequently secured the next two hat-tricks of the day, and UoN were able to see the remaining six minutes out with a slightly unordinary yet astute decision for the home side to stop the flow of goals at both ends and maintain their margin until the final whistle.

FULL TIME and what an emphatic win that was at DRSV for @UoNFutsal, they were in control from the off, brushing Atletico Birmingham aside and cementing their place atop the National League. Report and interview with (one of) the hat-trick heroes to follow… #GreenandGold pic.twitter.com/e0vQ3ODU3d

It was an all round confident display from the Green and Gold, but as Leyshon alluded to after the game, with that confidence their might have come a mentality lapse as the home side looked up at the favourable score line on the board:

RL: “It’s positive to have a large score line, but on the other hand it was a negative to concede four against a team where shouldn’t have conceded had we stuck to our game.”

What do you put that down to? In the first half you were completely in control, and whilst you scored more in the second you also let in four. Was there an issue of complacency?

RL: “It is an issue of mentality. For whatever reason, it’s happened a few times. Like the gaffer said to us, in a more important game that could cost us. We have the luxury of learning from mistakes now, and we have to make sure that a lapse in mentality does not occur when it could really cost us.” 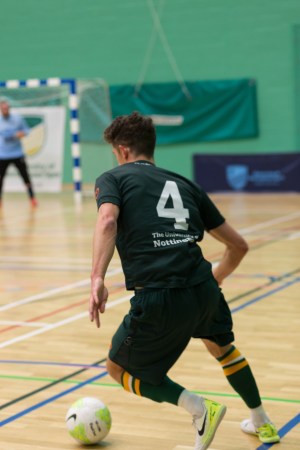 Tom Gascoyne in action for the #GreenandGold (Photo: Ana Mihajlovic)

The Public’s Lost Love with Dove