Connor Higgs does the important 'legwork', comparing Lenton's pubs so you don't have to

Considering the sheer number of students who live in Lenton, it’s unsurprising that there are so many pubs between University Park and Nottingham city centre. On 31st October, Impact decided to find out which pub was best. 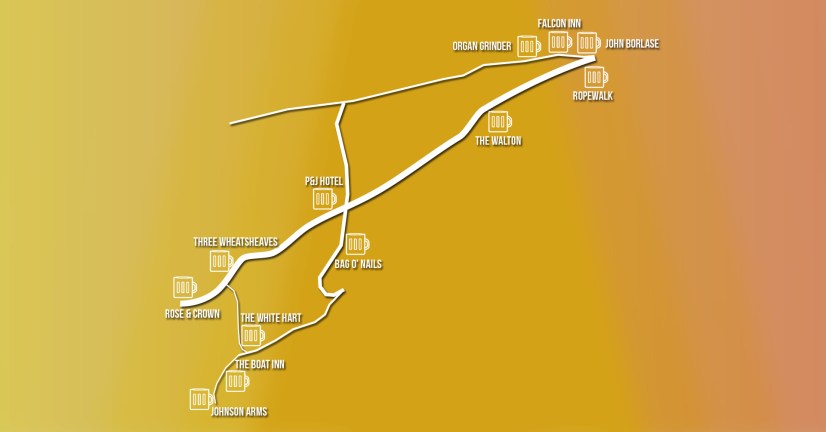 Located on Abbey Street, just down from the junction for the A52 which the 34 flies/crawls past, The JA was an expensive £3.30 for a Rock Bitter Ale (and £3.40 for a Carlsberg for the lager-only drinkers out there).

With a large garden and quaint, traditional pub atmosphere, The Johnson Arms looks a prime spot for the summer months. However, on a cold October evening, the walk plus the price of the pint did not sell it.

A short walk between both The Johnson Arms and The White Hart, The Boat Inn was another with a quaint feel, where you would expect a regular crowd of non-students. Narrowly cheaper than TJA at £3.25 for a pint of John Smith’s (£3.35 for a Foster’s), the American diner interior was a nice touch. The price of a pint, though, was still too dear to suggest that this could be a regular student haunt.

On the corner of Gregory Street and Abbey Street, this Greene King-owned pub is a familiar one for a number of students, and it is easy to see why. With pints of Carlsberg only £2.59, a lot of screens for watching sport (this particular Tuesday was a Champions League night), and even bookable tables with their own screens, this felt much more like a pub in which students would happily find themselves.

The Bag of Nails:

One of the prime places for a pint for anyone living on or around Lenton Boulevard, ‘Bag’ have upped their pint price from £2 to £2.25 for this year, to the disdain of many.

However, it remains one of the cheapest pints in Lenton, and location-wise, it is hard to beat for a lot of the students. However, a lack of Sky Sports (with only BT Sport on offer) means you will have to pick and choose if you’re looking for a particular sporting event.

Often simply the hotel most students walk past on Derby Road to get to and from University Park, this hotel’s bar can be used to grab a pint if you fancy somewhere quiet enough to have a calm conversation on the way home.

For those readers of Impact with more expensive taste, the P&J also has Blue Moon on draught, if you are willing to shell out £3.90 for a pint.

Situated on Derby Road, just before Faraday Road, the price of The Three Wheatsheaves’ pint is among the very best on this list. Location-wise, it is very close to the heart of Lenton.

Live sport is on offer on both BT Sport and Sky Sports, with pool and darts also on offer. It is easy to see why students would flock to this local gem.

Located just before Triumph Road on Derby Road, The Rose and Crown’s happy hour prices, where pints are half-price, are second to none. With great food, pool, darts, Sky Sports, and two different pub quizzes (Friday and Sunday), every box appears to be ticked from a student’s point of view.

The Walton is a beautiful place to have a pint. With emblem-blazoned pint goblets, an outside patio adorned with fairy-lights, it is as close to feeling distinctly middle-class as I would imagine students can get.

In the summer, the patio is clearly a great place to sit and relax, despite the fairly steep price of a pint in comparison to places further down the hill.

Situated at the top of the hill, The Ropewalk is a perfect place to head for a few drinks before moving down the hill and into town. On Wednesdays, drinks for just £1.50 is an enticing pre-Crisis prospect, especially with their set-up for beer pong.

Located directly opposite The Ropewalk, the Sir John is a rather cosy little pub. Running a pub quiz on Tuesdays, it forms a part of four pubs at the top of the hill (The Ropewalk, The Sir John Borlase Warren, The Falcon Inn and The Organ Grinder).

At the top of the hill, just at the top of Derby Road, The Falcon Inn forms part of the 4 pubs situated within a three-minute walk. With its own little booths, it is a nice place to sit, especially if you fancied going to do a number of pubs in a very short space of time/distance. However, it is the most expensive pint of all those at the top of the hill, and this does hurt it somewhat.

Situated at the top of Ilkeston Road, The Organ Grinder runs pub quizzes every Monday, has a variety of board games free to use, and feels very open. I would imagine it is a great place to have a relaxed social or meet-up, but the price of a pint is not quite that at the bottom of the hill.

The big winner here is the Rose & Crown, scoring a near-perfect 9.5/10. £1.15 for a pint is unprecedented, so if you’re after a pint between 8-11pm on a weeknight, the R&C is the smart choice. In terms of consistent value, look no further than The Three Wheatsheaves, with its £2 pints of Foster’s or £2.50 for the more premium Kronenbourg.

At the end of the day, and maybe it’s the 12 pints talking, they’re all winners with their own niches and USPs. If you’re in Lenton, you’ll never be too far away from a decent pub.

Artificial Intelligence: a cure or creepy?