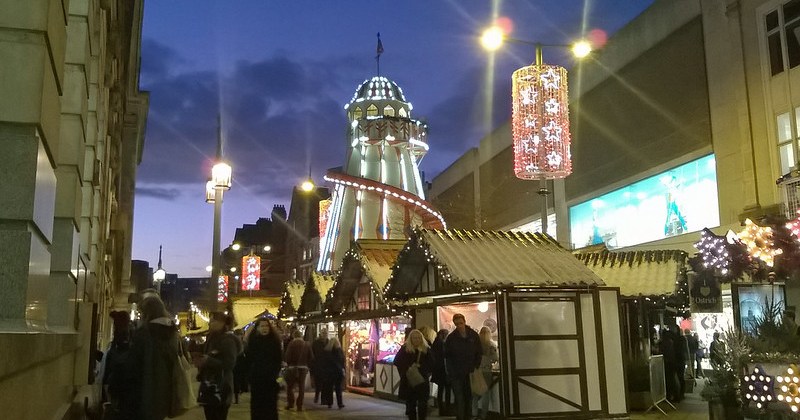 For the past few weeks I’ve been getting increasingly more and more into the festive mood, culminating yesterday whilst loudly singing Christmas songs and writing an essay. I may have just submitted Mariah Carey lyrics on Turnitin, but I don’t care, it’s Christmas!

The Winter Wonderland opened in Nottingham on the 17th of November, the same day as the lights were switched on in town, and it is: So. Dang. Festive. I’m talking giant nutcrackers, a huge tree, ice rink, fairy lights and the most adorable German-style Christmas market!

The second visit was less of a success. Well, I say second visit, but we ended up instead heading home and getting a takeaway, so it wasn’t really a visit. The market stalls close at 6pm according to the website, so we got halfway there and turned around.

“Who knew that meat vaguely labelled ‘Old English Sausage’ could be so delicious?”

But the third visit, oh the third visit! Who knew that meat vaguely labelled ‘Old English Sausage’ could be so delicious? We bought trinkets and browsed stalls which sold things as diverse as gingerbread to baubles. I understand that’s not very diverse sounding, but trust me, there are a lot of varieties of bauble at this market.

The atmosphere at the wonderland is delightful – there are Christmas lights everywhere, live music and lots of fairground rides; although as an adult I decided it would be slightly embarrassing to have a go on the carousel alone. For a fee you can also go inside an ice bar, very Scandinavian and trendy looking, or just go ice skating. I did none of that because I’m a student, and even talking about a trendy ice bar put a dent in my wallet. One of the best additions to the atmosphere, in my opinion, was the appearance of the Salvation Army. They were out carolling at the market, handing out lyrics and putting on a show with some kind of inflatable Santa which didn’t inflate. Safe to say, I love Christmas carols, so I was belting them out to the annoyance of my boyfriend, who apparently now is the pitch police.

The singing was a nice escape from what I can only describe as a pig pen by the bar area – if you want to watch the live band, beware! There’s only one exit from the inner area, which is not fun when it’s blocked by 10,000 buggies. Aside from the stress of a very large crowd, the market is very accessible, with ramps and walkways set out to make the route around it more convenient.

Overall, I had a lot of fun – while it’s not on the scale of the infamous Hyde Park Winter Wonderland, it’s definitely worth a visit this festive season!

Feature image courtesy of It’s No Game via Flickr.com. Image licence found here. No changes made to this image.

Hopes For European Capital Of Culture Crushed By Brexit