The Stories of the Streets photography exhibition tackles both homelessness and perceptions of it to create real change.

Stories of the Streets, a unique photography exhibition which conveys images of homelessness from the perspective of those experiencing it first-hand, has raised £3,500 through product sales and cash donations to support the homeless community. The exhibition was held in the intu Broadmarsh Shopping Centre from Friday 17th November to Sunday 24th December 2017.

People of the Streets CIC is a not-for-profit social enterprise by University of Nottingham students Charles Kerr and Alex Greenhalgh, which aims to tackle homelessness by offering a range of different product packs which are then distributed to homeless shelters across the UK and onto the homeless, to directly benefit their lives. Stories of the Streets has been put together by the organisation with support from Kodak and Boots.

One of the images from the exhibition, entitled ‘£100 for a friend’.

In a time of the year when most of us remain bundled up cosily, basking in the warmth of our homes rather than braving the bitter cold outside, the plight of the less fortunate become even worse than usual. In November 2017, the charity Shelter reported that over 300,000 people – equivalent to one in every 200 people – are either sleeping rough or in inadequate housing in the UK.

With the help of local homeless centres Emmanuel House and Canaan Trust, volunteers from the homeless community were provided with a personal disposable camera, allowing them to capture glimpses of their world and share them with others. The exhibition attracted thousands of visitors, and alongside the money raised, many of them also donated vital necessities like warm clothing and toiletries. 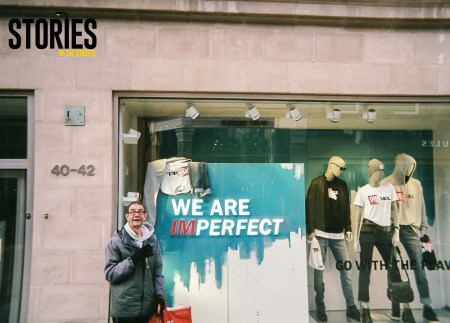 ‘We are imperfect’, a photograph from the exhibition.

Operations Director of Stories of the Streets Alex says, “We’re over the moon and humbled by the response Stories has received in Nottingham. The sales from the photos and calendars have greatly exceeded original expectations; a testament to the talents of the photographers that took part. Now onto Stories of the Streets, Manchester.”

Charles, Managing Director for the social enterprise, adds, “Raising so much money to fund essential items and services is amazing, of course, but it’s also hugely important to us to challenge negative perceptions of homelessness. So many people have taken time out of their busy schedules to visit the exhibition and educate themselves about the reality of homeless living. Hundreds of them have left behind thought-provoking messages of support.” 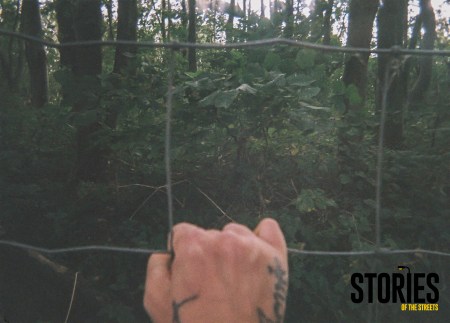 This photo, entitled ‘Fence’, was taken by a homeless photographer as part of the Stories of the Streets exhibition.

All proceeds will be split between the artists through a pay-it-forward scheme, such as secure accommodation or meals for the individual, and re-invested back into the social enterprise to support more people and exhibitions across the UK, with the next exhibition set to take place in Manchester. A 2018 calendar showcasing a selection of the best photos is available to purchase for a reduced price of £5 at peopleofthestreets.co.uk, as are some framed photographs.

Kevin Curtis, Director of Canaan Trust, sums it all up, “For the first time the homeless in Nottingham have been seen to be real people with real issues, transcending the normal, narrow negative stereotyping relating to alcohol and drug abuse. These University of Nottingham students have excelled themselves in delivering for the homeless and for the exhibition partner agencies.”

Further details of the event can be found in the Features section of the next print edition of Impact magazine (no.250), available for free around campus.

Featured image and article images courtesy of People of the Streets.