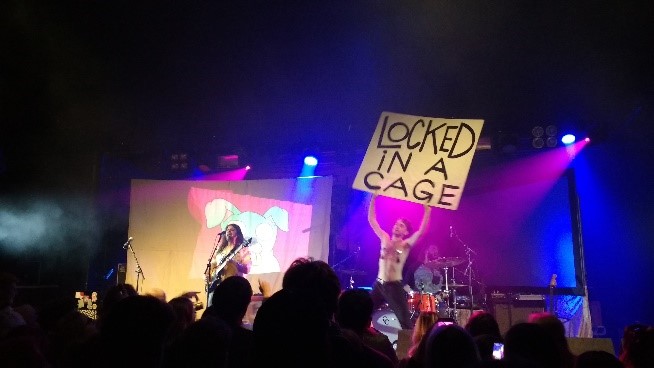 American indie rock band The Front Bottoms graced the stage at Rock city once again to spread the joy of their sixth studio album Going Grey (2017). Joined by supporting acts Brick + Mortar and The Smith Street Band, the high energy, witty lyrics and unique sounds throughout each performance made for a truly unforgettable night.

It’s not every day that you walk into a room to be greeted by a pair of blue, giant inflatable hands waving at the gathering crowd. Crazy antics like this seem to be perfectly normal for the indie rock duo, who have been making a big impact so far on their first ever European tour.

The band’s music, with a mixture of electronic samples and catchy choruses, makes it interesting enough to captivate an audience’s attention, but the presence of the band’s “visual guy” Ritchie Brown really leaves a lasting impression. The use of multiple props and visual cues, such as the “Locked in a Cage” sign (which is for sale on the band’s PledgeMusic page) held by Brown during the song of the same name whilst he danced around the stage wearing nipple tassels, added to the euphoric absurdity of the band’s music. 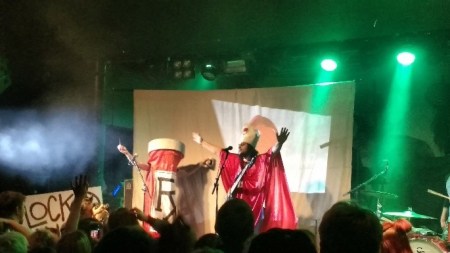 There was a complete costume change for the song ‘One Little Pill’ – a song which sums up the band’s message about overcoming the depressing aspects of life through a celebration of the ridiculous. Brown putting stickers in the shape of pills on the foreheads of audience members whilst dressed as a giant pill bottle was really effective at bringing the message of the song to life. This created a spectacle which nobody who was present will forget anytime soon.

The Smith Street Band had a more simplistic approach to their staging. Whilst the minimal use of visual elements did bring the focus onto the band’s music, the reliance on just coloured lights did make the performance seem underwhelming – paling in comparison to the psychedelic images of dancing cartoon characters that Brick + Mortar had in the background during the final song of their set: ‘Saturday Night’.

Nevertheless, The Smith Street Band continued the carefree vibe of the night, opening with the popular track ‘Death to the Lads’ from their latest album More Scared of You Than You Are of Me (2017). Their setlist included a fairly even mixture of old and new songs, with classics like ‘Young Drunk’ giving their most loyal fans plenty to sing along to. Finishing on the song ‘Throw Me in the River’ from their 2014 album of the same name seemed like an odd choice, as the slower tempo and somber tone almost completely contrasted the feeling of the rest of their set. 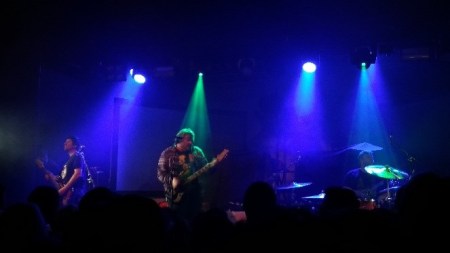 Walking onto the stage to the ocean sounds featured at the start of the band’s newest album Going Grey, the excitement of the crowd was palpable. They waited for the lights to brighten and for The Front Bottoms to go into their first track of the night ‘You Used To Say (Holy F***)’ which sounded as good as (if not better) live than it does on the album.

With a clear, energetic sound, and the ability to smoothly transition from their newer tracks to feelgood classics like the hit ‘HELP’ from their fifth album Back On Top (2015) it is clear why this band’s success has been rapidly increasing ever since their formation back in 2007.

The fact that The Front Bottoms have played in Nottingham many times before created a welcoming atmosphere inside the venue, which was heightened by the warm orange lighting during the opening song.

A strong sense of familiarity and community was carried across the whole performance, with vocalist Brian Sella regularly interacting with the audience by checking in on various parts of the crowd, commenting on the increasing stickiness of the floor and chugging his drink in response to chants. Sella even paused in between ‘The Plan (F*** Jobs)’ and ‘Maps’ to get the audience to sing happy birthday to someone, demonstrating just how friendly the atmosphere in rock city was during the set.

The band left the stage after playing their most famous song ‘Twin Size Mattress’, which was met with the expected high energy, excitable response of the audience singing and crowd surfing, before The Front Bottoms made a dramatic and rather sudden exit. After waiting for the excitement in the crowd to build up once more, the screens onstage showed the band backstage, where Brian Sella kissed the camera before coming back on for an encore of three songs.

“Most of them had a full, polished sound”

The encore started with a rendition of ‘Twelve Feet Deep’, which gradually developed from just Sella on the acoustic guitar, to a trumpet accompaniment and eventually the full band, bringing the performance back up to the energy experienced before the original end of the gig. In some places, the breakdowns and extra effects provided at the end of songs seemed a little excessive, but overall most of them had a full, polished sound which is difficult to achieve in a live performance. 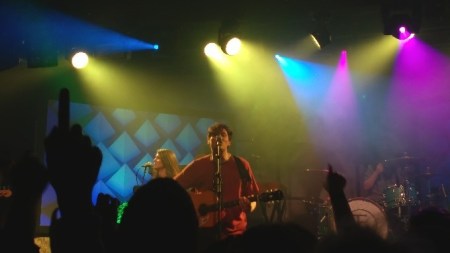 The band walked off to the same ocean sounds that were played at the beginning, creating a satisfying sense of resolution. The sense of theatricality throughout the performance with the dimming of the lights between each song, was completed by the rolling credits playing on the screens onstage as the crowd finally began to leave.

Each of the artists maintained an over-arching atmosphere of euphoria, with engaging visual cues and the discussion of the trivialities of everyday life within their lyrics creating a euphoric release for the entire crowd. These bands create a positive feeling that you do not want to miss experiencing.

The strike debate – which side are you on?