After being thrashed 5-0 on Tuesday, Newport County has got something to prove when they host Notts County at Rodney Parade. Their opponents come to the game on the back off a victory against Carlisle, but they are still fourth in the league and need every point they can get to try and secure their hopes of promotion.

Newport County’s last three league games have resulted in defeat, but Tuesday’s 5-0 loss to Mansfield must have been a real kick in the teeth. Newport have had FA Cup success reaching the fourth round and taking Tottenham to a replay, giving the League Two side a chance to show their worth under the lights at Wembley. Doing so might have caused them to become distracted from their league efforts, however. Although they lost 2-0, manager Mike Flynn said he was the proudest manager in the country, and that the run generated about £900,000 for the club. Nevertheless, Newport have slipped from being firmly in the play-off places in January to them currently sitting in twelfth position. After Tuesday’s devastating defeat, Flynn said that “it is the first time this season they’ve let themselves down like that”, but that “it will be the last time”. Newport will want to bounce back after this poor run of form and letting five goals in must have shaken these players up. 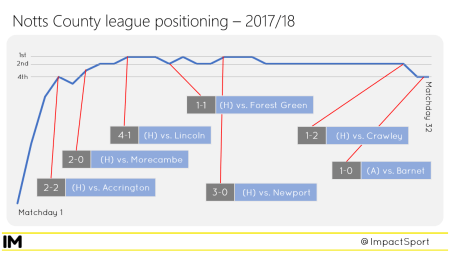 Notts County also have had turbulent form of late, but are hoping Tuesday’s win against Carlisle will be the start of a better run. After a fairly devastating 1-0 loss away to Barnet on 10th February, County returned to Meadow Lane with something to prove, and they performed. They were extremely solid in the first half with Jon Stead scoring a brace, whilst great defensive work allowed County to be 2-0 up by the end of the first half. The second half was a bit more shaky, with Carlisle scoring in the 75th minute after extended periods of pressure. Carlisle had some good chances but County defended well to claim a 2-1 victory at the end of the 90 minutes. After the game, manager Kevin Nolan said that the lads were absolutely terrific and he hoped the team could keep building on the aspects of the game that pleased him. Looking forward to Saturday’s clash against Newport, Nolan stressed that it’s going to be a tough game but Newport have weaknesses that he thinks County can exploit.

With three points and the luck of other results going their way, 4th placed County can make it back into the automatic promotion places this weekend. Despite their poor run of form and mid-table stance, Newport are only six points outside the play-off places. They will be eager to get back on track themselves and look to extend County’ run of no clean sheets in  720 minutes of football. Newport offer an example of sorts to County, in that they show just how costly a dip in form can be to your league positioning. With the play-off chasing pack in League 2 so tight points-wise, failure to recover form can cause a team to plummet. County have the chance to escape such pressure this weekend to build on the Carlisle win and regain their familiar position in the auto-spots – they won’t get the luxury of many more chances to do so should they drop points, however.

Arts Investigates: Is Opera Relatable to Everyone?