The skater, who trains at Nottingham’s National Ice Centre alongside featured Impact #250 interviewee Jack Burrows, entered the Olympic Games in South Korea with such high hopes of finally getting a gold medal. After becoming the first British woman to win gold at the World Short Track Speed Skating Championships in the 1500m and the 1000m as well as a fourth-place finish in the 500m, the first non-Asian skater to win the women’s world title in 23 years, the pressure was on Elise to come home with a medal.

For the 500m Christie set two Olympic records, first in her heat which was then beaten Choi Min-Jeong by 0.002 seconds, and again in her quarter-final race with a time of 42.703 which got beaten by Choi Min-Jeong for a second time in her quarter-final race. Either way, her fighting spirit and determination was there for the world to see. However, as Van Kerkhof’s skate clipped her hand in the final of the 500m Christie was left in a disappointing fourth place, again success had slipped from her grip in an unfortunate manner. Nonetheless, Christie put this behind her for her 1500m short track event.

“Christie fought on competing in the race only three days later”

A collision with Li Jinyu on the final corner of her 1500m semi-final again tainted her hopes of a medal and resembled the disappointment felt at Sochi only four years earlier. An ankle injury in this collision also nearly put her participation for the 1000m event at risk, being advised not to skate due to ligament damage in her ankle. Yet Christie fought on competing in the race only three days later, however, the race had to be restarted due to Christie falling on the first corner. Despite finishing second, she was disqualified for two illegal collisions. Being carried off the ice by her coach concluded her games – another heartbreaking and disastrous Olympics for the British star. 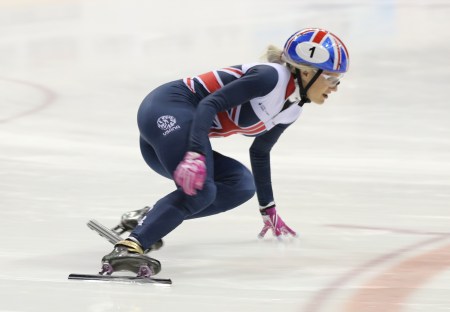 Christie in an interview stated, ‘I don’t know how I got a yellow card. I have never had one in my life. I went up the inside and I passed the girl. I have no idea.’ The ISU (The International Skating Union) state that acts of impeding another skater are, ‘blocking, charging, or pushing another Skater with any part of the body. Interfere with another Skater by crossing his/her course thereby causing contact.’ However, at the high speed that the skaters race at these rules prove hard to fulfil. Christie sadly fell on the negative side of them. She was given a yellow card after the race, which as the ISU rules state; ‘If an infringement of the Racing Rules is deemed by the Referee to be an unsafe, harmful or hazardous offense, a yellow card will be shown to the infringing Skater. The Skater/Relay Team will be disqualified in the relevant race in which the infringement occurred and excluded from participating in the next round of the distance concerned’.

For the 1000m it was clear Christie was in pain, her disqualification after finishing the race with ligament damage seems extremely harsh but her courage should not be dismissed for even attempting the event. But what happened in the 500m and 1500m races? Christie took a massive risk in her 1500m short track event, on the final corner pushing for the gold medal. She said ‘I was so focused on the gold [in the 1500m] that maybe I did make some bad judgement calls’. Her judgement to overtake Li Jinyu on the outside ultimately led her to lose the race.

But can we blame her? Her desire and desperation to succeed was clear, and she needed to finish in the top two in order to qualify. She shouldn’t have let herself be put in the position to push so hard right at the end of the race for a top-two finish, but that’s sport. The lack of luck comes with the injury that followed; an injury which damaged her for her third and final event. Christie further showed her frustration, albeit in a sophisticated manner, stating, “It’s just literally the worst coincidence in the planet. As everyone says, you couldn’t have scripted it – it’s coincidence.”

“Sadly it wasn’t to be for the Scottish star”

It seems that Christie could not have done anything more to achieve at the games. Her decision making could have been better, but ultimately luck simply was not in her favour, with the rules being so difficult to follow at speeds of up to 30 miles per hour. Collisions and errors will occur in the sport, it is a combination of skill and luck which defines the game as human error will undoubtedly happen under the slippery and competitive circumstances. This was clear in Christie’s 500m event, unfortunately falling under contact with Van Kerkhof. By pushing for a medal place the skaters risk this kind of ending by overtaking, and sadly it wasn’t to be for the Scottish star. The positive to take from this is that Christie will carry on to compete in Beijing 2022 claiming, ‘I owe it to short track’ to continue. Her determination despite the agonizing failure to earn a medal in both Sochi and Pyeongchang is extremely admirable, but we’ll have to wait four years to find out if this pays off finally for the Nottingham-based skater.