Behind the Scenes at NNT – Black Comedy

NNT gives Impact another being the scenes preview of their new hilarious show, Black Comedy, written by Peter Shaffer
0 March 16, 2018 14:34 by Matthew Johnson 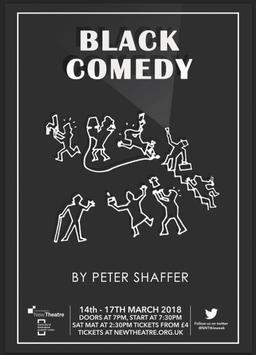 The first comedy of the in-house season at Nottingham New Theatre, Black Comedy is set to be a hilarious and exhilarating show. Written by Peter Shaffer, it is a one-act farcical play, centring around the antics of Brindsley Miller, who steals his neighbour’s elaborate furniture in a desperate attempt to impress the father of his fiancé and an art collector named Georg Bamberger. When the fuse in his apartment is blown, the characters descend into chaos, fumbling around in the darkness. Ahead of their first performance, Impact spoke to director, Louis Djalili and two cast members, Lois Baglin (playing Carol Melkett) and Hugo Minta (playing Colonel Melkett) to discuss their experiences so far.

First-time director Djalili was keen to stage and direct this eccentric play as “I really love comedy and there were some great comedies last term, so I wanted to make sure there was more in my final term at the New Theatre”.

Djalili has enjoyed having “the power” in his directing role, compared with his past experiences of acting. Being a third-year student “I knew basically everyone in the cast, and some of them were already my friends, so I had a solid foundation and it was nice just to get cracking”.

“There’s a lot more physicality to it and it takes a lot more energy. You need big reactions, big facial expressions and grand gestures”

Baglin explained that “I’ve never really done comedy before and I wanted to try it. When I went to the auditions I really liked the script and it made me chuckle, so I thought I hope I can make other people chuckle”.

“I usually do naturalistic or realist plays, so this was a lot different to what I’m used to. There’s a lot more physicality to it and it takes a lot more energy. You need big reactions, big facial expressions and big gestures”.

Like Baglin, Minta also described how he is used to performing Shakespearean tragedies and dramas at NNT, so all three members of the team have tried something new with this play.

Minta was drawn to the “fun stock characters and the bizarre scenario of the play. The complications just keep coming and coming, which adds to the comedy of it all. It’s just this huge menagerie”.

“It’s been very challenging, you need high amounts of energy to sustain yourself and it is knackering at the end of the day. But it’s enjoyable as well, and you get a lot of room to play with the characters and make them as wild as you want”.

The play is staged under a reversed lighting scheme, it begins in darkness and once there is the short-circuit, the lights come on and the actors have to pretend to be plunged into darkness. Djalili expressed how to get used to being in darkness and how to convey it, the cast “played lots of games near the beginning where we would turn all the lights off in the studio and make an adventure course for us to walk through”.

“Recently, we’ve been playing a game called find the hand, where you basically turn off the lights and I go around taking cast members’ hands and putting them together and they have to guess whose hand it is”.

Despite Baglin’s fear of the dark and the “staggering” number of bruises that Minta has acquired from trawling through rehearsals in the dark, it is an interesting concept that only adds to the humour of the plot.

Baglin commented on the rehearsal process, saying it has been “really fun, I’ve made lots of friends and rekindled some friendships. There’s been a lot of space for improv, so while Louis has been directing, it’s been quite an open space. We’ve been able to put in our own ideas and create some raw moments that we all came up with together”.

Additionally, Minta recognises that “Louis has always been there to help us realise our potential. It’s been quite intense because it’s a very physical style of theatre. Also, it’s been a quick turnaround since auditions, but 100% worth it”.

As the play is a farce, Djalili hopes to achieve “controlled chaos, rather than complete chaos”.  Since the team have moved into the theatre set to rehearse, they have focused on using the props to make things “slick”.

When asked to sum up the play in three words, Minta chose “chaotic, unique and hysterical”. Baglin went with “adventurous, lively and like nothing else you’ve seen before” (which she admitted was cheating), and according to Djalili, it’s “manic, witty and ambitious”. So, with those descriptions in mind, Black Comedy isn’t one to be missed.