Cash “looking forward” to next season under Karanka

Midfielder Matty Cash says Nottingham Forest have a big future under Aitor Karanka, and the pair spoke recently about how the remaining games of the current campaign can be used to build a strong promotion challenge in 2018/19.

Speaking ahead of Saturday’s trip to face play-off chasing Sheffield United, Cash spoke about the qualities of the new boss, who has overseen an impressive turnaround since his tricky start at the club.

“He’s a fantastic manager, everyone knows it. We’re doing well at the moment and we’ve got a big future at this club under Karanka. We’re looking forward to what next season is going to bring us.”

Cash, who has played across various positions in the starting-XI since graduating from the academy, looks to have finally cemented a place as the first-choice on the right hand side of the attack. He is showing both style and a directness that at such a young age could set him up to be one of Forest’s big stars next year, but the 20-year-old shed light on what his manager had said about the nature of his new position, and how he can contribute to the team going forward:

“The gaffer says if I drift to the left I can stay on the left, or if I drift in midfield. So it’s a sort of free role where I can try and score goals and create goals.”

“Before the QPR game the gaffer said to me, “listen Cashy, just keep trying to score. My main focus for you now is to add goals to your game.”

What a feeling getting my first goal for forest! Dream come true! Fantastic result too ??? #nffc pic.twitter.com/AswbjGTEzg

That would be the weekend where Cash would begin his goal scoring career, netting against QPR and following up with his first home goal against Birmingham. With new signing Ashkan Dejagah expected to have his season confined to just 14 debut minutes, Cash has the opportunity to convince Karanka that he should remain first choice on the right side of the attack.

Karanka spoke about the contributions of fellow youngster Ben Brereton, who continues to lead the line for Forest at just 18 years of age, noting how confidence is vital for more experienced players, but especially those at the beginning of their career:

“We were speaking about Foxy; if a veteran players needs confidence, imagine a young player. The only way to build confidence is to give them the opportunity.”

“He needs to be more aggressive, stronger, but he is 18 years old. He is learning a lot.” 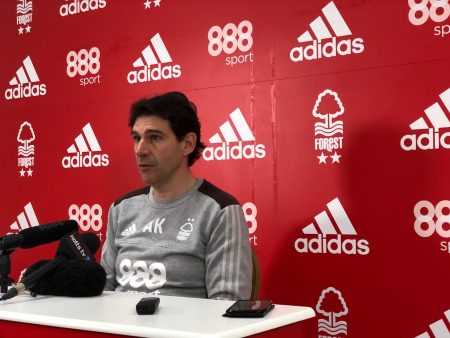 With just nine games left, the manager touched on how his squad was fairing physically. Major injuries have not blighted Forest this season as they have so often in the recent past, but many new signings are beginning to feel the strain on their bodies – with an international break approaching in a timely manner:

“With this international break we can have that rest. I can feel that the players are really really tired. As I said before, the players that came here [in January] had not played before. For them to play four/five games in two weeks, you can feel they are tired physically and mentally.”

“I had a chat with the players on the training ground”, Karanka said. “They are surprised that they are running less than they had in the past. They are more organised, they are more confident”. The boss had previously explained how he is not concerned about how far players run, but about how they run, and whether it is in the “right direction” and at the right moments.

“I see the Derby manager said that was our last big game of the season. It’s not really, not at all.”

He will have to manage his squad well physically in the remaining games, as the boss looks to build the foundations to a more meaningful season in the next campaign. Speaking on Forest’s previous outing, at home to rivals Derby County, the boss noted how the 0-0 result, whilst slightly frustrating to some, demonstrated what significant progress the team had made since he first sat in the dugout:

“It was the game I was expecting. Everyone had told me how important that game was for our crowd.”

“It is another example that we are going in the right direction, it is different to when I came here. We have to keep going, to show them that they can be proud of this team.”

Whilst Cash also echoed what his manager had been stating before the derby, that it marked one of many important games as the Reds look to continue their progress into the next season:

“I see the Derby manager said that was our last big game of the season. It’s not really, not at all. We’re playing for a massive club and we’ve got to play to win and to start off something for next season.”

Forest travel to Bramall Lane on Saturday, home to Sheffield United who possess the third strongest home record in the Championship this season. The Blades are in an especially strong run there, winning four of their last five games. Whilst their away form has seen them perhaps struggle to keep hold of a top-six place, Forest’s record on the road has not been too much more impressive. They are undefeated in six, however, and with progress being made each time Karanka’s side step out the tunnel and little promotion or relegation pressure on their shoulders, a season double against Sheffield United would sit well with a boss whose focus is to try to win every game and make as much progress ahead of the next campaign.