Students in support of the UCU lecturer strikes are currently occupying a hallway in Trent Building to voice six demands for the University.

The occupation started at 9am with approximately 10 protesters. Later on, as more students joined in, the number of supporters doubled. The protesters are also active on social media, where they are currently releasing their six demands via videos on the UoN Student-Staff Solidarity Occupation Facebook page.

Impact spoke to one of the organisers of the protest action and Chair of the Left Society, Declan Burns.

“This was largely organised as a joint venture between the Left Society and Socialist Students with a few other people that we’ve just picked up on the picket line who believe that staff deserve decent pension,” Declan told Impact. 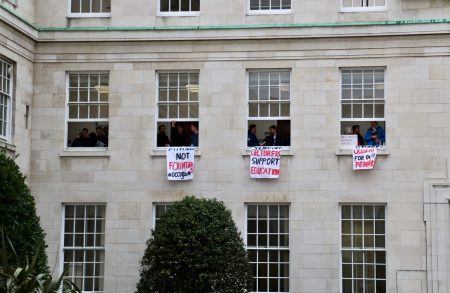 He said the protest was going well and people were not reluctant to join in:

“We’ve been playing some music, we’ve been chanting, doing a few speeches, working on social media, but the main thing is the fact that we are occupying physical space on University. We’re saying this is a space for solidarity, and it’s being reclaimed.”

Declan noted that although most staff were not on campus due to the strikes, the protesters had received “lots of grateful messages on social media.”

“We’ve been playing some music, we’ve been chanting, doing a few speeches”

The demands shared on social media are: 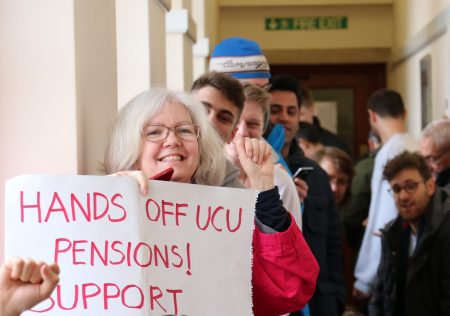 At the moment, the demands are only circulating on social media, but the protesters plan to officially submit them to management. Declan elaborated: “Security have said they will take up demands to management if we want, so we will submit something formally at some point.”

Dining out on a budget – Nottingham’s five best set menus

“Officers have a lot more voice than students think they do”: Interview with SU Activities Officer Martin Nguyen