Nils gives us a glimpse into what we can expect next from the Potter spin-off series... 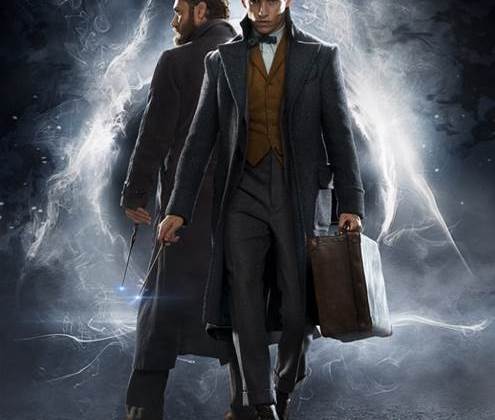 2016’s Fantastic Beasts brilliantly resurrected the Potter universe by turning the clocks back almost 100 years to give us a completely new perspective on a wizarding world that was larger and more magical than ever. Again penned solely by J.K Rowling and directed by Potter regular David Yates, the teaser trailer for the next instalment in the Potter prequel series, Fantastic Beasts: The Crimes of Grindelwald, has finally been released.

The biggest talking point perhaps comes in the first few seconds of the new trailer, sweeping past rolling hills and a glistening lake to reveal a very familiar sight. That’s right, a movie or so following the final battle in its iconic grounds, it looks as though will be heading back to the gates of Hogwarts, albeit a hundred or so years earlier.

“This is the future headmaster as we’ve never seen him before – the man has style!”

Pretty much the entirety of the first Fantastic Beasts film took place in New York – which was an awesomely innovative way to enrich a story that for seven long books unravelled solely in select patches of contemporary England. However, a little sprinkle of the magic of the original series this time around would certainly not go a miss!

Speaking of a return to the Potter era, the trailer delivered our first glimpse of Jude Law as Dumbledore. Suave and sophisticated, with a two-piece waistcoat and an uncharacteristically well-groomed mane, this is the future headmaster as we’ve never seen him before – the man has style!

“As hoped plenty of favourites from the first movie return”

Narrative-wise the trailer suggests pretty much what we already knew, that Newt (with Eddie Redmayne looking as generally confused as ever) and Dumbledore will be teaming up against Dumbledore’s one-time bff and psychotic dark wizard, Gellert Grindlewald, played this time out by Johnny Depp of whom we are treated one shot of throughout the trailer and boy does he look…grey? Whilst the guy looks positively ghostlike, he appeared aptly unnerving and it was, I suppose, at least a step up from the blonde on blonde lip moustache action Depp had going on at the end of the first one…

As hoped, plenty of favourites from the first movie return, with Tina, Queenie and Jacob (whose memory seems very much intact all of a sudden!?) all featured fleetingly in the trailer, as well as the brooding and seriously messed up Credence, who destroyed half of New York in the first movie, brilliantly played by Ezra Miller aka. Justice League’s The Flash.

Equally a host of newer faces are thrown in too, including Zoe Kravitz as Newt’s former love interest, Leta Lestrange as well as her husband and Newt’s brother, Theseus Scamander, played by Callum Turner.

“…preparing us for the final legendary battle between Dumbledore and Grindelwald”

Altogether, this movie looks like it will build on from the first in a big way, all the while preparing us for the final legendary battle between Dumbledore and Grindelwald that is still probably some way off.

Premiering 16 November 2018, do not miss the latest installment in fantastic Potter prequel series!

Six things university has taught me outside of my degree