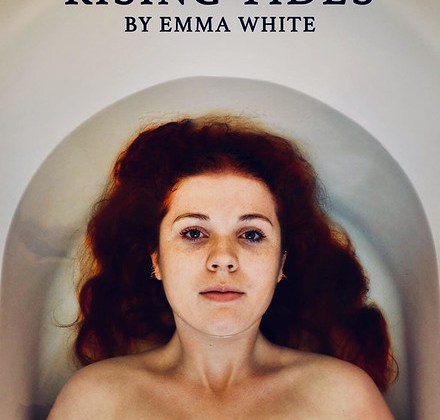 A thought-provoking and stimulating story of a world in which climate change has forced all of humanity to change how they live, Rising Tides by Emma White rises highest when it focuses on the personal relationships borne out on stage. Despite the play’s setting, a near-future Earth where climate change has led to forced black-outs and the banning of non-essential products, it is when the four interlinked characters come together that the play comes to the fore.

The story focuses on Steph (Daniella Finch), a 21-year old who finds herself increasingly disenchanted with having to live with the sanctions of mistakes made by the generation before her, epitomised by her father, Ryan (Arnaud Lacey). The play opens with a monologue by Steph, with Finch’s presence on stage, which helps to pull the whole performance together, evident from the start.

The loneliness and isolation caused by black-outs and energy cuts is epitomised early on in the performance by Laura’s (Niamh Caines) touching monologue about not needing to look good considering she never leaves the house. It is a stark indication of how even something as natural as going outside, when taken away, can have such a physical and psychological importance.

“A very sharp production, rounded out the four-strong cast, who played off of each other very effectively”

The first half of the performance is dominated by monologues, which, whilst performed with energy and vigour for the most part, began to feel slightly strained in terms of its power. This was a minor drawback which was removed once the play began to focus more on character interaction. The introduction of Tim (Ian Sheard), a politician whose role in the later revelations about missing people is one of the best moments in a very sharp production, rounded out the four-strong cast, who played off of each other very effectively, and led by Finch’s enchanting power.

The best moments of the play, on the whole, came through the revelations about the personal relationships between the characters. Steph’s argument with her father, Ryan, about Ryan disapproving of her desire to have a child, is juxtaposed with his own conflict with Laura about her wish for a child of her own, despite her being a step-mother to Steph.

“If the cautionary message of the plot was not clear before this, it was hammered home”

Ryan’s aspersions against Steph having a child stem in no small part from the ‘energy’ that having a child will take up; if the cautionary message of the plot was not clear before this, it was hammered home.

Such difficult themes are handled with panache and set the tone for when it is revealed that, to help meet energy quotas, the government had taken the decision to snatch people. Tim’s revelation about his complicity in the decision hits home, and Sheard’s powerful monologue, showcasing the pressures of government in such a turbulent time, is a brilliant piece of individual theatre.

The small cast was supported incredibly by the lighting and sound team throughout the performance. With the stage set out in-the-round, and LED lights in a square shape setting out the stage, Natalia Gonzales and Joanne Blunt (Sound), Sam Osborne (Lighting) and Darcey Graham (Technical Director) used a range of special effects to illustrate the tension and emotion of the performance.

That this is a play written by Emma White makes its sharp tone and direction even more impressive. If there were any mistakes in terms of script or delivery, there were lost on this reviewer. Despite the heavy tone, and the shocking revelations that dominated the second act of the play, it was hard to walk away from the show with a smile on my face, debating with other audience members as to which part was our favourite.