From Rags to Witches: the Grim Tale of Children’s Stories at Lakeside Arts

Ever wondered if there was something more to the childhood stories you grew up with? Lauren takes us on a tour through Lakeside Art’s latest exhibit!
0 July 21, 2018 23:36 by Esther Kearney

Walking into the Weston Gallery feels like you’ve become Red Riding Hood and strayed into the woodland. The lights are dimmed to preserve the antiquated books on display, yet the witches’ silhouettes on the walls evoke a sense of mystery. Much like the darkened room, the fairy tales we grew up with have eerie origins. 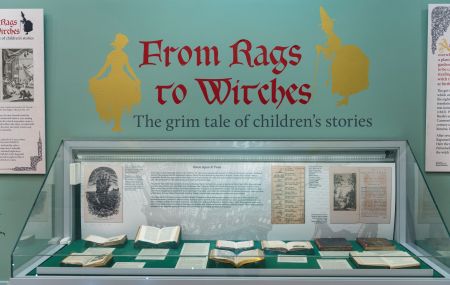 This exhibition, curated by Manuscripts and Special Collections, features a plethora of fairy tales and children’s literature, tracing their development across history to the present day. Each display cabinet contains documents encapsulating a specific aspect or key historical period in the development of children’s stories. The depth of social, historical and cultural information surrounding the display pieces makes for an informative exhibition.

From twentieth-century manuscripts and Victorian children’s literature, to modern film versions of fairy tales, From Rags to Witches also explores the prevalence of children’s stories in Western culture. Along the walls are boards displaying the origins of familiar fairy tales, including Snow White, Cinderella and Rapunzel. Gory details, long forgotten in modern retellings, are noted and the depth of information regarding these tales is enhanced by illustrations from their early editions.

I liked that the exhibition not only looked at fairy tales in previous centuries, but recognised how these stories continue to be popular today, displaying modern adaptations, including Hollywood and Disney retellings, along with Angela Carter’s The Bloody Chamber and Roald Dahl’s Revolting Rhymes. 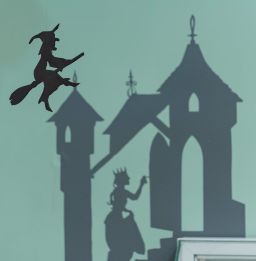 Viewing children’s stories and early editions of fairy tales, often centuries old, brings the stories they contain to life. Alongside books by the Brothers Grimm, Hans Christian Andersen and Charles Perrault, the exhibition contains lesser-known contemporaries. I discovered the works of Giambattista Basile, whose collection The Pentamerone was the first to contain only fairy tales.

Historically, children’s literature has been more than simply for entertainment. The additional purposes of children’s literature are illustrated through the books on display. From warnings of damnation to educational stories instructing the Victorian middle-class child, I discovered that many cultural values are encoded within fairy tales and children’s stories. I particularly liked the display of literature from the Victorian era, as the array of books indicated the rich variance of stories available for children and their underlying messages on race, class and gender. 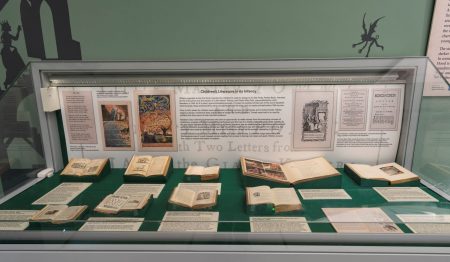 Whilst collecting fairy tales and children’s stories across time and from different cultures, the exhibition also displays global and local literature. This includes a Japanese retelling of Snow White and manuscripts and illustrations selected from artists in the Nottingham area- notably Kate Greenaway, whose name is used for the prestigious Kate Greenaway Award given to thebest-illustrated story each year.

If you love your fairy tales or wish to uncover a hidden side to children’s stories, then this engaging exhibition is well worth a visit. From Rags to Witches: the Grim Tale of Children’s Stories is on display in the Weston Gallery at Lakeside Arts until Sunday 26th August.

All images courtesy of Manuscripts and Special Collections, The University of Nottingham.