Having seen four-piece indie rock/pop band Pale Waves perform at two festivals this summer, Dot to Dot Festival and Y Not Festival, I was very excited for the release of their debut album My Mind Makes Noises. Manchester born and bred, Pale Waves have frequently been compared to The 1975, who also share the same record label, Dirty Hit. 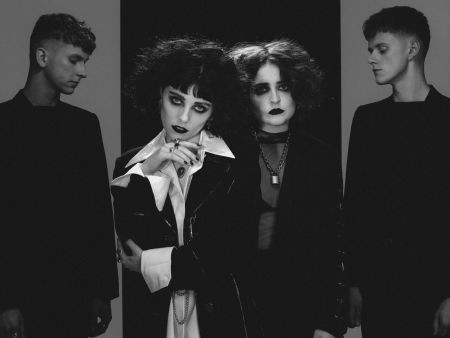 After the release of their highly successful EP All The Things I Never Said earlier this year, their album has been highly anticipated by fans. With crowd-pleasing singles like ‘Kiss’, ‘Television Romance’ and ‘There’s A Honey’ as well as a whole host of brand new tracks, I’m certain that fans will not be disappointed. Whilst I also anticipate the album enticing many new listeners.

Kicking off the record is ‘Eighteen’, an indie-pop banger that is bound to get you moving. Infectious and full of energy, Pale Waves start how they mean to go on. Another incredibly catchy song is ‘Came In Close’, with simplistic lyrics and electronica influences, this one embraces their classic feel-good sound. Speaking in an interview with NME, lead singer Heather Baron-Gracie has stated that “our image doesn’t exactly represent the way our music sounds”. When hearing their deliciously sweet pop-inspired songs, listeners may be surprised by the band’s ‘gothy’ appearance. Don’t judge a book by its cover, folks.

Despite only forming in 2014, the band already have a distinctive sound, with piercingly good vocals from Baron-Gracie. Accompanied by Ciara Doran on the drums, both women take the dual roles of performers and songwriters. In a genre of music heavily dominated by men, it is very refreshing to have two female band members at the forefront of Pale Waves, alongside guitarist Hugo Silvani and bassist Charlie Wood.

Pale Waves are known for their honest song writing, taking a reflective stance on subjects of love, relationships and mental health. In contrast with their sugar-sweet melodies, they don’t sugar coat when it comes to talking about real issues, focusing on what it’s like to be young. This is particularly prominent in the song ‘Noises’, where Baron-Gracie contemplates “I’m afraid that I need help”, with echoing lyrics adding to the sense of confusion and disillusionment.

From utter bliss to heartbreak, this album has a song for every mood. Showing their softer, more vulnerable side with melancholic tracks like ‘When Did I Lose It All’ and ‘She’, the band discuss lost love. Although ‘She’ is not a special standout for me, I appreciate the effort to do something a bit different, slowing down the pace for more ballad-like emotion.

The album reaches its close with a beautifully heart-felt acoustic track, ‘Karl’. Again, this song shows another side of the band, writing poignantly about grief. The album showcases their ability to be more diverse in their music, fusing features of indie, pop, rock and electronica together to create something truly memorable and unique. In terms of criticisms I have very few. However, I was slightly underwhelmed by ‘Loveless Girl’ and ‘Black’, which I found more forgettable compared to the high standard of the rest of the record.

After a huge year of releasing new music and touring throughout the UK and the US, I have high hopes of a long and bright career ahead of Pale Waves, following in the footsteps of their peers The 1975. My Mind Makes Noises is one of my favourite albums of the year so far, which is pretty impressive considering how many great indie albums have been released in 2018, including those from the likes of The Wombats, Fickle Friends and The Vaccines. It is an album I can and will listen to over and over again until I know every beat and lyric, being added straight to my Spotify summer playlist.

My Mind Makes Noises will be released on Friday 14th September.

You can also catch the band performing at Nottingham’s Rock City on Monday 1st October.