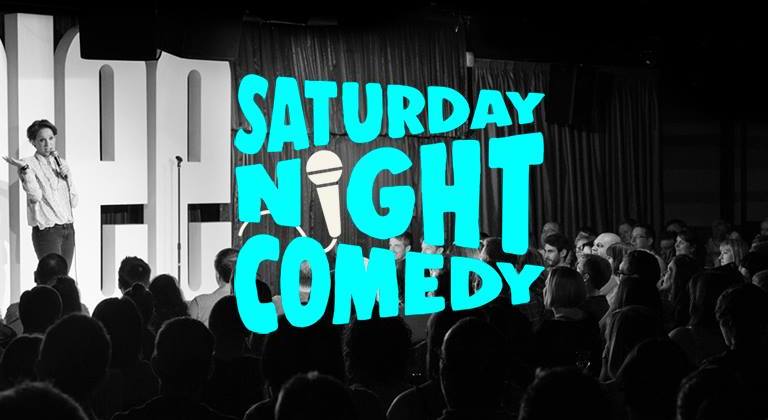 Having visited the Glee Club a handful of times already, I went in knowing what to expect and excited that I was in for a fun night. Hosted by comedian Marc Olver, the all-male line-up was followed by three other comics including, Adam Hiss, Ian Coppinger and Mark Nelson. A dazzling mix of confidence, talent and self-deprecation saw the audience laugh louder and the comics involve us more, particularly targeting those few brave souls in the front row. This was, by far, an evening that exceeded my already high expectations.

Forty-five minutes before the show began, the floor was filled with a buzz as drinks began flowing, chatter became louder, and pizzas were being ordered. Settling on the classic Malibu and orange, along with a good ol’ piri piri pizza, I glanced around to take note of that particular audience. Already clocking both a hen party and somebody’s 71st birthday group (alongside the usual couples and friends), I knew this comedy night would have an edge to it.

Silently relieved that I wasn’t seated at the tables near the stage, I admired those that were, for they were, of course, central elements to many of the jokes throughout the night. With no warm up acts, the Comp Marc Olver jumped right into things with off-the-cuff comments and improv comedy which was the perfect way to get those instant laughs. Clearly confident in his craft, Olver owned the stage and had no trouble generating casual yet effective jokes, often based on audience participation.

All of the comics seemed to be aware of the others’ performances which showed that they had been watching and listening to their peers. This proved well for the overall act as it meant that they played on previous jokes, so it felt like a smooth performance. It allowed the four different comics to transfer easily rather than it feeling like four separate and disconnected performances. This was the main element that made this particular show feel different to the many others I have seen at the Glee Club.

Ian Coppinger, in particular, did a fantastic job of basing his set on the audience in the room. Not only did he play on Olver’s comments with the hen party crowd but elongated the length of a joke. In a different comedy club, this may have felt as if the joke was going on for too long, however, Coppinger had a way of escalating the joke further and further until one is doubled over in laughter. He did this so well that it seemed somewhat strange when he dove back into some rehearsed material – he had the crowd hooked without it.

Both Adam Hiss and Mark Nelson were refreshingly quick-witted and told many relatable jokes with a huge scope of sexual innuendos that all ages could enjoy. What struck me most about their stage presence and talent was the authentic way they handled the broad age range and diversity in the crowd. One comic went through the years people in the room had been born, starting with me who is 20 years old, going through those born in the 80s, 70s, 60s, 50s, and there was even one gentleman who was born in the 40s! This truly encapsulates the charm that is the Glee Club as anyone and everyone is able to sit in a room and simply enjoy laughter together.

The delivery of the lines was impeccable and there didn’t seem to be any moments when I wasn’t laughing (unless I was enjoying the brilliant array of food they have to offer). From the frank topic that women say men with beards are sexy, but in fact mean sexy men with beards are sexy, to proclaiming that a woman’s job title of ‘Laboratory Chemical Assistant’ actually means she is a ‘sh*t shifter’, it seemed that everyone was left with tears of laughter long after the delivery of each joke.

At one point the sound technician started the music slightly too early but this did not prevent the comic from making a true moment of the spectacle either. The music generally was proved effective in keeping people entertained during the two breaks.

Overall, the show was unlike other shows I have been to: what I had expected had been prevalent but heightened to the next level. I urge anyone to go and visit this wonderful venue and their outstanding comics, just don’t sit in the front row if, like me, you are embarrassed easily!

Best Places to Spend your Meal Card on Campus