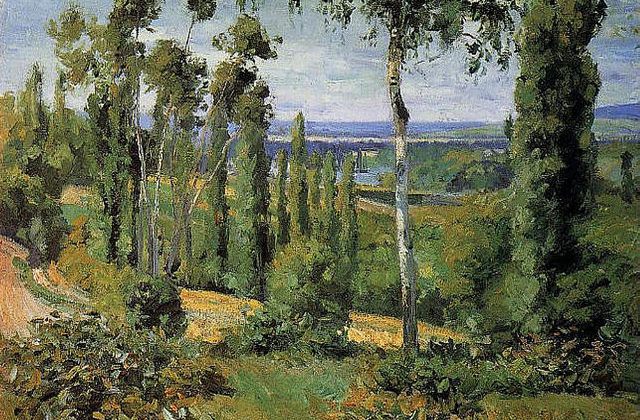 The morning was bright and pale yellow like fainting buttercups, casting a welcoming tint over his home. He lived in a country village, small and peaceful, but not quite isolated. The only sounds he heard were bird song, the tractors in the fields and the persistent, whirring motors of lawnmowers. He woke and spent most of the day reading in the garden.

In those strange hours between the afternoon and the evening, where people travel home-wards and the world reverts to its passive state, he decided to walk. His village was not note-worthy to the unfamiliar eye, but to him it was blessed with beauty. It belonged at the foot of a hill and was centred around a tranquil pond. A winding road led into a valley studded with firs, where deer and badgers roamed. An ancient, weathered church oversaw a stream where bits of broken china drifted down.

He climbed that hill, and as he rose, higher up above the earth, it was not long before he saw the fields and the vast curves of the river that was the pride of his county. This concrete road was surrounded by green on either side, but the world opened up behind him and he continually looked to intake the view.

It had been a strange couple of days, he thought to himself. The month had been gloriously, and at times, terribly, hot – but the previous night the skies had opened and stormed with a fury. It had grown dark, first, and the clouds had a reddish tinge. The winds blew, bending trees and swinging windows open, while the rain fell and the sky rumbled. He had sensed a cataclysmic change, but whether it was the beginning of something or the end he didn’t know.

At the top of the hill he stopped and leaned on a fence, looking at his surroundings. The warmth of the morning had dissipated, and now the lands were wreathed in mist, like Avalon. The distant fields became grey and the trees protecting their borders were black clumps, coal amongst smoke.

It was then, as he rested, that he saw a giant, but from that hill, it seemed like a God. It came from the ground near the river. The flat plains, fertile and wet, crumbled away as first a toe and then a foot the size of a Gothic mansion broke through the earth. A fist punched its way upwards and became a hand with fingers large as trees and strong as steel. Enormous palms were placed on the ground and a colossal skull emerged.

The giant’s skin had a greyish-brown hue like rust or bone. It was difficult to discern its features, as it was not fully human in appearance. It seemed, instead, like the landscape itself. He attributed a countenance to it like a child sees eyes in a tree trunk or a nose on a rock-face. It’s very being was primordial.

The once tranquil country was disturbed like an ants’ nest as soon as the giant stood up. The river which had flowed and defined its own course for hundreds of years poured into the crater that was once the giant’s tomb, or perhaps it was a place of hibernation.

At its height, the giant loomed over the landscape. It was impossible to ignore, and he stared in fear. It disturbed his very belief in the world before him. No lessons that he had learned could possibly have prepared him for this sight.

The giant had stepped into the river, flooding the shorelines, train-tracks, and roads. Yet, something appeared wrong with it. It moved with a limp and its arm seemed disconnected from its torso. As soon as it left its burial place, it began to vanish. Its skin turned to dust, floating into the wind and darkening the skies, leaving only a skeletal frame. Before long, these bones melted into a copious, thick sludge.

The remains of the giant filled the very void it had left. The mists resettled and, aside from the disturbed witnesses, scurrying to and fro, the landscape returned to its tranquil state. It was as if a silent cancer had been cut out of the earth, but he felt, also, a certain sadness. The giant had been terrifying, yes, and so far above himself – it was a raw act of nature – yet, it was also sublime.

He wondered how he would ever be believed. People would think he and all the witnesses were mad, and he felt that the rest of his life would be spent preaching his story to uncomprehending ears. But he would know, he would always know. The giant’s last act was an effort to deny the ages and to go on remembered, so he would carry its legacy.

Nottingham Poets: Psst! at the Jamcafe