Creative Corner: What the Robin Saw

Frankie Denton uses his powers of the imagination to conjure up an eerie and unearthly tale this Halloween... 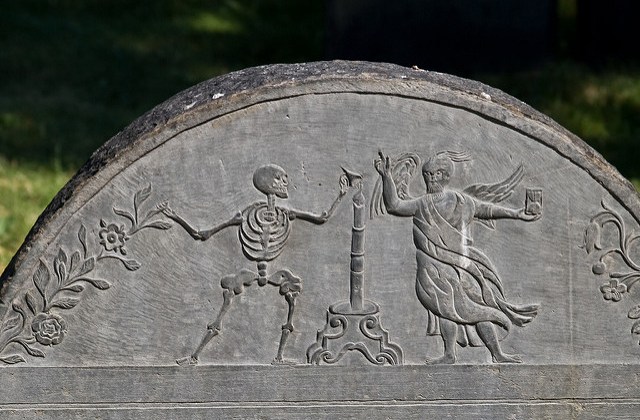 At the end of October-month skeletons dance on the graves of our mothers and fathers. They rise to the call of the night and bring out their buried fiddles to play a jig. Only Red Jack Robin, little Jack they call him who perches on the branches of the ash, will dare tell you what horrors the undead commit. His heart beats in his chest, a miniature pumping vessel, and he stares from his beady eyes into the darkening gloom.

The red-breasted Robin – heart and soul of the English countryside – is our purveyor of stories, yet he demands a price. Three wriggling pink worms will do, find them where you will. If you approach him with his bounty, don’t be afraid, for he will not startle. He is weary and hardened, he who stands out in the tundra like a drop of blood on cotton. He has bested wolves and guided crimson-cloaked girls through the silent conglomeration of pines.

So listen, when he begins his tale of the dead.

He clears his throat, ruffles his feathers. His voice is potent with a heady rural tone.

‘Old Balthazar,’ he begins, ‘old Balthazar was the first to stick his bony feelers up and break from his earthly kingdom. Crack went the hard ground as his knobbly noggin emerged, and crack went his great-granddaughter’s vase of lovely chrysanthemums which he disturbed in his awakening haste.

‘Who knows why he decided to rise at last? He’d certainly had a long enough rest. 1851, he died. 1851! Whatever his provocation, he was an inspiration – a guiding light of calcium and collagen. Skeletons are like sheep, they follow the herd, though they can’t be herded. Soon Ofelia was up, and Juliet too, twin sisters you see, and Hadrien and the timely beardless Bill, the sailor’s son who never partook of the ocean due to a fear of salt.

‘They gathered in a five-pointed circle, grinning with what few teeth remained between them. Henry plucked away at the strings of an old violin, grating the bow in an explicitly unmusical fashion. Thunder rumbled like cascading timpani and the flute-winds joined. Sole-less feet began to tap and shortly the whole lot of them were cavorting in a merry carnival. Yet the air shivered with a cold and mystic energy and I noticed my cousins had flown away to find more tender branches. Cowards, I cried, though I forgave them in my heart.

‘The ritual was brief and furious and finished in a flurry, but the dead weren’t done. Old Hades placed his violin by his tombstone and they marched two by two by one to the gate where a fainted wedding bouquet lies, you can see it now. They passed through the boundary with dark intent, emerging not as skeletons nor corpses but full-fledged human beings! The saggy skins they once wore having materialized, they were ready to invade the green and gracious land we call home.’

Here Jack Robin stops and breathes a low whistle. Poor Robin, the friend of man, our dear narrator. So very tired was he.

‘Only the silver shadow of the moon highlighted their ascent until they passed below the golden street-lamp on yonder corner. You can gold-plate many a thing but not corpses. Their skin clung to their bones like poorly-placed rouge on the zany jester’s cheeks. An unnatural blight, I rather wished they would have forgone their costumes to walk among us. As it was, in the black evening air they were almost indistinguishable, perhaps, from an especially downtrodden pensioner come to dote on their trick-or-treating progeny. And there be dragons! The guileless citizen knew not what was approaching them in their hunt for sweet and salty treasure.

‘The skeleton crew prowled the paths of this village on All Hallows’ Eve and who could possibly have stopped them? They moved with a tormented determination – now they were up and off they would make use of their limbs! It was not long before they approached their first victim – or so I thought. A little boy lost in the village green. I watched from the bushes with bated breath.

‘They strode towards him with malicious intent, yet as they reached the child whose strong and lively bones were sure to be taken for spare parts, they carried on upon their way. Marched right past him, into the murky waters of the pond where sleeping ducks lie. Surely, they hadn’t risen for a mere scrub of the feet? The twins led the way and when all five had entered Poseidon’s domain they fell face-forward with a tremendous splash! The boy, who meanwhile was watching, transfixed with confusion, began to cry which drew the attention of his mother at last.

‘Civil society intervened and there was many a cry as, it was believed, five escaped OAPs had gone quackers and dived into the pond. Watching from my perch, I willed the sensible adults not to overturn their unmoving bodies, lest they reveal a new-found horror. What they did discover, in fact, was the smooth and wrinkly faces of their elders, whose mud-balm had taken a century off their fizzogs. They were brought blankets and hot tea, though no salty-biscuits for Bill, and soon were adopted, leaving poor me to a night of fitful sleep.

‘In the morning, I returned to that graveyard which, I fear, will always have an unwelcome place in my mind’s hearth. The ground was undug and smooth, with a crop of green, green grass, and I blinked my eyes, wondering if I had eaten too many sour berries. But by midday I heard from a drifting pheasant that he, too, had seen the dead rise, the un-miracle, call it what you will, in a land over that hill there. It seemed this was no isolated incident, and now the gaunt Victorians are among us once more. They live in our homes and roam our paths, unidentifiable, indistinguishable.

‘So now only you, and I, and my mute brothers and sisters know the truth. That we have been infiltrated by the dead. So, keep your wits about you, for their mission is uncertain. Love? We can hope. Disaster? More likely.’

With a wink of the eye, Red Robin slurps his final worm, before tip-tapping from branch to branch and disappearing into the gathering gloom. The graveyard is silent once more but, at times, the crack of a snapped finger-bone can be heard when treading amongst the ancient undergrowth.

The Changing Nature of Horror Games