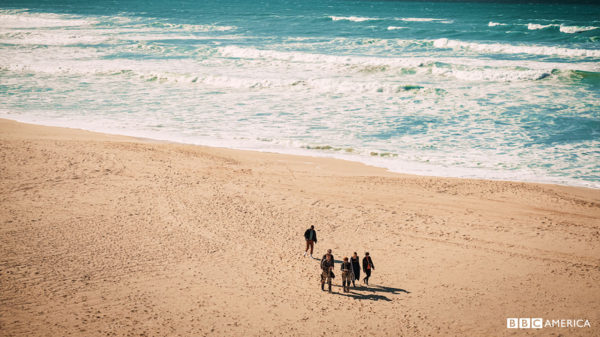 This brief yet action-packed trailer immediately plunges the viewer into a new adventure. Picking up from episode one’s cliffhanger ending in which the Doctor and her companions are transported deep into space, the trailer opens with them on a desert terrain planet. How they got there is unclear, as there is no TARDIS in sight, yet the spaceship in the background suggests that they’re not alone.

In contrast to the comparable setting of Sheffield, England in the first episode, episode two features a distinctly alien planet and unfamiliar uniformed figures.

“the new Doctor is as quick-witted as ever…there may be tension between her and these uniformed figures.”

We then see the three companions taking in their surroundings, overlaid with the Doctor instructing them not to touch anything. Considering the Doctor has always had a comic habit of breaking rules and fiddling with things, there may be an irony to this line.

However, the trailer does not show the companions’ response to the Doctor’s instruction. Instead, another scene follows, involving a new character, possibly part of the crew from the spaceship shown in the opening of the trailer. He appears defiant towards rules, whilst the Doctor’s quip ‘Did you practice those lines in the mirror?’ suggests that the new Doctor is as quick-witted as ever, and that there may be tension between her and these uniformed figures.

With the first episode sparking controversy over whether Jodie Whittaker’s 13th Doctor is merely a mix of previous Doctors, hopefully this second episode will allow Whittaker to really make the Doctor her own.

The trailer ends with the Doctor promising to keep the companions alive and get them back home. It is clear that the Doctor’s sympathy towards humans is ever present. Yet the trailer also suggests that the 13th Doctor is particularly energetic and inquisitive, as this dialogue is overlaid with clips of the Doctor ducking shots, climbing through a hole to explore, and running from sparks.

“there are two instances of the Doctor being shot at in the trailer, perhaps implying that this series features higher stakes”

Interestingly, of the three new companions, only Yaz speaks in the trailer, angrily telling the Doctor: ‘We’re about to die!’

Ryan and Graham are rather absent from the trailer, suggesting this episode will focus on the dynamic between the female protagonists. Considering Yaz’s background as a sidelined police officer, this dynamic could be explored further in the course of the series. Particularly if the doctor proves a mentor figure for Yaz, or perhaps even a source of antagonism.

As the trailer predominantly focuses on the dynamic between characters, this may be the main focus of the episode, rather than the alien enemy. All we see in the trailer is a brief glimpse of hooded figures in black shooting at the Doctor and her companions. Yet there are two instances of the Doctor being shot at in the trailer, perhaps implying that this series features higher stakes and more threatening enemies than previously.

This short yet fast-paced trailer seems to promise high amounts of tension and energy for the new series of Doctor Who.