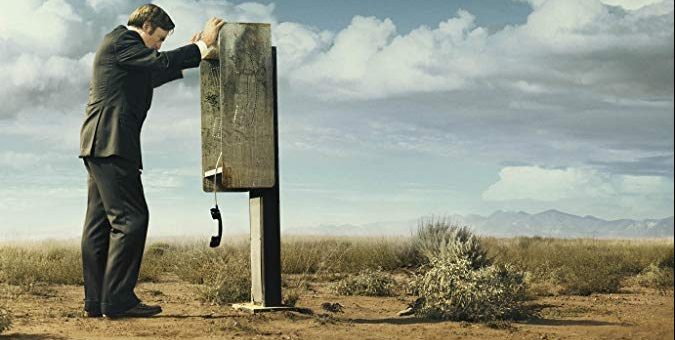 Reeling from the shocking climax of Season Three, the latest instalment of the Breaking Bad prequel consistently hits – and very often succeeds – the lofty heights of its acclaimed predecessor.

If that description reveals anything, it would be that this instalment concerns itself with descent. Indeed, for Jimmy and Mike to reach the characters famed for their appearances in Breaking Bad, some considerable moral decay would need to take place. And that is what makes Season Four in particular so investing. Knowing the pre-determined fate of each character, and seeing the path that they each take to reach this, mean that it’s a devastatingly addictive watch.

Creators Vince Gilligan and Peter Gould are well-practiced in showcasing revolutionary character arcs from their work on Walter White, but with Better Call Saul it’s undeniably crueler. We know exactly where Jimmy is heading, and seeing his descent becomes all the more heartbreaking the closer he gets to Saul Goodman.

“Despite intersecting only briefly, both plot lines remain equally compelling”

In terms of the plot, comparatively little occurs in terms of major ground-shaking events. But that’s not to say it’s ever a less-than-exciting watch. Although noticeably darker in tone than its earlier series, there are frequent moments of (occasionally surreal) levity. Jimmy, in his search “gainful employment”, slips back into the more criminal world, while Kim’s life and career truly starts to take off.

The parallels of their relationship are played out wonderfully, demonstrated most clearly in a superbly-directed montage at the beginning of the seventh episode. As for Mike, his story-line more clearly resembles the world of Breaking Bad, and as a result sees well-remembered characters – Gus, Hector, the Cousins – play a more vital role. As such, Season Four showcases a program of two halves. And this is certainly not a bad thing – despite intersecting only briefly, both plot lines remain equally compelling.

What sets this aside from other drama series of its kind is the way in which the story is told. As ever in Better Call Saul, the importance is in what’s not said just as much as in what is. Every decision paints itself across the actors faces, and the directors have no fear of drawing out unconventionally-long silences. The New Mexico setting reinforces the theme of a modern-day western, and the action scenes – although sparse – are tightly choreographed and offer a welcome shift in tone from the emotional weight of the main plot.

As well as relying on a wide selection of Breaking Bad characters (from brief cameos to major players), the show also sees new figures emerge onto the scene. The most prominent of these included German engineer Werner Ziegler, who develops a unique dynamic developing with Mike and offers a fascinating arc for the pair. Nacho’s story is also graced by the arrival of the effortlessly charismatic and subtly terrifying Lalo Salamanca, who will no doubt rise to even greater prominence in subsequent series.

“The finest acting comes from Bob Odenkirk and Rhea Seehorn”

As for the performances of the main cast, there is not a single weak link. Howard, although having much less to do this time around, sells each of his scenes by convincingly displays his inner struggles. Nacho, meanwhile, is put in a truly frightening situation for the fourth season, and deftly ventures into previously unexplored depths to his character. Giancarlo Esposito remains the master of terrifying silences, and is given a weightier role this season to display greater depth to Gus.

Jonathan Banks also sees a welcome return to form (after his somewhat lacklustre storyline in Season Three), with Mike having some truly stand-out scenes on multiple occasions. But the finest acting comes from Bob Odenkirk and Rhea Seehorn. Kim is left as one of the show’s moral compass, and the pressure that this places on her – as well as witnessing Jimmy’s steady transformation – is handled with absolute skill. As for Jimmy, the subtly that goes into each and every one of his scenes is unreal. It’s heartbreaking to know where he will end up, but to see the tragedy portrayed in such intimate detail by Odenkirk’s superlative calibre of acting makes it impossible to stop watching.

“The writing is finer than ever”

Better Call Saul has delivered its best chapter yet. The writing is finer than ever, with consistently high-class acting, and an emotional gut-punch of a final scene, the show has finally delved into territory that leaves even Breaking Bad in the dust.