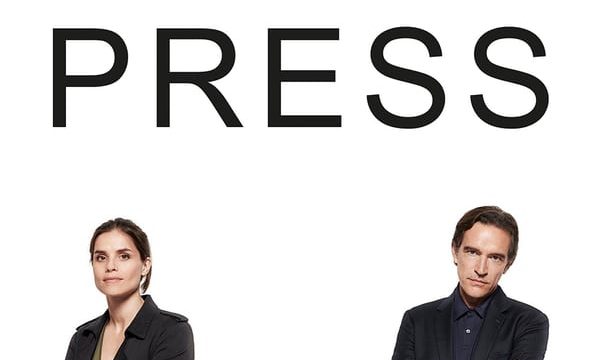 With a premise less centred on cramming our screens with blood-spill and gore than the adjacently aired Bodyguard and Killing Eve, there was always a danger that BBC’s Press would float modestly under the radar. However, writer Mike Bartlett’s latest attempt, a drama absorbing itself in the unremitting world of journalism, lays on the action thick and fast, providing entertainment more than stout enough to validate the six-part series’ status amongst the Autumn heavyweights.

Press follows the trials and tribulations of two national newspapers as they compete for headlines like warring factions. With their headquarters separated by a single London square on a fanciful Fleet Street, The Herald on one side harbours intentions of exposing worldly wrongdoings with some cutting-edge, liberal journalism. Whilst across the road, tabloid newspaper The Post is more preoccupied in the business of littering its front page with eye-catching, often brutal headlines, willing to obtain a story by any means necessary.

“The drama unravels like a captivating sprint to the finish line”

Bartlett therefore pitches good against bad: The Herald versus The Post; or, quite transparently, The Guardian versus The Sun. And with The Post’s merciless editor Duncan Allen (Ben Chaplin) always one step ahead as he looks out from his gleaming office window towards the decrepit home of the comparatively ailing broadsheet, the drama unravels like a captivating sprint to the finish line as the stakes grow higher and higher.

The writer imprints his style heavily through the characterisation in this series. Perhaps in response to criticisms over the excessively melodramatic nature of his otherwise acclaimed 2015 series Doctor Foster, Bartlett portrays an industry almost entirely devoid of emotion. Chaplin revels in the role of illuminating the thoroughly villainous nature of Duncan Allen, a former journalist who has become as cut-throat to his wife as he has to the subjects of his headlines. The actor’s unerring performance is aided by a clever touch of pathetic fallacy to intimately depict Allen’s struggle as the rain begins to fall on his personal life.

“Despite her unmistakable talent for finding a story, it is hard to warm to a woman who fails to break into a smile”

Equally stone-hearted is Charlotte Riley’s portrayal of The Herald’s female protagonist, Deputy News Editor Holly Evans. Despite her unmistakable talent for finding a story, it is hard to warm to a woman who fails to break into a smile once during six hours of television and would sooner go out for dinner with her laptop and a pile of unread emails than one of her four or so friends.

The characterisation of the drama’s lead figures is therefore best described as one of caricature. The upshot of this far from flattering representation of the profession is that it has inevitably angered a fair few real-life journalists, and it is no wonder that they have been queuing up in their numbers to slam Bartlett’s creation.

Indeed, some of their issues with this drama are entirely within reason, for Bartlett’s presentation of the industry is dated and bordering-on lazy. Particularly out-of-date in his illustrations are the persistence of institutional misogyny, inaccuracies over staffing levels, and the obsession with the front page at the almost complete expense of the websites that dominate modern media reporting. Therefore, whilst Bartlett and his team have clearly done their research, it appears to have been extracted entirely from retired veterans of the business, revealing insider information over the phone whilst sipping on champagne in a holiday villa in La Rochelle.

Despite these faults, taken purely as a piece of fiction, Press is first class. The plot meanders its way along high-speed tracks towards a breathless finale that leaves everything on a knife-edge, momentum built so high that viewers across the country will be left drooling for a second series.

Home Run: Hull Is Where the Heart Is