Behind the Scenes at NNT: ‘Dr Faustus’ by Christopher Marlowe, adapted by Daniel McVey 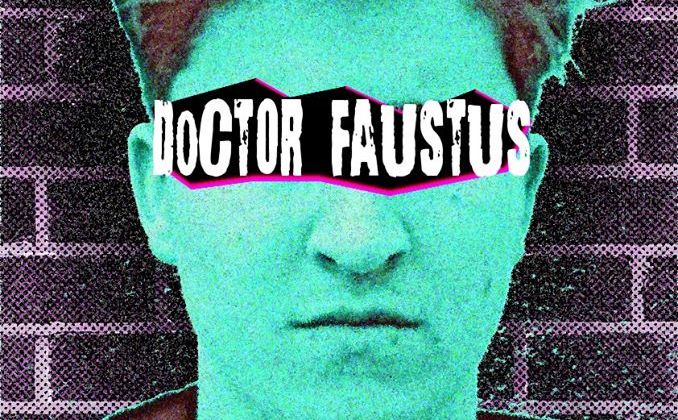 As this year’s fantastic NNT season continues to get better and better, we once again went behind the scenes to talk about the next performance, this time: Doctor Faustus, adapted by Director Daniel McVey.

Already a fan of Marlowe’s well-known Doctor Faustus, when I heard that our very own NNT was staging its own adaptation, I knew I had to go behind the scenes to take a look, and brilliant Director Daniel McVey was lovely enough to welcome me along to rehearsals.

Though there was only Dan, Morgan Beale (Faustus), and Grace Williams (Mephistopheles) within the huge rehearsal space, there was an immediately fantastic atmosphere to the room – before rehearsals began, we all enjoyed playing around with the acoustics of the Great Hall (not to mention the fabulously slippery floor – I promise we were all adults and did not spend a good few minutes debating sliding as far as we could across the room.) 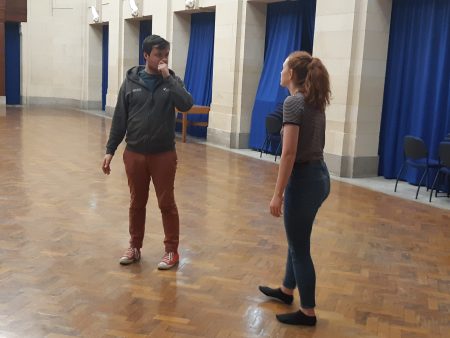 With such a jovial atmosphere, I felt less like an interviewer imposing upon this close-knit rehearsals, but instead a welcome member of this brilliantly close group.

Yet when rehearsals began, the atmosphere immediately changed – the change from the jovial dispositions to that of the focused actors almost caught me off guard with the intensity and power displayed by both Grace and Morgan – it wasn’t difficult to see why they’d been cast, both fit their roles fabulously. Though not the finished production, I was amazed by how immediately captivated I was by their performance, how easily drawn in by their fantastic delivery and passion behind their characters.

I felt less like an interviewer imposing upon this close-knit rehearsals, but instead a welcome member of this brilliantly close group.

But this upcoming production will not only rely on its fantastic acting, as Dan promptly told me this is a very “tech heavy production, very reliant on heavy lighting, strong and diverse sound effects and sound design, and we’ve also got video design in it so it will really come alive when the lights are added to it I think, and that’s something I’m very excited to do” but of course, being such a tech heavy production, it has also proven very challenging for everyone involved.

“It’s challenging for the actors with it being sort of disparate until we’re in that space, until those lights go on it, it’s challenging for me as a director cause I’m not sure what it’s gonna look like until we’ve got all of the elements together and it’s certainly been challenging for our techies” – he continued, noting how “the annotated script I sent to Sam [Osborne – Lighting Designer] I’m pretty sure had over 200 suggestions on it of cues and that’s only for lights” – ‘challenging’ might be an understatement… 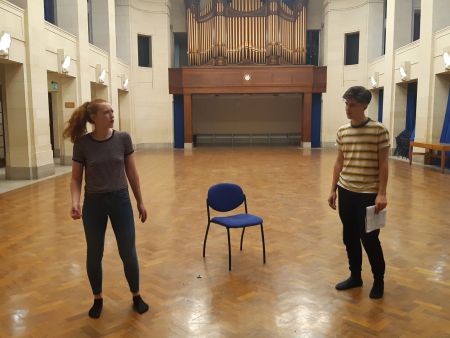 But what was so lovely to see was the complete faith the group displayed in the techies.

Grace: “we’ve got a good, as in experienced, fast, tech team”

Dan: “I’ve got complete faith in them, I also know that they are as excited as we all are to put it together”.

Grace: “it’s basically you saying, you like tech right? Do you wanna do all of it in one show – and they’re like, uh-huh, yes please.”

Grace: “– and the pyrotechnics at the end…”

Dan: “we have not got pyrotechnics!” (laughs)

Dan told me how the whole production has been a very collaborative process, and having witnessed such fantastic chemistry as this, I’m not surprised. (though I am sad to hear there are no pyrotechnics).

It wasn’t difficult to see why they’d been cast, both fit their roles fabulously.

But it’s not just tech that makes this such a big production, as Dan told me, “this is the biggest cast of the season, by quite a way” – with numerous cast members who multi-role as both the seven deadly sins and other characters.

When asked if this casting choice was more to do pragmatics or meaning, Dan admitted that it was “a combination of the two – I think there is sort of symbolic meaning behind it, but […] I’m very keen not to assign meaning to things, I sort of want to sprinkle the story with meaning so that the audience can create what they want from it – it’s a little bit pretentious.”

It is this sense of sprinkling the story with meaning which seems to be Dan’s main hope for the production. As noted on the NNT website, this is an adaptation of Faustus, rather than a traditional performance, and though many aspects remain the same, Dan noted how his production is “certainly a version of Faustus, it takes Faustus as its root, [but] there are sections which are so far removed from Marlowe’s Faustus […] morality in this [Dan’s adaptation] is so much more grey”

Dan: “the original is very prescriptive in the way it looks at right and wrong, and that’s very much as a  response to the writing conditions and whilst that is fantastic nowadays there’s a lot more difficult to take a black and white look at right and wrong and justice and we’re not a religious country in the way we used to be … so I think taking a more problematic look at all of this makes sense”

One key difference between the original and Dan’s adaptation is Dan’s decision to cast Grace as Mephistopheles. An arguably traditionally ‘male’ role, Dan admitted “having a female Mephistopheles is a non-traditional casting choice. It was cast gender neutral and certainly Grace as a performer is not performing it in a particularly gendered way” 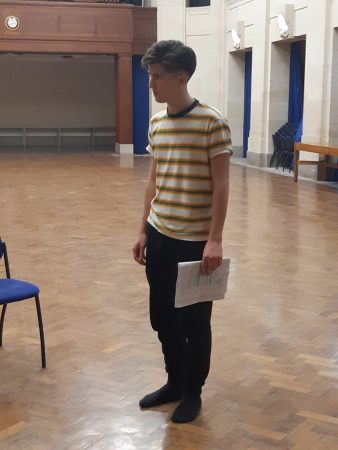 He continued, “there’s definitely an idea that what the characters are seeing is not what the audience is seeing and that sort of questioning the reality of theatre is a big theme in this and something I want people to do,”

This sense of questioning reality does not simply apply to the casting choices however, but also the setting of the time itself. Before Dan arrived, I asked Grace exactly ‘when’ the production is set, and got the hilarious answer of “we’ve been describing it as a bit wibbly wobbly timey wimey” – when I later mentioned this to Dan, he admitted this was “probably an appropriate answer – alongside not having one particular meaning I don’t particularly want to prescribe it a time period, there are references which place it in modern day I think aspects of it are certainly late 20th century, sound design for example and all our marketing is very heavily influenced by punk rock, but certainly if you try to place it in a time period you’re not gonna manage it but again I think that helps to play with the ideas of reality and existence cause it’s not easily placeable in any reality”.

“Morality in this is so much more grey”

Is playing with reality a main aim?

“Very possibly – I think my main aim is make the audience think, [..] I want people to talk about this, and have conversations about the issues and questions that arise from this, and different people will come in with different things that they get out of it, … but I think just sort of audiences in general will have questions after it which I think is a good thing – there are far more questions in this play than there are answers, there’s very very few answers, and that’s not say there isn’t closure, there is closure, there Is sort of an element of finality in the final scene.”

Yet what exactly this ending entails? They naturally couldn’t say – “the ending is a question mark, (does that say too much?)” – No Dan, it doesn’t. If you, like me, have had your interest piqued by this mysterious ‘question mark’ then I guess you’ll just have to grab a ticket and go along to the show.