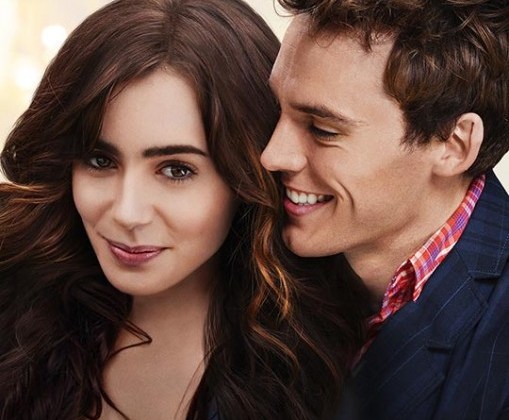 Sometimes life doesn’t go exactly the way you may have planned, and this is something that Love, Rosie explores with great depth and heart. Based on the novel Where Rainbows End by Cecelia Ahern, this charming Rom-com is a mesh of tears, moments that can’t help but prompt a smile and, unlike so many of its washed out contemporaries, actual comedy.

Best friends since childhood, Alex (Sam Claflin) and Rosie (Lily Collins) are two eighteen year-olds with huge plans for their future together – platonically, of course. But one crucial misunderstanding and a bit of bad luck forces them thousands of miles apart. Alex enrols at Harvard medical school and jets off to the States, while Rosie remains in Ireland as a result of a bizarre condom mishap. Despite the various bumps along the way, their friendship endures. Girlfriends, boyfriends, husbands and wives come and go, but it takes almost two hours for the two of them to realise that sometimes, the best thing that’s ever happened to you is sitting there right under your nose.

It’s a storyline so clichéd it’s almost nauseating, but it is pulled off well in this case, with just the right amount of predictability that we can expect a happy ending, but not so formulaic that it becomes a major snooze-fest. On the odd occasion the sheer volume of missed opportunities and terrible, terrible decisions made by both characters does prompt a roll of the eyes, but you’ll still find it impossible to tear yourself away.

Collins in particular shines as Rosie Dunne, portraying a strong minded, slightly dorky young woman who seems to get herself into some of the most awkward – and occasionally relatable – situations imaginable. As a result, we watch her stumbling through life with a few giggles, and plenty of sympathy.

Refreshing in Love, Rosie is the unforced feel of the one-liners and other moderately comedic moments. Of course, it isn’t tear-streaming, rolling around on the floor type humour, but its just the right sort to go with this feel-good kind of film. Of particular notes is Ruby’s admitting to Rosie, “It’s so great having you as a friend. Every time something goes wrong in my life, all I have to do is look at yours and it puts everything into perspective.” The overall script is by no means flawless, but it more than does the job of giving the characters a charm and wholeness that you don’t find in every Rom-com.

It is, however, the tiny issues we notice the most. For a movie adaptation that is meant to be primarily set in Ireland, it is perplexing how many cast members speak with a ‘generic’ British accent. That Rosie’s parents have a very strong Irish lilt and Rosie herself comes off as a London tourist is a very noticeable flaw, and diverts attention from what is otherwise a pleasurable watch.

Aside from this, it is difficult to find flaws in something that seems to endear itself to so many. If you are looking for a flick that is one of the best in its genre, or a truthful adaptation of its source material, you won’t find that here.  What you will find is a one with enough humour, heartfelt moments, and predictability balanced with a few unexpected twists to make it a movie experience you certainly won’t forget in a hurry.

The story of Mrs F: how music therapy can benefit individuals with dementia, one memory at a time