From Television Personality to President: Donald Trump’s impact on music from 2016-2017 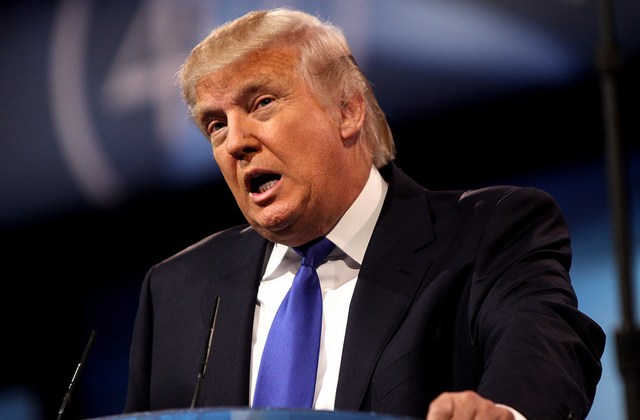 There are three certainties in life. (1) We all eventually die, (2) we all pay taxes at some point and (3) US President Donald Trump will say something so outrageous that the ever-divided world will yet again ask the question as to how he became president. November 8th 2018 will mark two years since Trump unexpectedly beat Hillary Clinton to win the 2016 Presidential Election and yesterday, the US electorate went to the polls again to vote in the Midterm elections.

To say Trump’s administration has been chaotic seems an understatement. His rhetoric has sparked fierce backlash, his ties with Russia are being scrutinised, and his backwards-looking stance to society has engulfed him in issues surrounding sexism, racism and nationalism. The backlash to Trump’s presidency has been consistently documented by the music industry, either in interviews, during live shows, or in the actual music itself.

There’s been a staggering resurgence in protest songs over the past few years addressing the President himself and life in this new America. Below is a timeline of music’s response, and ultimately a playlist, from the beginning of Trump’s candidacy up until the end of 2017 as told by some of the most renowned and respected artists.

Five weeks before the 2016 Election, tensions were heating in America. Just four days after the first Presidential debate, a scathing attack on Trump was issued from an unlikely source. Manchester’s Cabbage were widely regarded as the future for British punk. The highlight of their latest EP though was closing track ‘Free Steven Avery (Wrong America)’, a single which recognised the danger that Trump possesses, explicitly calling him out with lines like “It epitomises everything that’s wrong with America / Death to Donald Trump… / There’s something about politics in America.”

The second Presidential debate on October 9th gave Trump another platform to offer hollow, nonsensical soundbites and US writer Dave Eggers had had enough. Teaming up with a vast collection of artists like Death Cab For Cutie, Moby and Franz Ferdinand, the ’30 Days, 30 Songs’ movement released a politically-charged single every day in the final 30 days before the election.

Whilst some of the singles are purely entertaining for the title alone (‘With Love From Russia; Old Man Trump; Natural Born Loser’), Death Cab for Cutie’s melancholic ‘Million Dollar Loan’ and Franz Ferdinand’s ‘Demagogue’ were the real highlights. Eggers’ movement has since expanded to ‘1000 Days, 1000 Songs’, providing a vast amount of music against the Trump administration.

Dawning of a new age: A Tribe Called Quest – ‘We The People’

Just days after Donald J. Trump became President, one of the most important political tracks in recent memory was released. Legendary hip-hop group A Tribe Called Quest’s ‘We The People’ dived straight into people’s fears of life in Trump’s America, illuminating current societal issues which could only get worse. Rapper Q-Tip’s opening line “We don’t believe you ‘cause we the people” highlights the contentiousness of Trump being elected whilst the rest of the single spirals through police brutality, racism, discrimination, immigration and gender equality.

On the eve of Trump’s inauguration, two powerful reminders were projected by giants in the music world. Canadian indie troupe Arcade Fire teamed up with soul legend Mavis Staples to deliver a straightforward message that power is temporary. Will Butler’s ritualistic chanting adds a haunting quality to lyrics “I give you power, I can take it away” providing a warning to Trump that he won’t have free rein in the White House.

Back in Britain, digital band Gorillaz opted for a more direct attack on Trump. ‘Hallelujah Money’ offers a scathing criticism of the Presidential Election, focusing on the influence of money and race politics. Mercury prize winner Benjamin Clementine’s soft, bewitching vocals add a sense of fantasy whilst lyrics like “And I thought the best way to protect our tree / Is by building walls” look towards Trump’s already contentious policy propositions.

The end of the world: Father John Misty – ‘Pure Comedy’

Former Fleet Foxes drummer Josh Tilman (A.K.A) Father John Misty, released opening single and title track of 2017 record ‘Pure Comedy’ a few days after Trump’s inauguration. Rich in satirical hues and subtle humour, Tilman delicately unravels the inherent disadvantages of humanity. Tackling gender stereotypes, physical imperfection and religion, the track is not itself an anti-Trump song, but closing line “I hate to say it, but each other’s all we got” reflected the situation around the start of Trump’s administration.

The revolution starts to mount: Depeche Mode – ‘Where’s The Revolution?’

Two weeks into office and Trump’s planned Immigration Ban sparked global condemnation. With people still in shock over the new American leader, Dave Gahan’s Depeche Mode returned to music with the first single from fourteenth studio album Spirit. Opening lyrics “You’ve been kept down / You’ve been pushed ‘round / You’ve been lied to…/ Who’s making your decisions” snap sharply through the core of modern America. The Essex synth-rockers are never afraid to touch on politics and the track epitomises the need for revolution.

Opting for a new tone of music, ‘Chained to the Rhythm’ was the first of many tracks which pop star Katy Perry described as “purposeful pop,” stating her desire for “political liberation.” Whilst the catchy, funk-pop beat sways in the background, Perry’s lyrics are sharp, and punish the nativity of the US electorate. The song itself is an addictive piece of bubblegum-pop but the lyrics are scathing, something which Perry should be applauded for.

Another Brick in America’s wall: Roger Waters – ‘Is This the Life We Really Want?’

Pink Floyd legend Roger Waters took twelve years between his fourth and fifth solo studio albums, but when he returned in 2017, he made sure people would talk about it. The title track of his fifth record is an aggressively direct attack on Trump, ripping apart his damaging speeches whilst opening with snippets of Trump’s delusional CNN interview. Lines “Fear keeps us all in line / Fear of all these foreigners / Fear of all their crimes” hits out at the President’s ‘fear factor’ approach on social media. Waters offers an Orwellian take on American society, but the darkness appeals to many groups in Trump’s America.

Donald Trump’s America is constantly under scrutiny from all walks of life, and rightfully so. As shown, his first year in office was considerably criticised, and will be in due course, 2018 offered little respite. As the US Midterm election results come in, America will wait with bated breath to see if their dream of a better America will finally come true, or if Donald Trump’s nationalistic agenda will be set in stone for the next two years.

7 Types Of People You See In Your Lecture Hall

Do you care about BUCS?