Film Review: Back to Berlin 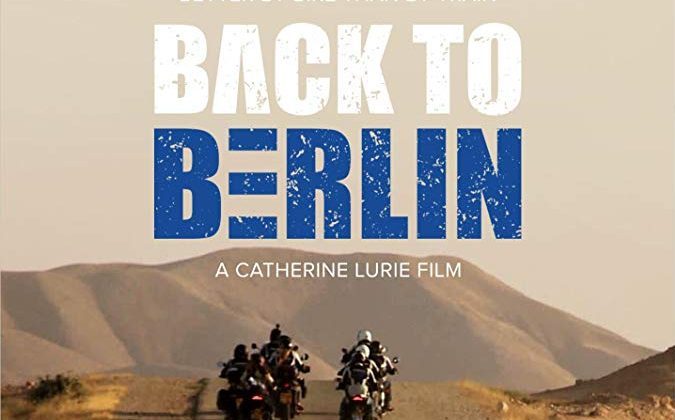 Poignant and purposeful, Back to Berlin is at once both a fascinating and hugely moving work, that quite literally uses its travelling lens to trace and reflect on some of the most chilling moments of Europe’s darkest century.

“In spite of everything, we are here”

These are the words of a Hungarian Rabbi, who, halfway through Back to Berlin welcomes the Maccabiah torch bearers outside his synagogue. Fundamentally his passing words sum up the spirit of the documentary directed by Catherine Lurie, a British born filmmaker of Jewish origin.

The film sees 11 people of Jewish heritage undertaking a 4,500 km journey from Tel-Aviv to Berlin on Motorbike to carry the Maccabiah torch to the Maccabiah Games, a Jewish only sporting event, held in Berlin in 2015. The trip serves as an homage to the journey taken in the early 1930s by 11 Jewish riders spreading the news of the 1st Maccabiah games to Jewish communities all over Europe. The original 11 undertook the journey in a time of rising anti-Semitism on the continent and the rise of Hitler’s Nazi party in Germany, in a decade that would eventually end in the commencement of the Holocaust.

“Stunning cinematography showcases a beautiful Europe in the throws of summer”

Lurie’s use of go-pro footage and stunning cinematography showcases a beautiful Europe in the throws of summer. Yet, the film’s content undercuts its scenic offerings with sobering reminders of a period of brutality and fear. Back to Berlin’s journey is layered with stories of horror and resilience. Each of the group have a connection to the Holocaust and horrific stories of persecution and survival.

Interviews with survivors and their descendants provide a tragic underpinning of the significance of the journey both for the original riders in the early 1930s’ and the contemporary group today. Along their route, that burns through nine countries, they visit multiple sites of 30s’ and 40s’ Jewish persecution, of which members of the group have familial memories attached.

In Greece they encounter the very train wagons used to transport Jews further north to labour and concentration camps, cramming hundreds of men, women and children into a single carriage. Further along they hear stories of executions outside a synagogue in Bulgaria. Though Berlin is the group’s destination, an inevitable deviation claims the documentary’s most poignant moment.

A son brings his survivor father back to Auschwitz for the first time. In a heart-breaking sequence he wanders its empty buildings and barbed remains, stuck by an overwhelming flood of memory, questioning whether or not burying the pain inside for the previous 70 years was in fact a mistake.

Yet, Lurie’s travel-history doc is not only concerned with a Jewish past, it is inevitably a telling comment and reflection on our current world. Contemporary Jewish identity and the importance of the holocaust within that is explored when the group visit a Jewish Summer Camp in Hungary, explaining their route and the purpose behind the mission.

At times Lurie’s lens finds striking parallels between the two eras. When riding through certain countries including Greece the bikers are advised not to display an Israeli flag. Elsewhere thousands of Syrian refugees are fenced off on the border of Serbia and Hungary. A short conversation between the wire sees a Syrian admit he has been taught by his country to hate Israel, but as the bikers point out, the damning repetition of history in this moment reveals a similarity between the plight of their two peoples.

This revelation comes across in their exchange and leaves a sense of optimism in a more tolerant future. And even though Back to Berlin revisits so many instances of atrocity, there is a pervading sense of hope that populates it. In this vein it seems fitting to end on another quote, one said by the survivor to his son as they leave the camp,

“It’s better to come to Auschwitz by bike than by train”.

Back To Berlin is released in UK cinemas on 23rd November.

Featured image courtesy of Cat-Mac and Verve Pictures via IMDb.

Behind the Scenes at NNT: ‘Heather’ by Thomas Eccleshare

Failure to maximise opportunities costs England against the All Blacks