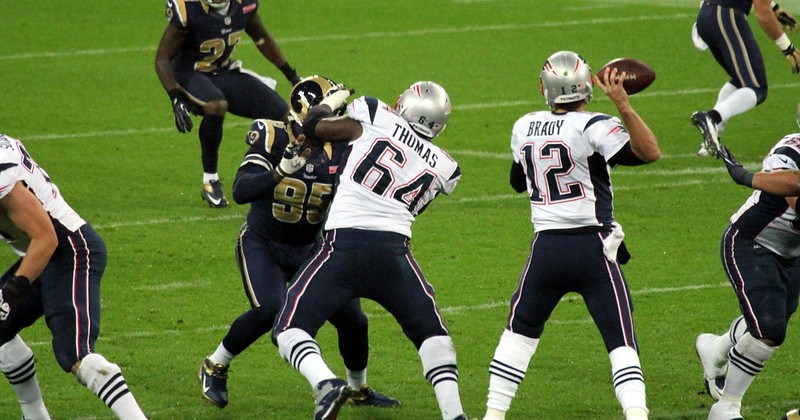 The ‘GOAT’ (Greatest of all time) has become a constant topic of conversation in modern sports. Although it is a subjective term, it refers to the ‘greatest’ player based on their success both individually and as part of a team. For instance, Michael Jordan has long been recognised as the ‘GOAT’ in basketball. But what about American football?

Once upon a time, NFL fans would unanimously say that San Francisco 49ers quarterback Joe Montana was the greatest to ever play the game. And you couldn’t really blame them. From 1981-89, Montana made history by becoming the first player ever to win 4 Super Bowls, remaining undefeated on the game’s biggest stage. It was widely accepted that no NFL player would ever surpass Montana as the Greatest Of All Time.

‘It seems ludicrous to even entertain the idea that Joe Montana is somehow still ahead of Brady.’

But remarkably, sat in the very stand facing the end zone when 49ers wide receiver Dwight Clark made ‘the catch’ to send San Francisco to their first Super Bowl game, was a young boy who – like many – idolised Joe Montana. His name: Tom Brady.

38 years on, Tom Brady and the New England Patriots will once again represent the AFC in this year’s Super Bowl in Atlanta. Making the Super Bowl for the third consecutive year, and ninth time in his career, Brady stands as one of the most successful players to ever set foot on an NFL field, and at 41 will become the oldest quarterback to ever play in a super bowl.

Back in 2017, in the biggest comeback in Super Bowl history, Tom Brady led New England from a 28-3 deficit to defeat the Atlanta Falcons 34-28 in overtime. This win – culminating in his fifth Super Bowl ring – allowed the California native to surpass his hero Joe Montana with 5 Super Bowl championships. Having already surpassed Montana statistically in almost every category, such as career passing yards and touchdowns, to some it was clear that Brady had overtaken his boyhood hero. But to others, Montana was still the real ‘GOAT.’

‘are people really going to ignore the fact that Brady played in twice as many Super Bowls as Montana?’

The following year, the Patriots advanced to last year’s Super Bowl, which they narrowly lost to the Philadelphia Eagles in a 41-33 thriller. Some critics questioned whether losing this game would actually be a detriment to Brady’s legacy.

Nevertheless, this year, the Patriots are once again Super Bowl-bound, as they face Sean McVay’s Los Angeles Rams in a rematch of Super Bowl XXXVI, which New England won.

At this point it seems ludicrous to even entertain the idea that Joe Montana is somehow still ahead of Brady. But there are still some who refuse to accept this.

Here are some arguments used by ‘haters’ to discredit Brady’s success:

“Montana never lost a Super Bowl.” This assertion is frankly ridiculous. Joe Montana represented the 49ers in 4 Super Bowls – XVI, XIX, XXIII, and XXIV, winning all 4 contests. By contrast, Tom Brady has made 8 Super Bowl appearances, winning 5 of them – XXXVI, XXXVIII, XXXIX, XLIX, and LI. But are people really going to ignore the fact that Brady played in twice as many Super Bowls as Montana? Reaching a Super Bowl in itself is a landmark achievement, and to discount 3 entire seasons of making the playoffs, and then winning at least 2 knockout games against the league’s elite to make it to the Super Bowl, is absurd.

“The Patriots always get lucky.”

Another frequent criticism is the idea that the Patriots are seemingly always on the right side of luck, and more controversially, the officials. This plethora of incidents range from the Seattle Seahawks’ decision to throw from the Patriots 1 yard line late in the 4th quarter, only to result in an interception by Malcolm Butler and a Patriots win, to allegations of cheating such as “Deflategate” (2014), and “Spy Gate” (2007).

Perhaps the most infamous moment of all – the “tuck rule” incident in the 2002 AFC Championship game against the Oakland Raiders – saw Brady clearly fumble the football, forcing a turnover and handing Oakland the victory. But the fumble – to much bemusement – was ruled an incomplete pass, courtesy of the “tuck rule”, which had been unheard of until this point. I could go on, but the bottom line is that the Patriots have kept on winning for the past 19 years. Since Brady first won a Super Bowl in 2002 the Patriots have been a constant force in the playoffs, and have made 13 consecutive appearances in the AFC Championship game. Coincidence?

“The rules have changed.”

It is true that in recent years rules have been altered in favour of offensive football. New rules such as ‘roughing the passer’ have been implemented to protect quarterbacks from late hits, or other fouls by defensive players. This certainly would benefit Brady.

However, it is difficult to overlook the fact that Brady has almost twice as many career passing yards, 70,514 to Montana’s 40,551, and touchdown passes, 517 to 273. Even in terms of Quarterback Rating (QBR), Brady has the upper hand with a rating of 97.6 compared to Montana’s 92.3. The latter statistic is the most important, taking into account all aspects of quarterback play, such as completions per attempt and touchdown to interception ratio, to produce a rating. Ok, maybe the rules gave Brady some advantage, but there is a considerable difference between the two. And yes, Brady has played for longer, but in the context of the ‘GOAT’ even this works to his advantage.

Undoubtedly, Tom Brady has profited from having Bill Belichick for the entirety of his 19 year career. In my opinion, and in the eyes of many NFL fans, Belichick is by far the greatest head coach in NFL history. NFL dynasties are only meant to last a couple of seasons, maybe 4 years at the maximum. With the salary cap it is difficult for teams to retain all of their star players as they get older and become more valuable. So Belichick, as both the General Manager and head coach, has had to constantly rebuild his rosters in the draft and free agency. What’s more, the NFL is a league which is designed to make it more difficult for championship winning teams to repeat.

After winning a Super Bowl, the team will have the last selection in the draft and will be handed the toughest schedule based on the previous season’s best teams. But where was Belichick before Brady? He had already been fired by the Cleveland Browns in 1995, and after injury to starting quarterback Drew Bledsoe in 2001, Tom Brady took his place. And he has been starting for the Patriots ever since. Maybe he is a product of Belichick’s system, but he still has a myriad of accomplishments, and regardless of what happens next Sunday he will still hold the following records:

Knowing all of this, it is difficult to argue that Tom Brady is not the greatest to have ever played the game. The Patriots will be facing the Rams on Sunday 3rd of February, at 23:30 BST.

Is Brady the GOAT? Who will win Super Bowl 53 next weekend? Let us know in the comments below.

Featured image courtesy of Mark Fletcher via Flikr. No changes were made to this image. Image license found here.

Trouble in Paradise: Diversity and Inclusivity in Fantastic Beasts

Holocaust: A history that should never be forgotten