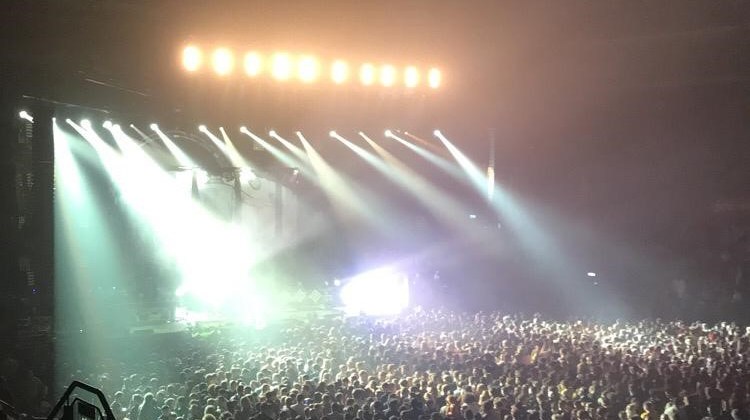 Don Broco, a budding British rock band, played at Nottingham Motorpoint Arena last Friday as part of their 2019 UK tour. The four-piece band announced the tour following the release of their early 2018 album, Technology. The performance was certainly an experience and the audience, which was comprised of a wide variety of ages, were not left disappointed. Since this was my first time seeing the band perform, I was unsure of what to expect, although I was utterly blown away at the sheer energy that was injected into the whole performance.

The first support act was Issues, a rock band from America. They took to the stage at 7.20pm and gave a short but powerful warm up performance. They were followed by Neck Deep at 8.15pm, a hugely popular Welsh pop punk band. Neck Deep succeeded in getting the audience hyped for the headliners, performing 11 songs which included some of their most popular tracks, such as ‘In Bloom’ and ‘December‘. They also did their late 2018 cover of Natalie Imbruglia’s ‘Torn’, which provided a fun twist on the original.

“I appreciated this large mix of all their best work, since it perfectly demonstrated how they are continually developing their music and curating their own style”

Broco, who were due onstage at 9.15pm, opened their set with their song ‘Come Out To LA’, the latest single off the album Technology. They proceeded to play 4 more songs off this album, then played ‘Superlove’ and ‘Money Power Fame’ off their 2015 album Automatic. They continued this upbeat variation in albums before slowing the pace down around halfway through their set list, performing ‘Got to Be You’ and ‘Further’, which are slower, more emotional songs, highlighting the ability of their musical scope.

They also played ‘Priorities’ off their 2012 album Priorities, before returning back to their later two albums. Personally, I appreciated this large mix of all their best work, since it perfectly demonstrated how they are continually developing their music and curating their own style. Towards the end of their set, they played ‘Half Man Half God’, their latest 2019 release. This song is significantly heavier than most of Automatic and Technology and is instead reminiscent of their original work such as ‘Thug Workout’, which they played straight after. Fittingly, Don Broco closed their set with ‘T-Shirt Song’, a song that was written about our very own Ocean nightclub. This felt like a personal and well thought out ending, since lead singer Rob Damiani and drummer Matt Donnelly both attended the University of Nottingham.

“The band looked genuinely happy to be onstage”

One of the most notable features of Broco’s performance was the way in which frontman Rob Damiani dominated the stage. He frequently addressed the back section of the audience as well as those closer to the front, asking people how they were and informing us how good it was to be back in Nottingham, which resulted in extremely good stage presence. Simon Delaney, the band’s lead guitarist, could also be seen performing his signature move, impressively kicking his leg high up into the air.

Drummer Matt Donnelly stood out to me throughout the show, particularly in his ability to provide incredible vocals at the same time as playing the drums. The band looked genuinely happy to be onstage, dancing along to their own songs and chatting in between tunes, which served for a highly enjoyable viewing experience. This energy was reciprocated by the audience, particularly those in the standing area, as Rob encouraged them to participate in mosh pits and crowd surfing, but still urged for the safety of his fans.

The stage set up was relatively simplistic, although the 3 large circular screens that surrounded the band provided a futuristic feel, which was appropriate considering the title and implied messages of their newest album. The screens functioned to show close ups of each of the band members, but also displayed visuals that linked to their songs as well as snippets of people in the audience. Another factor that stood out to me throughout the entirety of the performance was the effective use of lighting, which was often synched to the beat of their songs.

At the very beginning, pulsing blue lights were projected around the arena and you could hear the faint opening lines to ‘Come Out to LA’ before we were plunged into a blackout. This was essential in building anticipation and excitement whilst we awaited their arrival. After a few seconds, the band exploded on stage and a red light filled the stadium as they launched straight into the chorus of the song. The lighting during ‘Half Man Half God’ was also phenomenal, where a formation of white lights and visuals were used in a crazy, erratic manner to mimic the heaviness and complexity of the song.

A figure commonly associated with Don Broco is The Cowboy, a character who features in the ‘Everybody’ music video with his own infamous dance routine, which was replicated informally at the gig. The Cowboy was seen circulating the arena and interacting with fans and at one point, he was placed on a raised platform playing the guitar in the centre of the standing area. This inclusion provided a fun gig dynamic and reflected Broco’s unique and quirky nature.

Something that made the night even more memorable was Damiani announcing that they were using this performance to film the audience for their new music video for ‘Half Man Half God’. There were cameras all around the arena, involving both the standing and seating areas. Damiani even had people in the standing area form a moving circle around The Cowboy, who was situated in the middle, before the beat dropped and everyone rushed in. This kind of audience interaction is further reflective of Broco’s humble relationship with their fans, as they thank them by giving something back and allow a sense of community to be formed.

This gig was up there with the best and completely exceeded any expectations I previously had. As soon as it was over, I immediately started to plan when I could go and see them again, although next time I’m hoping to see them in a smaller venue to see how it compares. I believe that Don Broco are the full package, they are a seriously talented group of people who know how to work the stage but manage to stay faithful to both their style and fans. I look forward to seeing how Broco continue to develop, since they are receiving increasing recognition for their musical ability with each single they release.

Sustainable Travel: The New Trend for 2019

Why are we so obsessed with royal fashion?