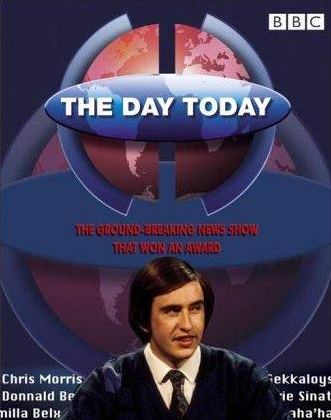 These are some of the concepts you will encounter if you watch The Day Today, Armando Iannucci (The Thick of It, Veep, The Death of Stalin) and Chris Morris’ (Brass Eye, The IT Crowd) send-up of television news. With its bombastic visual effects and theme music, segment-fronters who know very little (and have names like Remedy Malahide) and a Jeremy Paxman-possessed news anchor, it was, as it aired from January 1994 considered ahead of its time.

Nowadays it’s easy to claim that real life has caught up with it, if not in the absurdity of the material, but the way it’s presented. Attention to detail is key – the imported reports from America are tinted yellow, as they looked at the time. The minute changes to the backstory of a death row inmate in a recurring sketch about his execution.

“The field reports are ludicrous, and the edited reports overproduced to genius”

Diplomatic conflicts – domestic and abroad – are stirred by Morris as the anchor, as they are now, with a teeth-grating focus on pundits and columnists confusing their opinions ripped straight out of The Bumper Book of Bastards for news. Morris, continuing a long tradition in his radio work, convinces a man-off-the-street to say he would smother John Major for punching the queen.

The field reports are ludicrous, and the edited reports overproduced to genius. Invariably the account from cast members is that they started to see a change in the way the news was produced, and how the bulletins became the story. Of course, the unspoken real-world targets of the abuse haven’t learned a thing and all evidence points to them using it as a style model. That Rebecca Front and Patrick Marber (both now established names in their own right) both said they’d do it again in a heartbeat in a Radio 4 interview is telling.

Watch it and tell me it is not the world you live in. Life as we know it is still grim, and The Day Today’s news-verse is fundamentally ours.

There are remnants of the time it arrived in – references to John Major and Michaels Heseltine and Portillo – yet still, the whole thing feels like a prophecy. Substitute the politicians of then for now, and what is it? A warning that we’ve failed to heed. A Piers Morgan-instruction manual. So maybe what you should do is buy two copies of the DVD. One for you, to take in the whole mindwhallop, and another to stick in a time capsule buried at the bottom of your garden.

It’s also just unbelievably funny. I want one of you to find me and strike me in the back of the head with a blunt metallic object so I can experience it again for the first time.

The Best Things That Happened in 2018